We Are Family--Not Many Crooks and Not Many Crazy

In the past week I have had several pieces of news from our far-flung family. During the Academy Awards ceremony my father’s cousin, screenwriter John Michael Hayes (known to our family as Buddy), was honored in the memorial video. It was the first that I had heard of his death. Next, I found out that my first cousin on my mother’s side of the family, the Reverend Charles Crabtree, had been named President of Zion College, a Pentecostal Bible school that had recently thumped itself down right in the midst of liberal New England.

Two cousins, two men, so different. The first had worked with Alfred Hitchcock to make the movies Rear Window, To Catch a Thief, The Trouble with Harry, and The Man Who Knew Too Much. He adapted and toned down big-budget melodramas like The Carpetbaggers and Peyton Place so that the movie scripts could pass by the censors. The second was a man of God whose college students are winning over their adopted town by doing the good works that they feel are their calling, working at the local homeless shelter and helping out in the soup kitchens of northern New England.
During the same week, the oldest member of Beez’s family, an Italian immigrant, single lady, and devoted auntie who is now 96 years old, was taken to the hospital in an ambulance and was later returned to her home to continue bossing around her caretaker through another spring cleaning. We are rooting for her, and hope to yet attend her 100th birthday celebration.
Beez and Bucksnort and I find ourselves out here on the High Plains, a tiny little family. Though our parents are gone and our children all far away, we were reminded this week that we are still part of a huge and diverse family. In honor of that extended family, I’d like to share this nice old fashioned poem, written about our relatives by Fern Gallup Kinney (click to enlarge it a bit). It appears in her hand-typed and self-published book, Kith and Kin of the Kinneys, which is the genealogical history of the descendants of Israel Kinney (1738-1791) and his wife Susannah Hood (1745-?), who together had 14 children. It is a remarkable piece of pre-Internet research. If you are a relative (and we are legion--Kinneys, Kenneys, Belyeas, Crabbs, Crabtrees, Gibersons, Kimballs, McGees, Gallups, etc.) you will be interested to know that the entire book is available in pdf format and may be downloaded from http://home.comcast.net/~kinneyed/KithAndKin_image.pdf. If you are interested in this document, I would recommend that you download it, as it seems to disappear from online every once in a while. 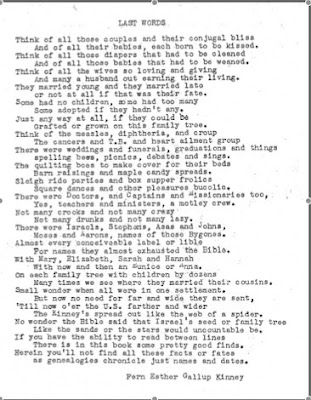 Great post as always! Interesting info about your family! Isn't it fun to catch up now and then? Have a great weekend.