Do inanimate objects have souls?

For many years now, I've watched the decline of this poor horse in the yard of an abandoned house. From the road he looked like one of those mechanical horses outside supermarkets that kids would ride for a quarter. I used to dream of rescuing the poor thing.

This year, as a birthday wish, I gave a sort of hero's quest to my son and husband. Please, please, rescue that horse from that terrible neglect and let me give him a home.

They actually did it! They found the property owner and made sure they would be able to "rescue" the horse. Then they discovered something--this was no mechanical horse on a base that would stand on the ground--this was a horse made of cement! He was extremely heavy and his poor legs were broken off. He needed me more than ever. 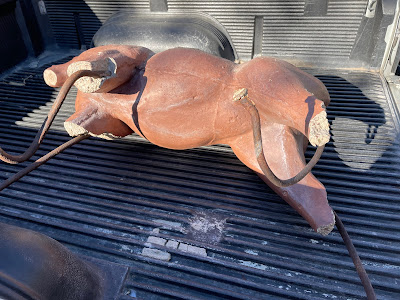 He was in tough shape, and so heavy the rebar bent when they tried to stand him up 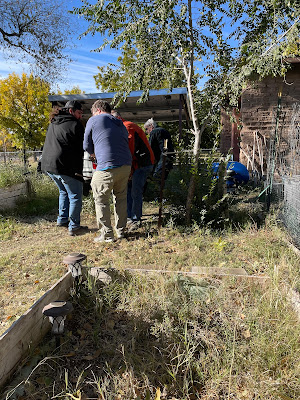 It took a lot of strength to move him into place 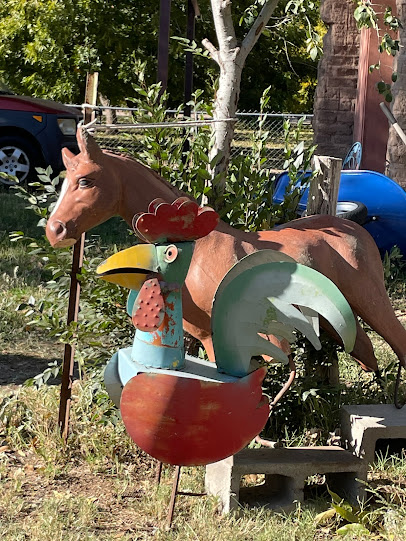 And here he is, upright once again after all those years of lying in the dirt.
His name is Chauncey, after the pony that "belonged" to me on a ranch in Arizona I once visited as a child. You can read about that visit, that pony, and the cowboy who gave him to me here in the post called Tenderfeet.

The Story of Little Toad

Our town has a Trap, Neuter, and Return (TNR) program that encourages people to capture "community," or free roaming unowned cats. The cats are then taken to the local shelter and neutered or spayed, then released back to where they have been living. The hope is that this program will eventually and humanely reduce the population of feral cats.

Cats are apparently marked after the process by having their ears tipped, so they can be easily identified from a distance as already neutered.

I know that this program has been in place for many years--sometimes with government funding and sometimes through the goodness of private citizens.

One little guy who was the recipient of this free service was a young gray and white cat. He was so friendly and sociable that folks wanted to have him taken in by one of the many no-kill shelters here and offered for adoption, but at the time there just wasn't any room for any more cats. So he was released back into "the wild"--his neighborhood near the downtown plaza.

Then fate took a hand. One evening, the director of one of the most successful shelters was dining out with friends at the Little Toad Creek Brewery downtown when the gray and  white cat came up and "spoke" to them. They knew he was asking for a home so they took him along, named him Little Toad, and featured him as the Action Programs for Animals Pet of the Week.

I saw his story on Facebook in mid-July and couldn't believe that he was not adopted immediately. Two weeks later, he joined our family. He made himself at home immediately. He wasn't bothered by the cats or the dogs. He isn't at all shy and greets visitors at the door and shows them to a comfy chair, just like a little maitre d'. 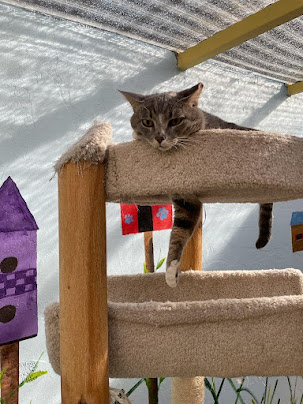 Little Toad at the shelter, waiting... 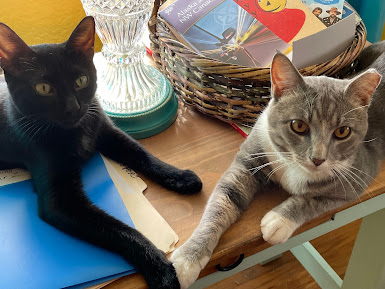 Home at last; best friends with Minky (whose shelter name was Butch Cassidy) 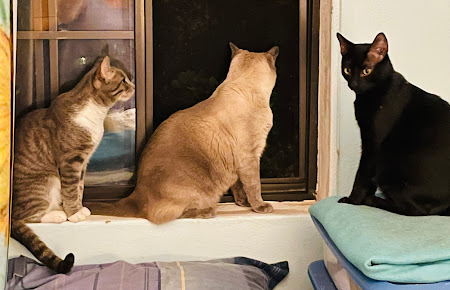 Everyone gets along. L to R: Little Toad, Henry (shelter name Jupiter), and Minky

Hats for the Homeless Shelters

I've been knitting these hats in odd moments--while watching the [mostly terrible] news, listening to Congressional hearings, or during the scary bits in Killing Eve that I don't want to see. Almost all of my backlog of acrylic yarn has been used up now. The hats will go to our public library in November, to be distributed among the homeless shelters in town. 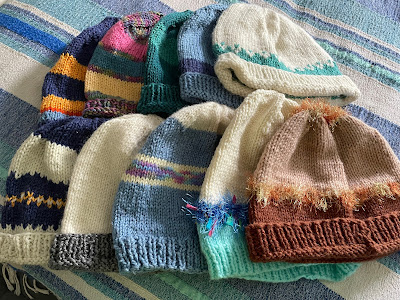 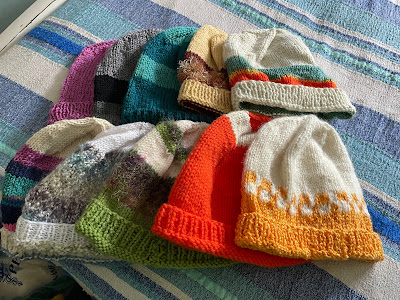 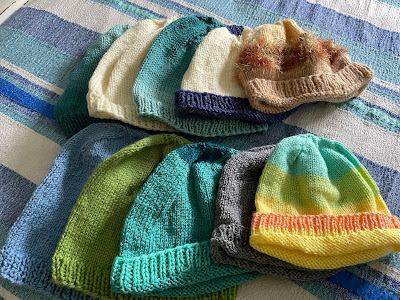 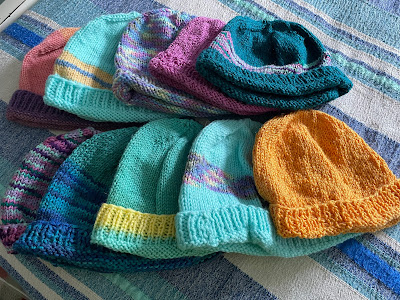 One last pair of gift socks. I think I have reached the saturation point with family members. Our sock drawers are bulging!

Those of you with keen eyes will spot the color mistake I made while knitting and watching TV at the same time. 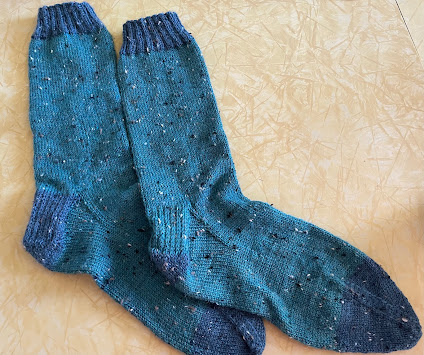 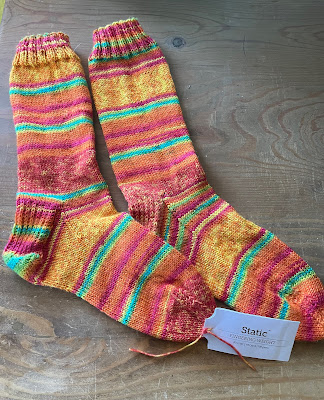 Posted by clairz at 2:31 PM No comments:

39 Hats for the Homeless Shelter

I knit these over the summer. 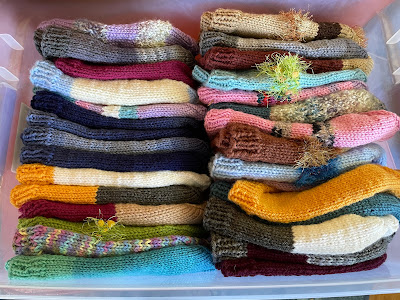 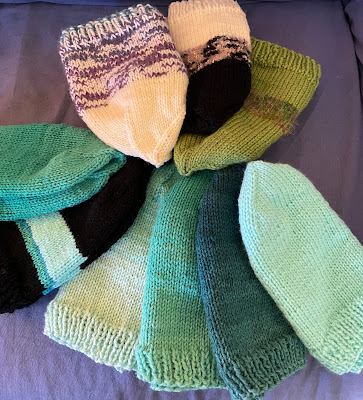 Posted by clairz at 2:26 PM No comments: 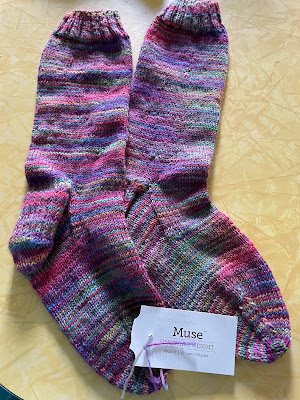 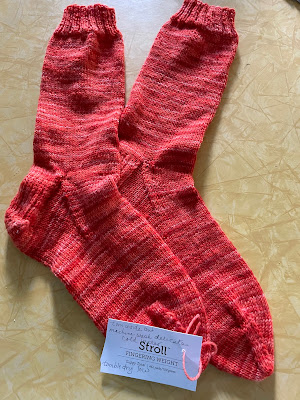 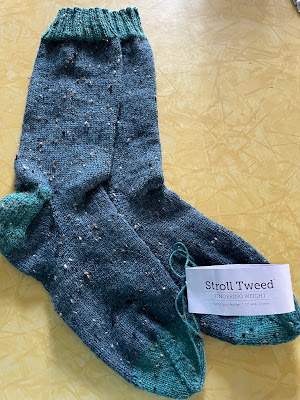 Posted by clairz at 2:20 PM No comments:

Saying Goodbye to an Old Friend

I donated my well-loved and well-used Ashford spinning wheel to the thrift shop today. I seemed to have lost the knack for spinning and my kids--although they had fond memories of this wheel--had no place for it. Besides, it really needed a home where it would be used for spinning, and not just for display.
My favorite local thrift/charity shop, Rock of Ages, agreed to take the wheel, all my spinning tools, and three large bags of wool, silk, angora, llama, and alpaca fibers. I hope that someone will buy it all and will use the wheel for many years. It would be a wonderful Christmas gift for the right person. 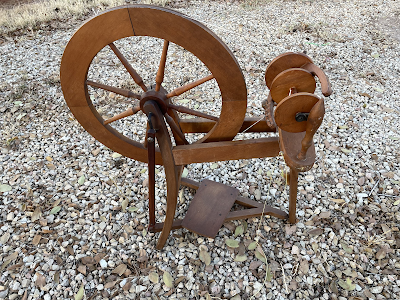 I ordered the wheel in 1975 from the Ashford Company in New Zealand. It came as a kit which I put together myself. It was a great learning experience and I was always glad that I knew every part of my wheel, its name and function and how everything went together. I kept the directions all these many years. 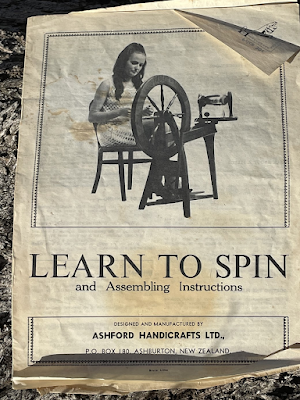 Here I am, back in the day, spinning with a group in a park in Sumner, Washington. At that time, I was an early member of The Moonspinners, a spinning guild that met in the evenings. I also co-owned (with my friend, Marj) a spinning and weaving shop in Sumner called The Country Weaver. 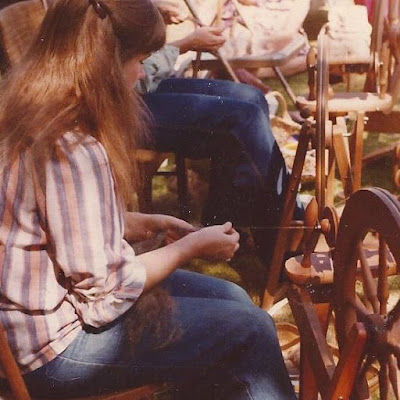 This shawl was my last big project--hand spun, hand dyed, and knit of soft wool. You can follow the whole process in this post, From Sheep to Shawl. 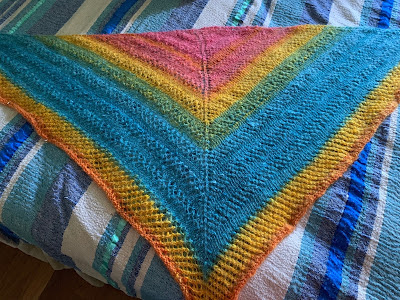 Posted by clairz at 6:37 AM No comments: