My husband and son recently went on the mountain biking adventure of a lifetime, riding the 215 miles of trails and secondary unpaved roads between Telluride, Colorado to Moab, Utah over seven days and six nights. They stayed in provisioned huts along the way as provided by the San Juan Hut System. You can read the trail descriptions, see daily mileage and altitude changes, and even sign up for a ride yourself at the system's website.

Beez was so excited about the trip that he wanted to share it with me, so a couple of weeks ago we set out to retrace the journey, only this time in the Prius with nightly stays in proper inns and hotels. I was so impressed by what they had accomplished! 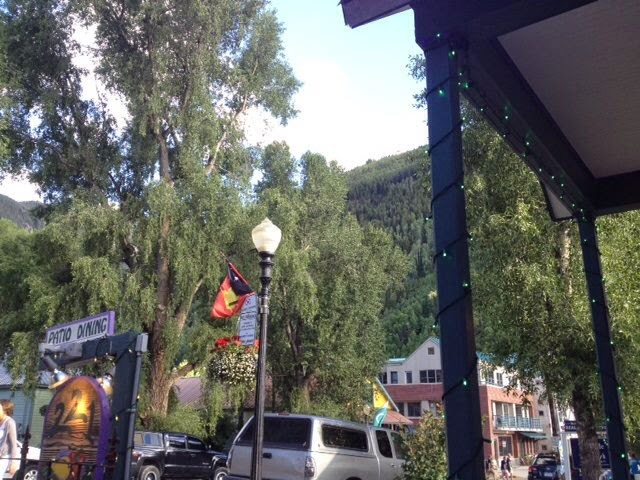 We stayed in an inn in Telluride, Colorado the first night and ate at a pretty little cafe,
where we dined on the patio. The service was terrible, but the people-watching was great! 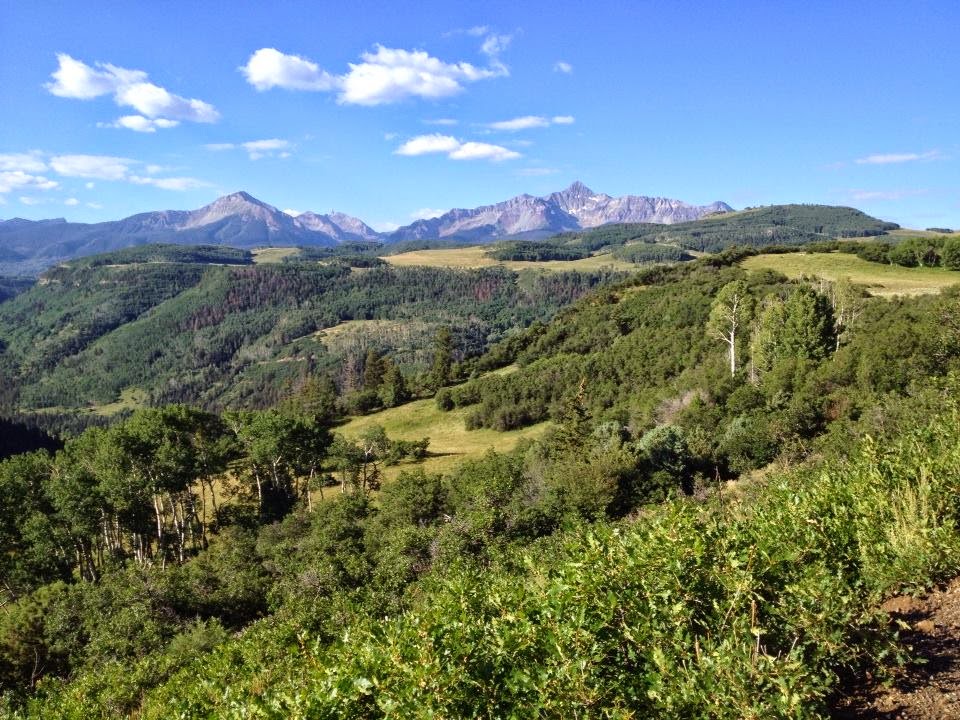 The next morning we drove the beginning of Last Dollar Road outside of Telluride. It was so gorgeous, especially to our parched desert selves. The rivers all ran with actual water! We don't have that in southern New Mexico where we live. 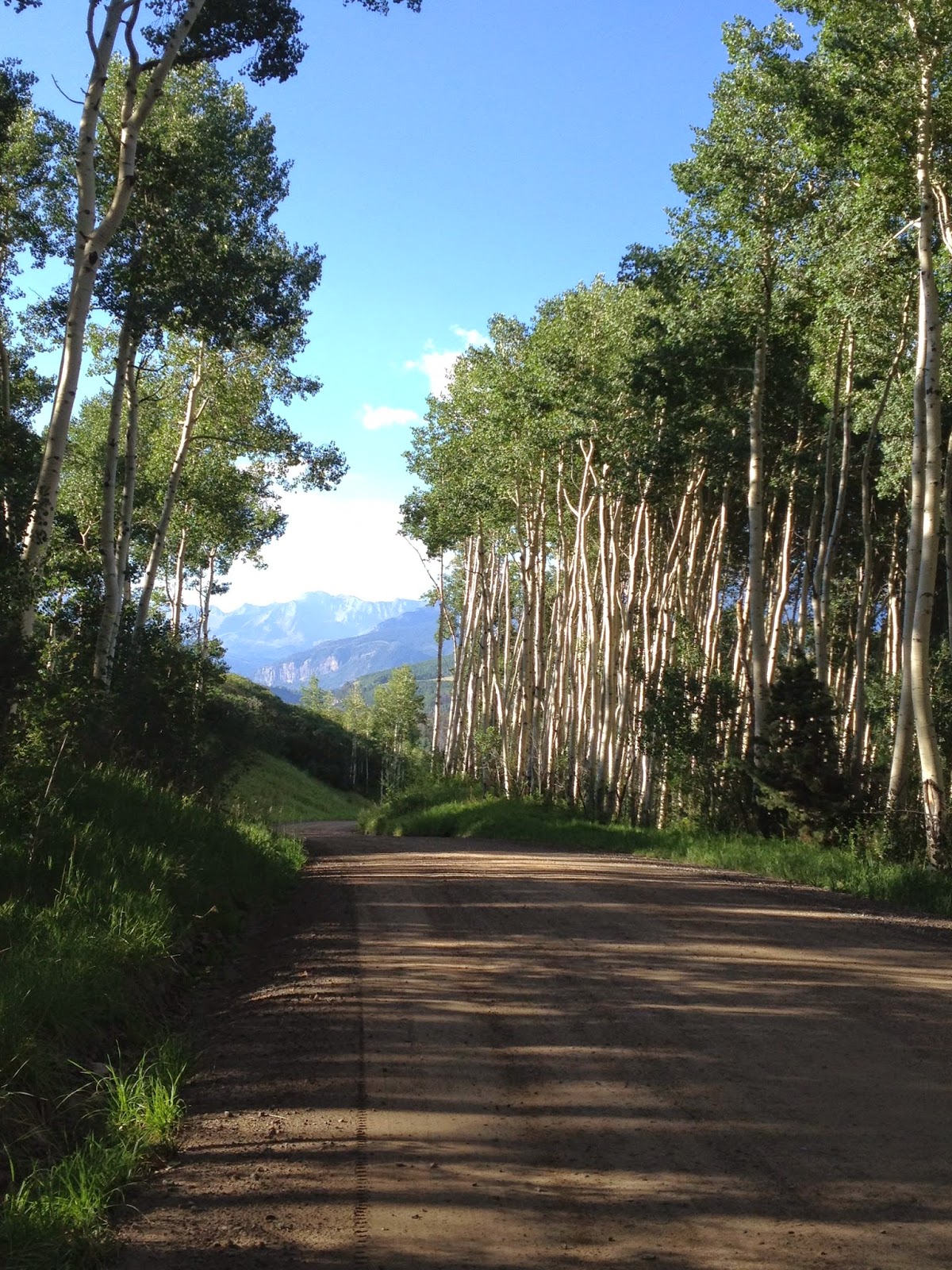 I was very taken by the light on these aspens. 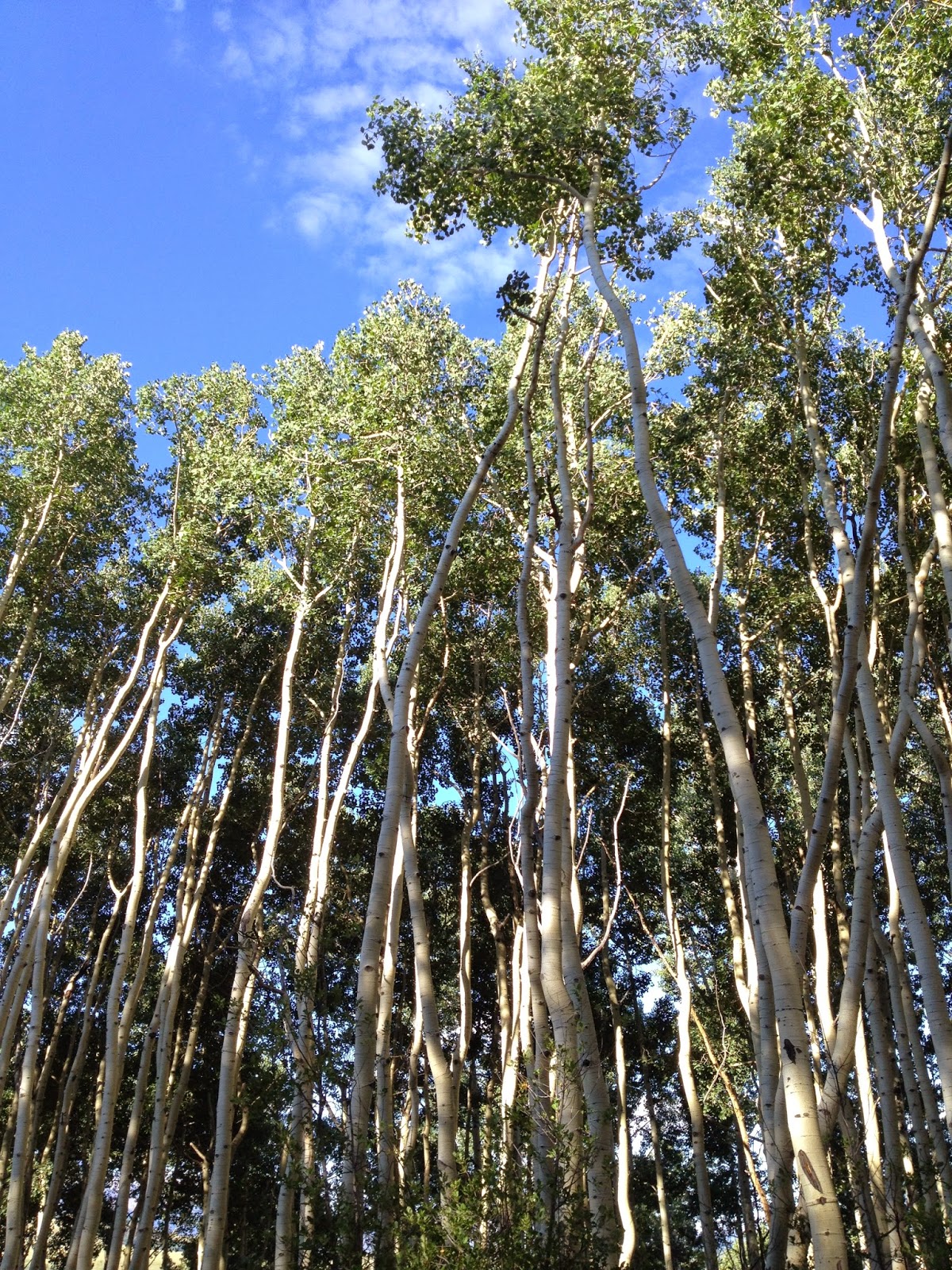 We didn't get much further than these trees. The road became muddy and very trail-like. We turned around and continued the re-created journey on the other side of the mountain. 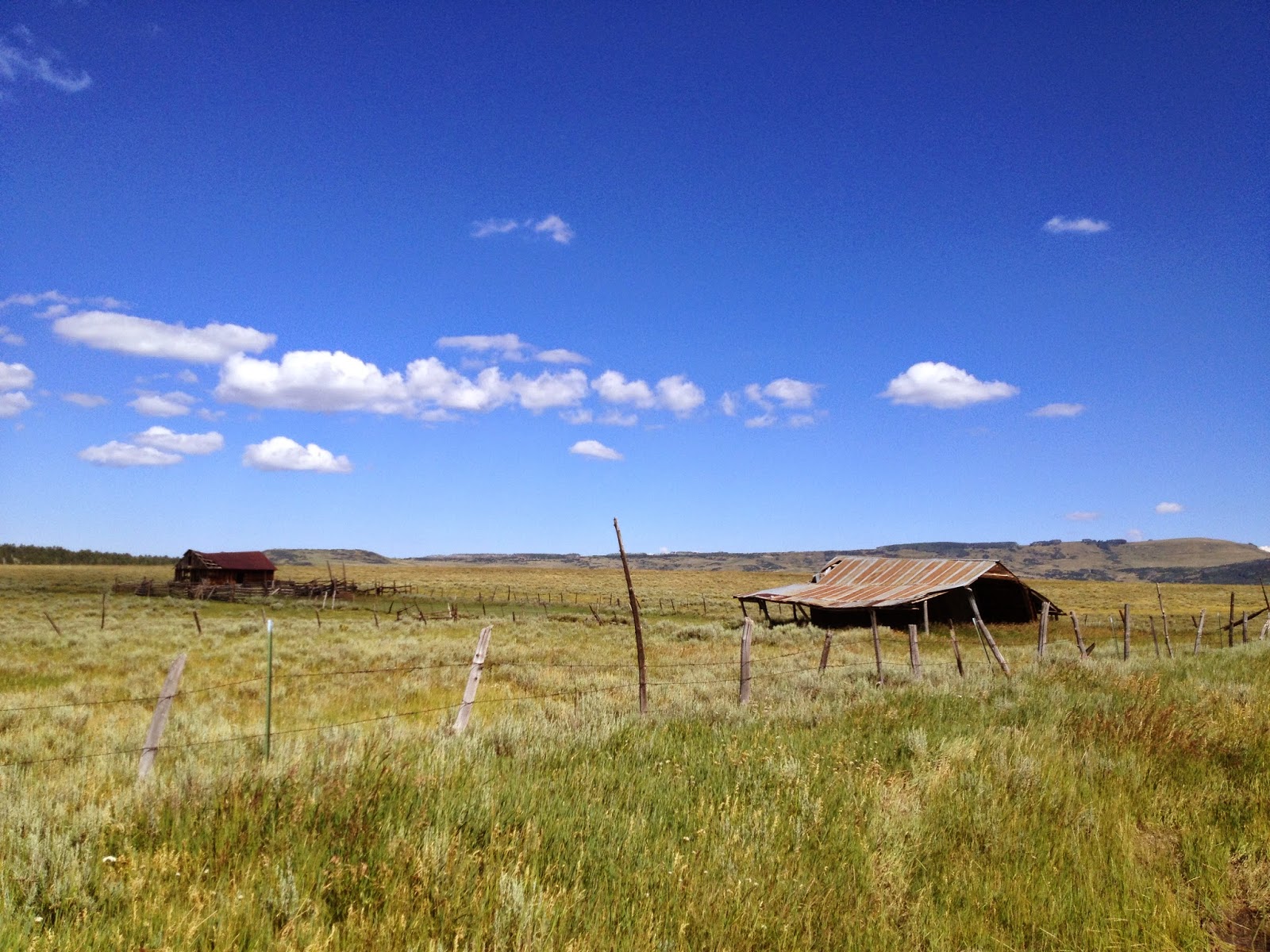 There were wide open spaces as far as the eye could see. This spot was absolutely silent except for the sound of distant hawks. 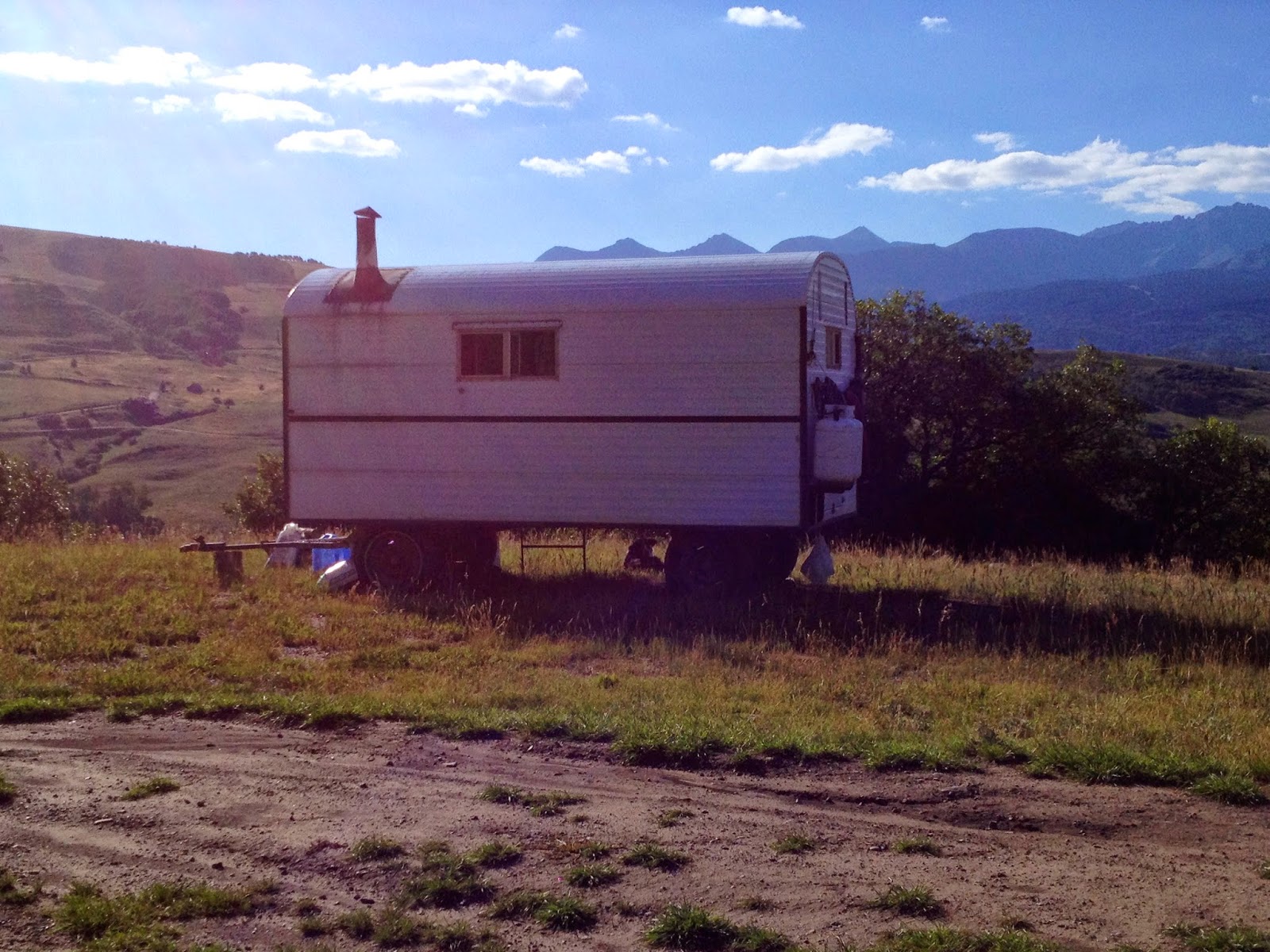 I was fascinated by the sheep herder wagons we saw now and again. At one end of this wagon, the shepherd had hung out his laundered clothes to dry, and his tools and broom were hanging up at the other end; underneath the wagon his working companion sheep dog was keeping an eye on the sheep below. 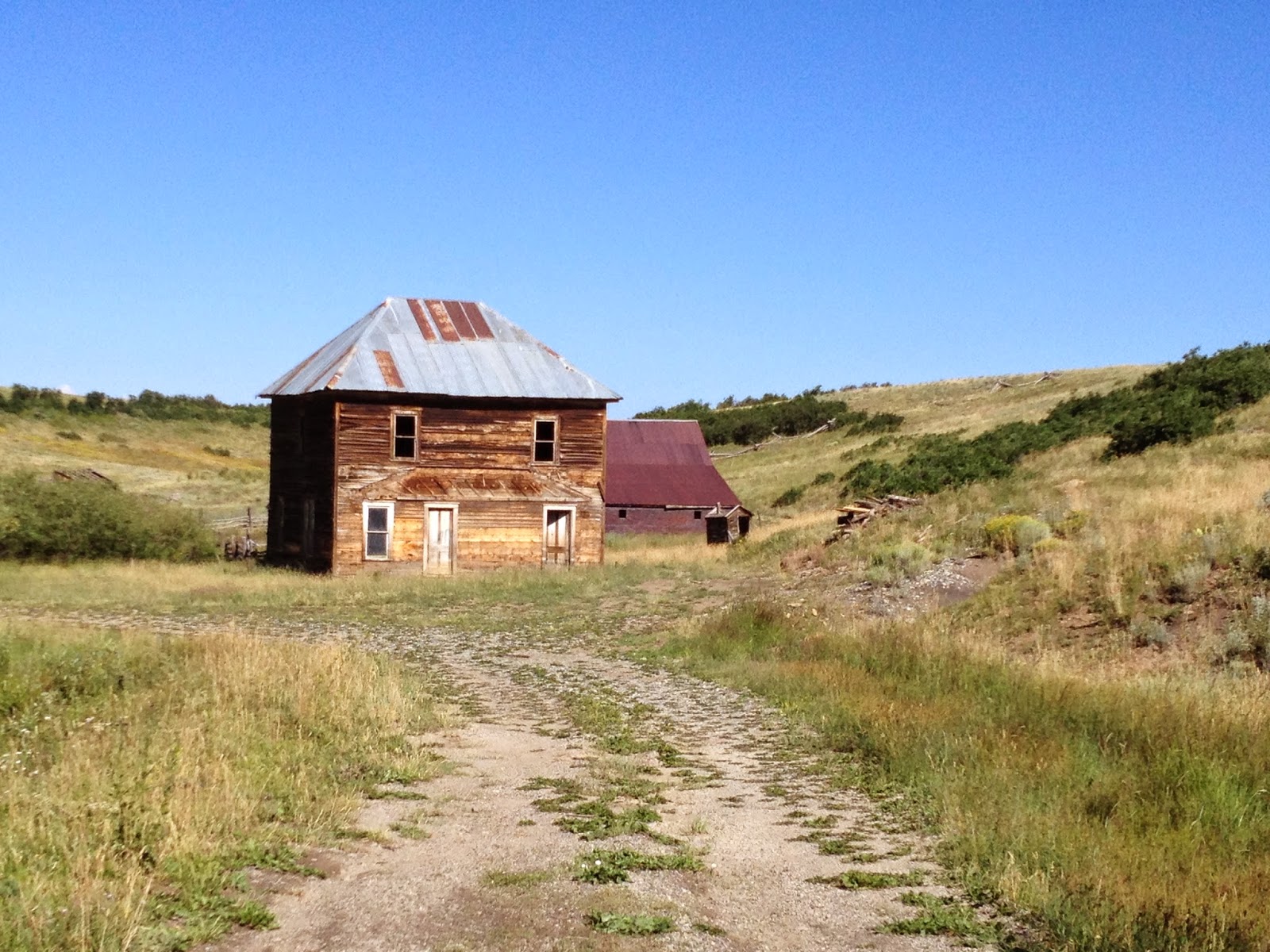 This was an old farm where some of the John Wayne movie, True Grit, was filmed. We stopped to look around and spotted a gigantic herd of sheep being brought down the mountainside across the road. 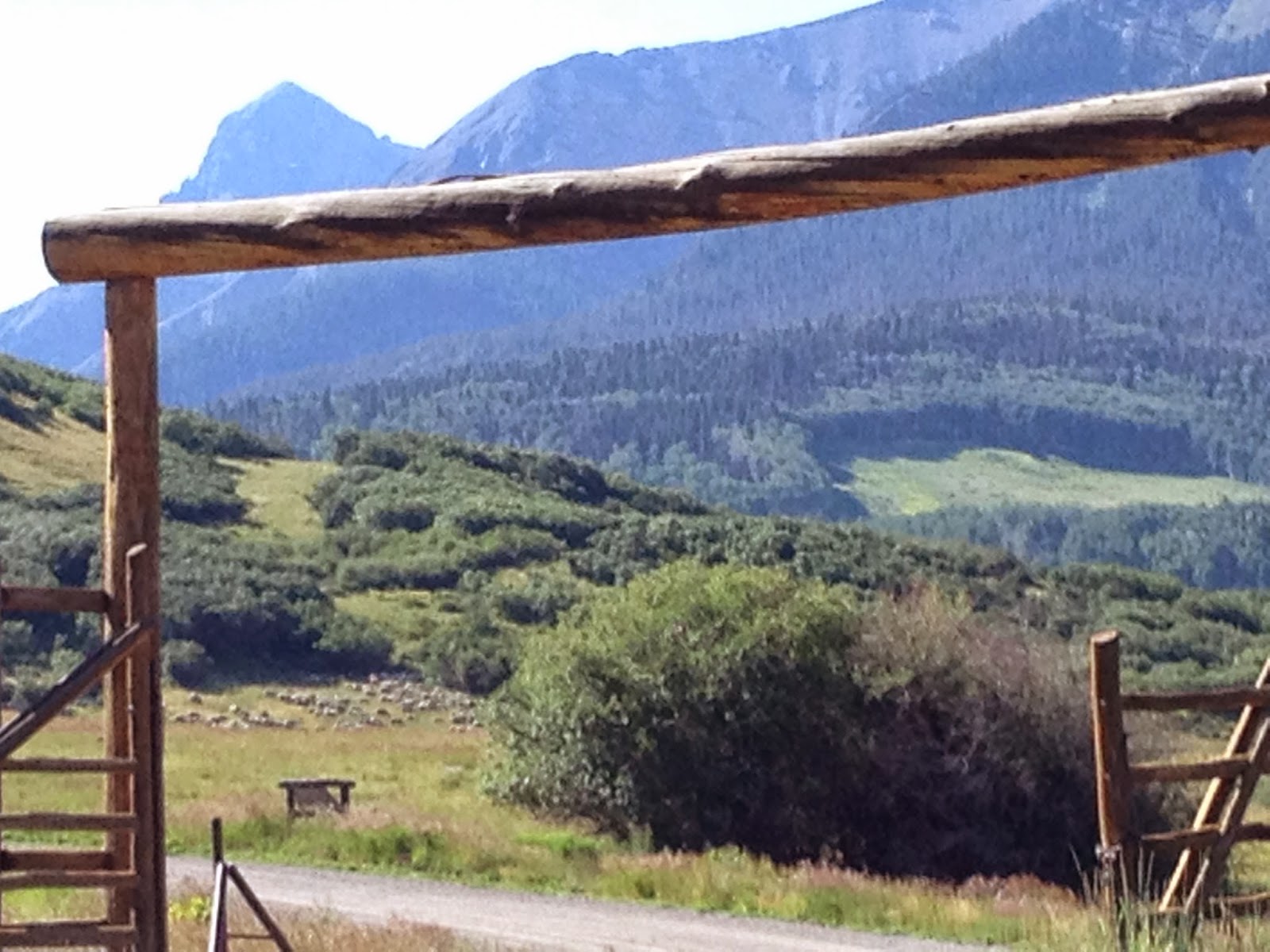 You'll have to look hard to see the sheep, but they were moving beneath all the trees you see on the left, coming down to join the herd and then being moved up the valley by the clever sheep dogs. 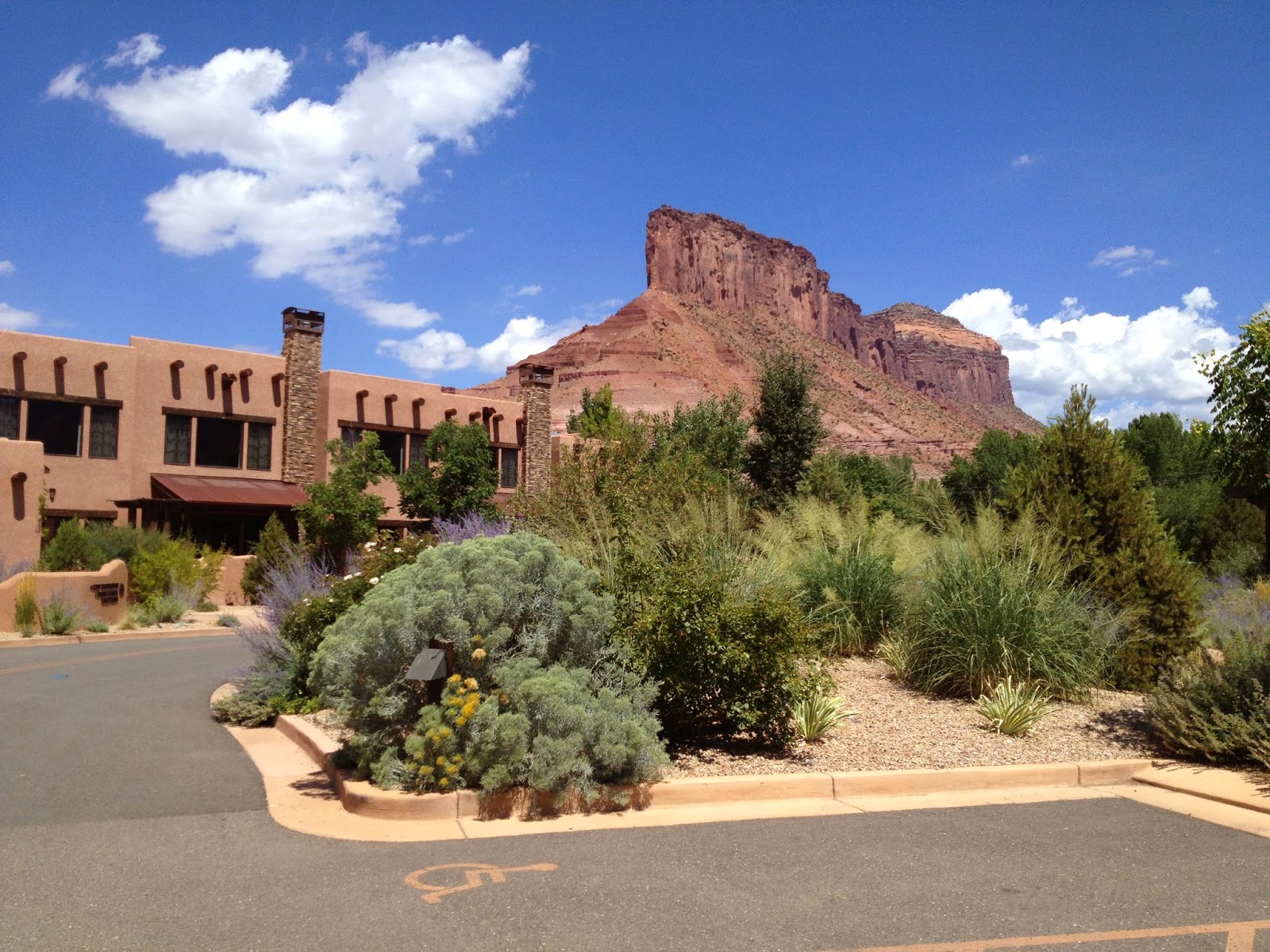 We stopped for lunch in Gateway, Colorado at the Paradox Grille, which is part of the Gateway Canyons Resort. That resort is a beautiful and very fancy place, indeed, with nightly rates in the $600 to $700 range. The Grille, however, was friendly and welcoming and we had a lot of fun chatting with the staff there about biking in the surrounding areas. 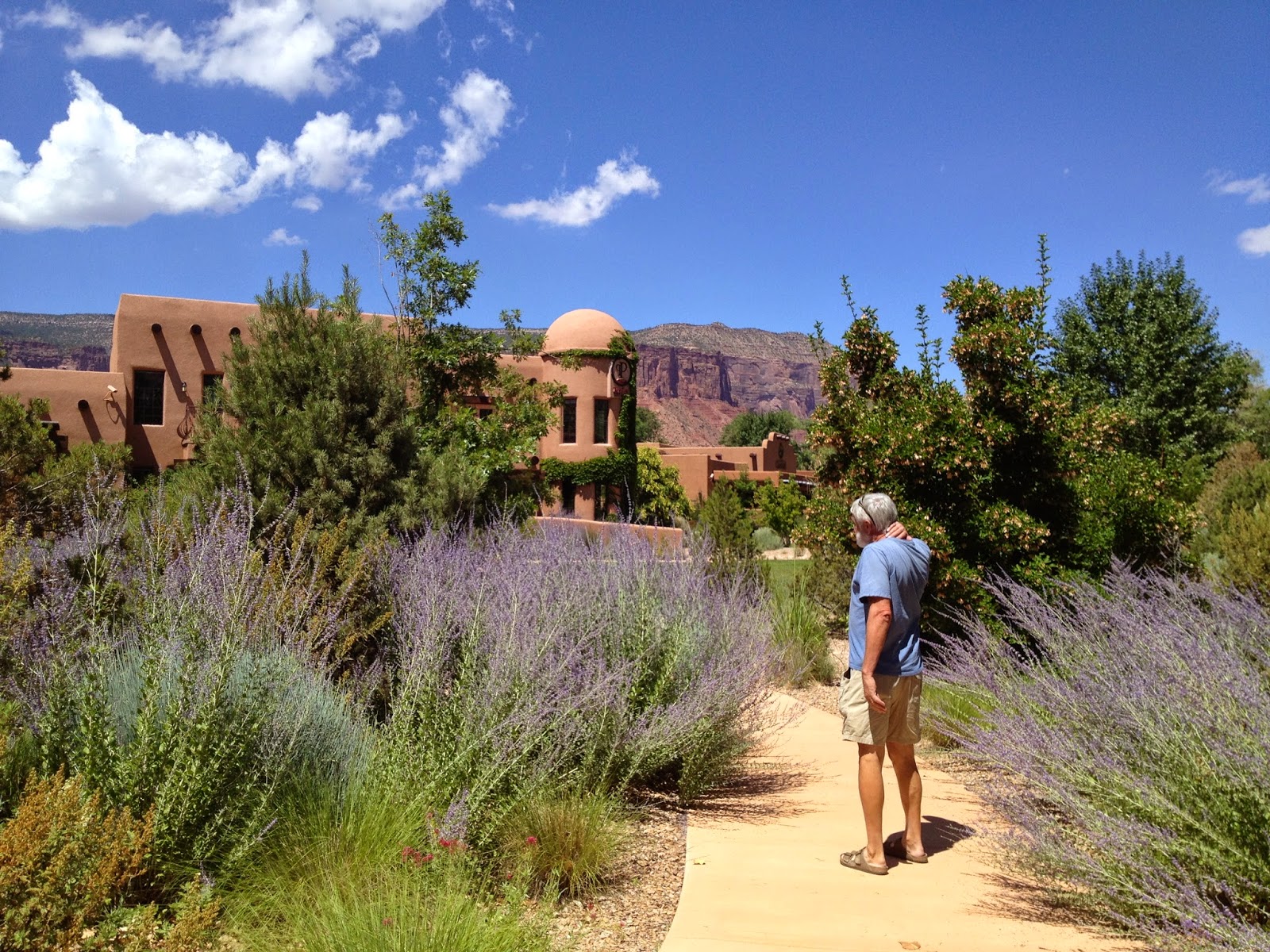 I loved the landscaping at the Resort.
I kind of like that bike-rider guy in the photo, too.

The views in every direction were of red rock mesas and mountains. We had just traveled through the Unaweep Canyon to get there; it was so breathtaking that I forgot to take photos. You can see a photo here or here, or you can search Google images for more. 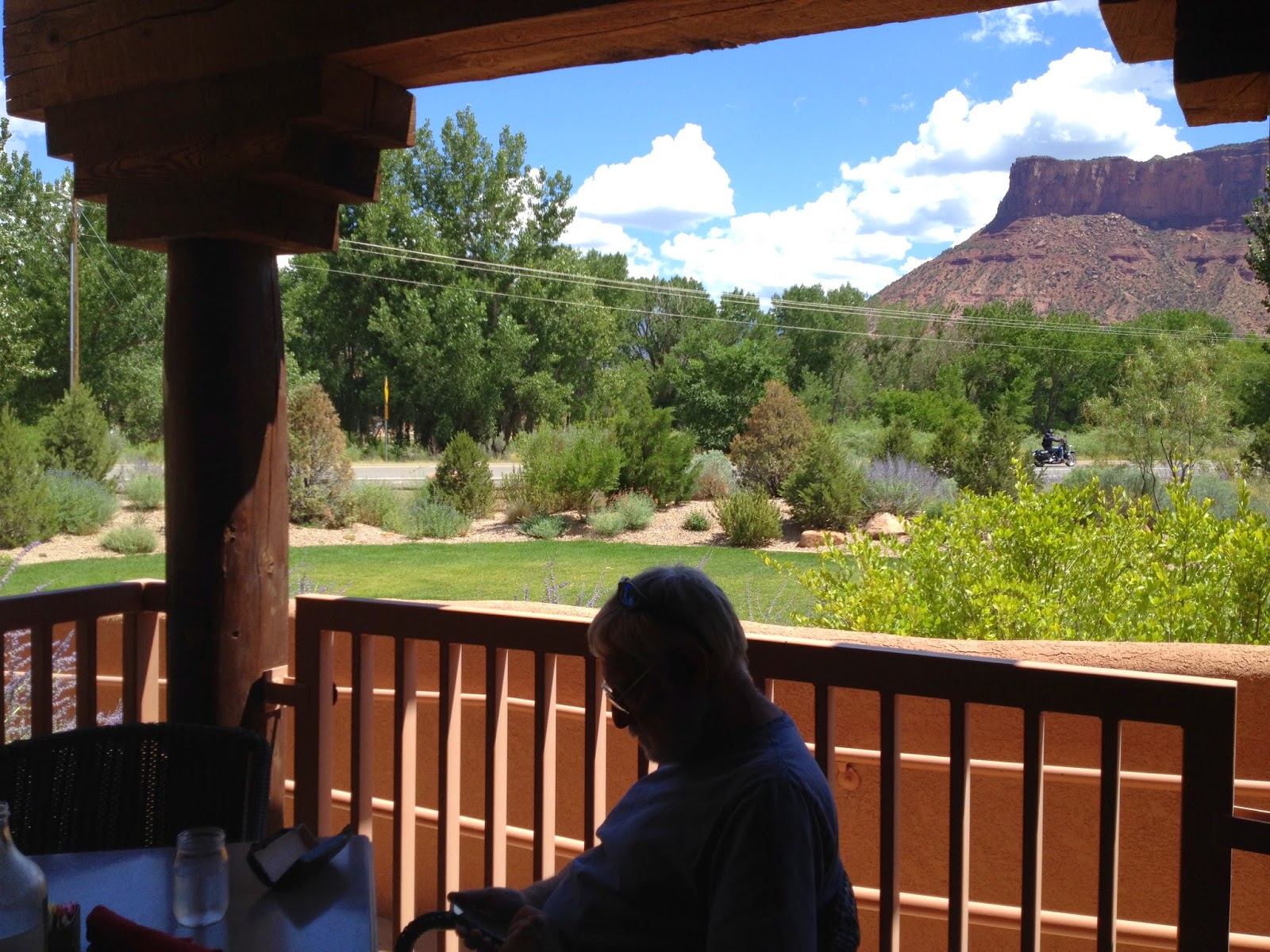 It was a warm day and most of the Grille customers were inside, enjoying the air conditioning. As desert dwellers who don't mind a little heat, we chose to be out on this secluded little shaded patio so that we could enjoy the views and the birdsong. It was lovely, and we had the patio all to ourselves.

Next: John Brown Canyon--not meant for a car, I'm sure, but we did it!

Because I spent part of my childhood living in San Francisco, I expected that our recent trip there would stir some memories, and it did. 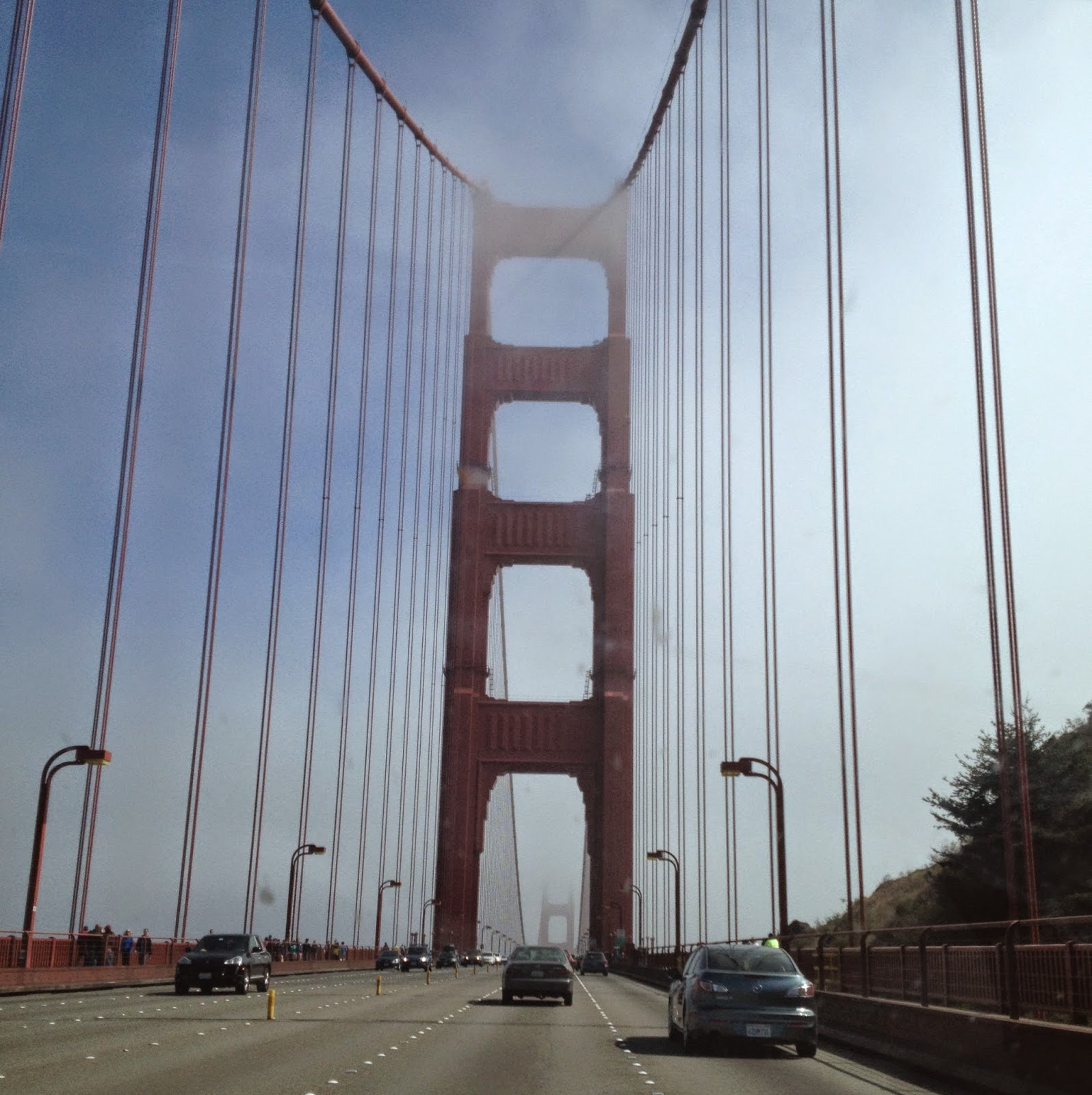 Crossing the Golden Gate Bridge with the fog coming in... 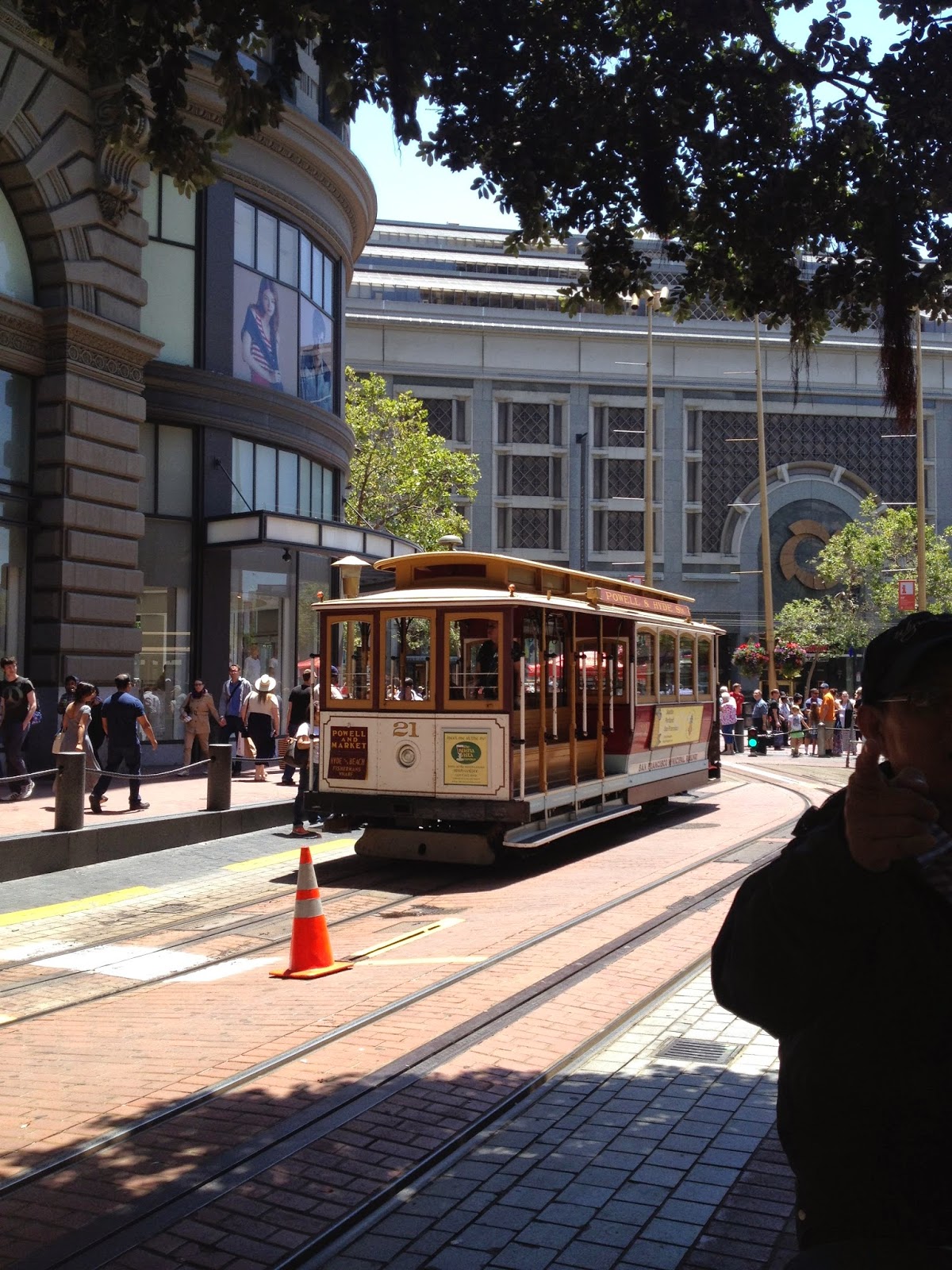 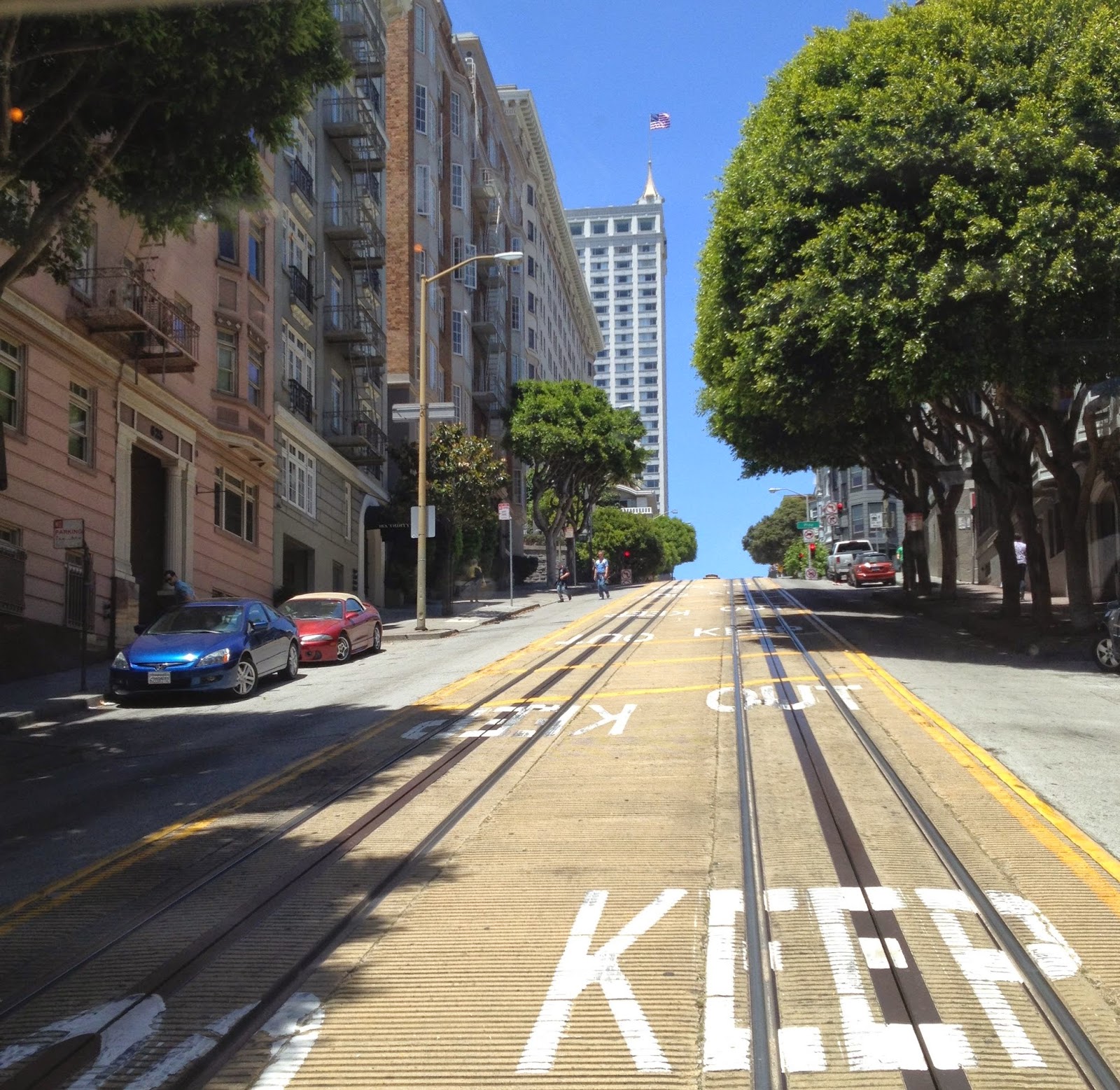 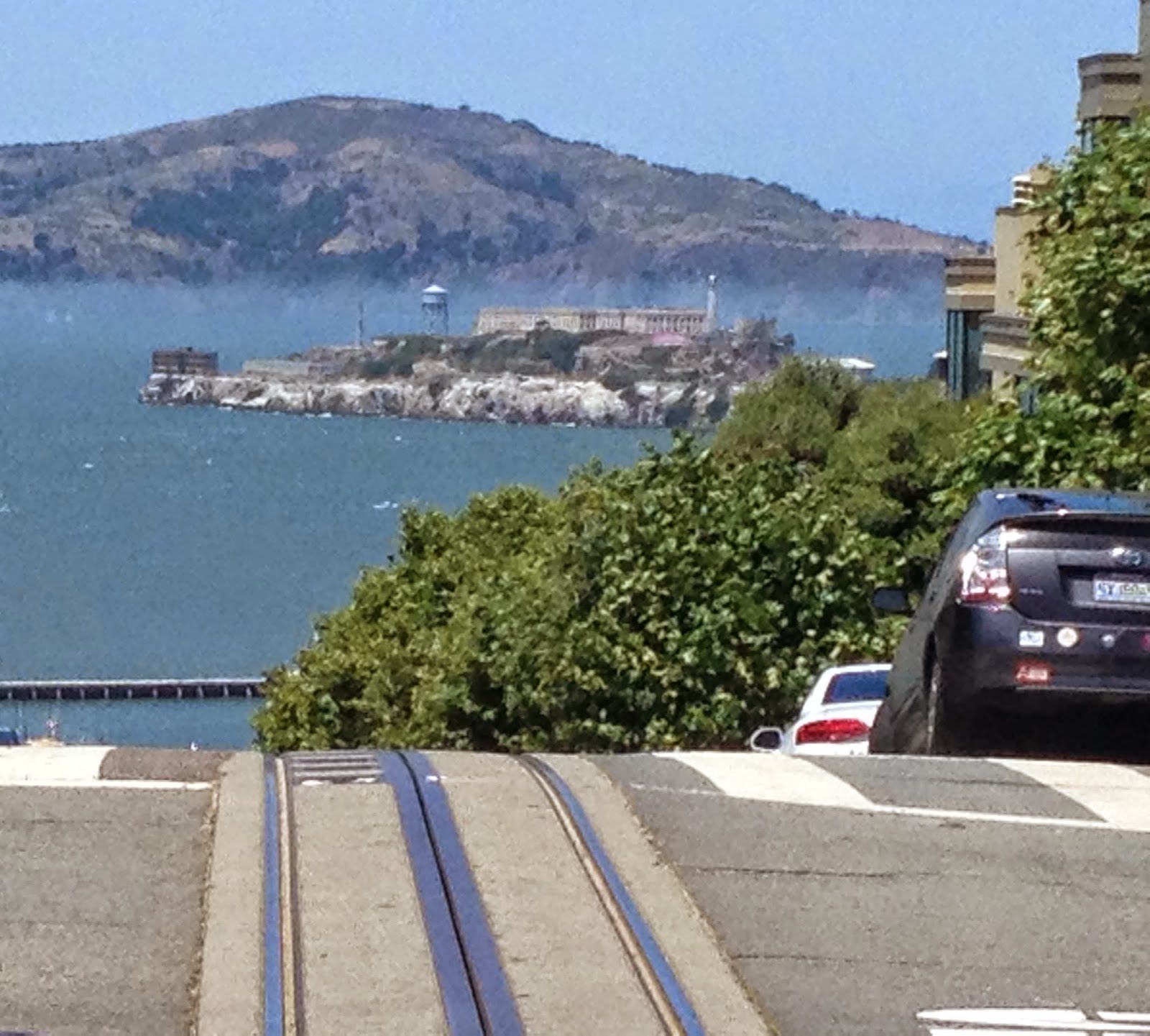 ... and the stomach-clenching thrill of the cable car going down... 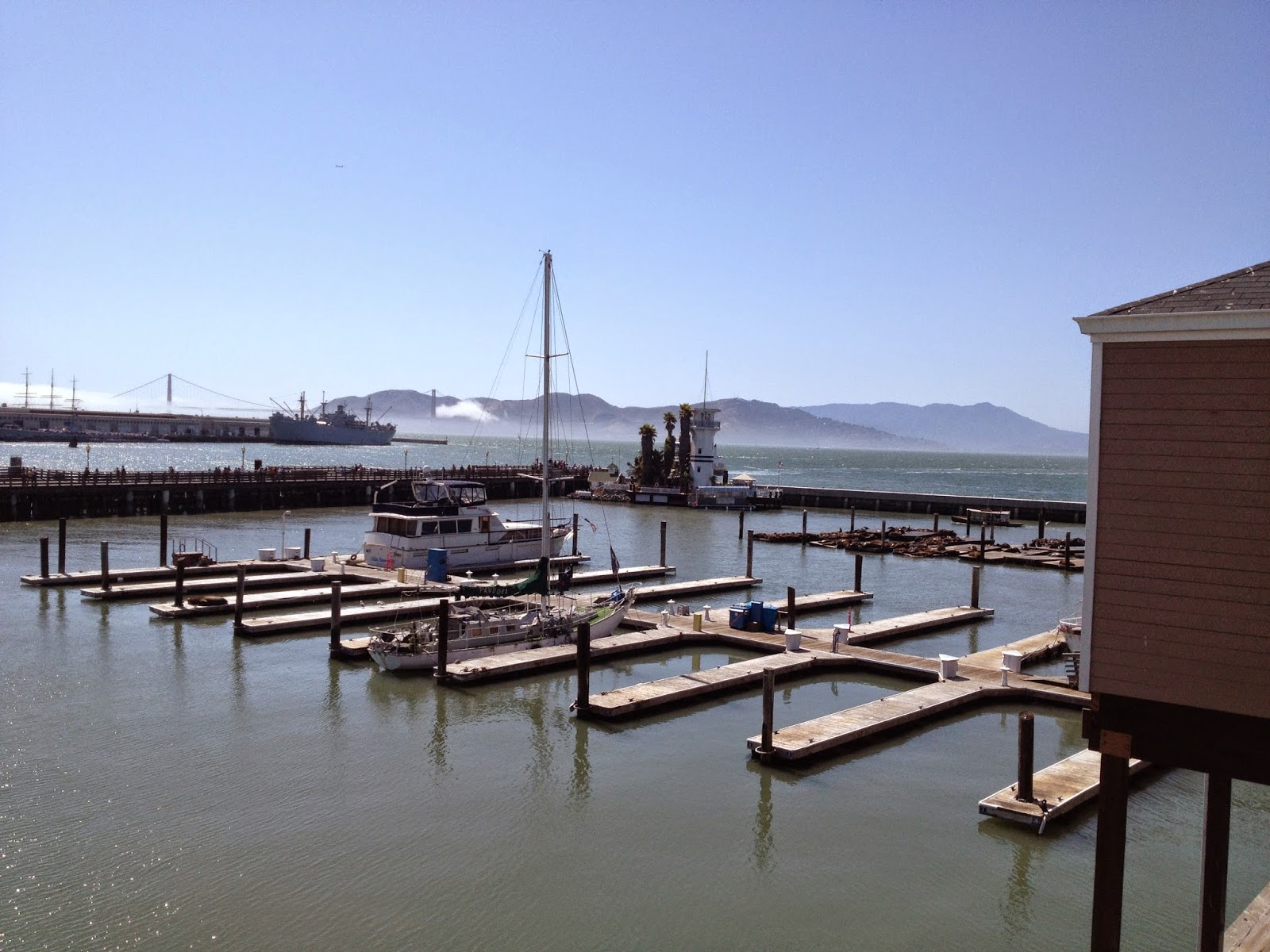 This is a tranquil shot taken out a restaurant window at Fisherman's Wharf (look closely for some of the resident sea lions sunning themselves). The wharf retail area is now much bigger and much busier than the wharf of my childhood, which had maybe three outdoor crab pots boiling for the few people waiting in line to take fresh crabs home with them. Back then in the early 1950s, there were a couple of big restaurants, and they are still there, but now the wharf area is "best known for being the location of Pier 39, the Cannery Shopping Center, Ghirardelli Square, a Ripley's Believe it or Not museum, the Musée Mécanique, the Wax Museum at Fisherman's Wharf, the Aquarium of the Bay, and the San Francisco Maritime National Historical Park" (Wikipedia article, Fisherman's Wharf, San Francisco) 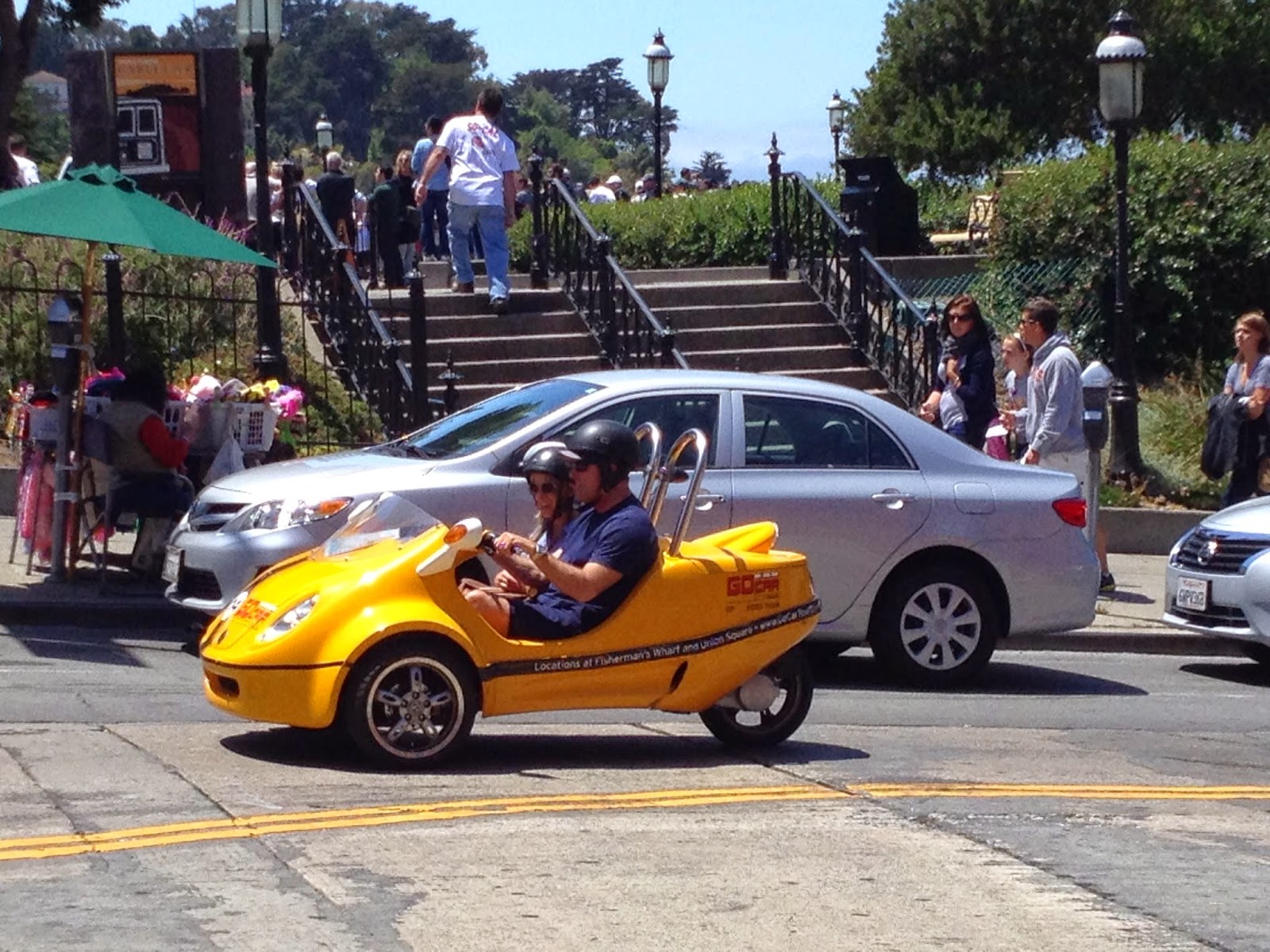 These little three-wheeled rental cars were a new sight to me. 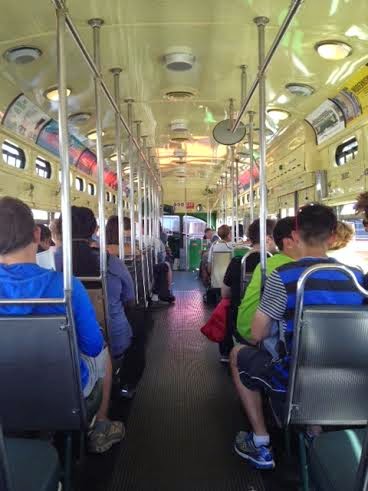 I loved having the chance to ride a familiar street car once again. 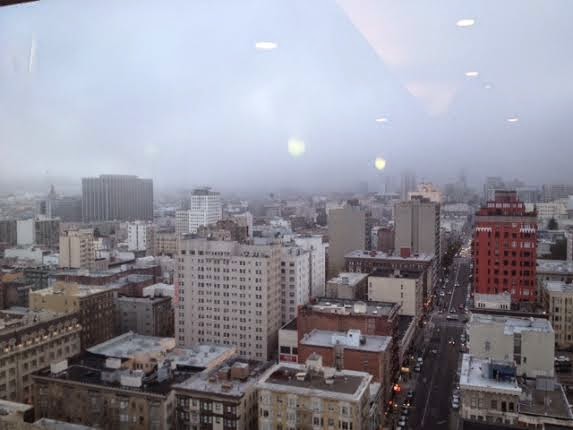 This was the view from our daughter's hotel, the J.W. Marriott Union Square Hotel. You can see our hotel, the King George, somewhere down there. The cool San Francisco fog together with the sound of fog horns and the cries of seagulls took me right back to my childhood... 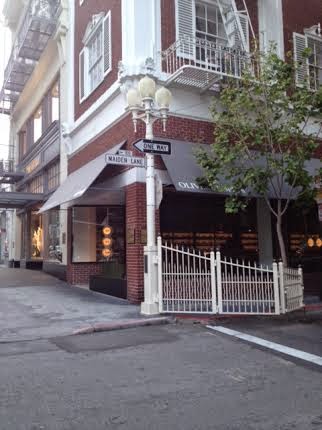 ... as did this intersection. As we strolled back down Kearny Street to the hotel from our dinner at The Stinking Rose, the sight of that gate literally stopped me in my tracks. It was such an unusual sensation for me, but I had the strongest feeling that I had been in this exact spot before. When I looked around a bit, I realized that I was standing at the entrance to Maiden Lane, where my parents had brought us kids to see Christmas decorations every year. I had no idea that the memory was stored somewhere in my brain since we moved from San Francisco when I was only 11, but there it was! 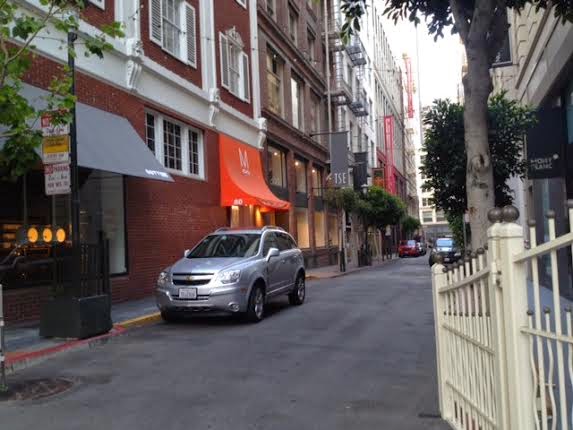 Who knew that this happy street from my childhood had once been at the heart of the red-light district, and that, at one point, the area was experiencing a murder a day! However, enterprising merchants were determined to change it into a destination, and by the time I knew it, the Christmas decorations there were magical. Now it is an upscale shopping area with fancy boutiques, closed to auto traffic during the day.

I loved our trip to San Francisco and feel so lucky to have lived there. Our little row house on 48th Avenue is still there in the Sunset District out by the beach. My parents sold it for $11,000 back in 1955. We could never afford it today!