From Messy Storeroom to New Bedroom on a Budget

We would love to have a master bedroom suite opening into a private courtyard, and Bill figured out a way to make it happen without moving to another house: We would take our messy back room, which had turned into a jumble of junk when we refinished the floors in the front of the house, clear it out and fix it up, then have a wall built around the patio just outside its door. Why not?

We have been hard at work on the first phases of the project, clearing out (Bill) and painting the room and making curtains (me). First, take a look at the mess we had made by just ignoring this potentially nice room. As we had worked on other house projects, we kept shoving stuff in and just closing the door, resulting in this embarrassing jumble which we wouldn't normally show to anyone:


The following photo is not from our house! 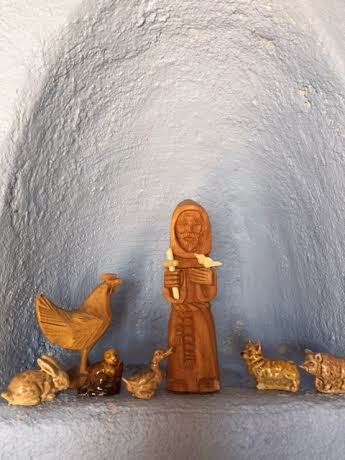 The little nicho holds a carved Saint Francis that we bought in Taos;
he is surrounded by Red Rose Tea animals that I collected
from boxes of tea when living in British Columbia.
That big wooden rooster just barged in from somewhere.
Bill calls this "Frankie and his pets."