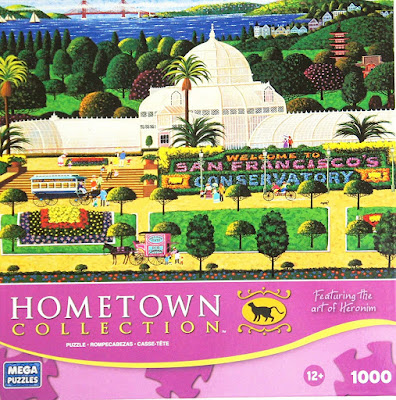 I'm working on this puzzle and it's bringing back so many memories of my childhood in San Francisco--waking up to the sound of foghorns and seagulls, riding my bike around the block in the fog, going by streetcar to the children's room in the big library on 19th Ave., getting lost in Golden Gate Park, going to Fisherman's Wharf with my parents for fresh crabs (and later sneaking the stinky shells into the trash cans down by Ocean Beach).
We lived in San Francisco from 1945 to 1956. I arrived as an infant in a little Ford with my parents who had driven cross country from Maine. At first we lived in housing for naval workers at Hunter's Point. At some point my parents were able to purchase a house on 48th Ave., just one block from the beach. When I was five, my little sister was born. (Note: My parents sold that house in 1956 for $11,000. Houses in that neighborhood are priced in the $750K's now!).
It was such a different time for a child. I rode my bike anywhere on the block as long as I didn't cross any streets. There were three taverns on that block and I would hold my breath as I passed to avoid the smell of stale beer and cigarette smoke. There was also a lady who lured children into her house to teach us Bible stories with a felt board. I went for the felt board, which fascinated me. I don't think I ever mentioned this adventure at home--not because I was being naughty, but just because kids' activities weren't generally a part of our dinner table conversations.
A neighborhood friend and I took her doddering old grandpa on a walk to nearby Golden Gate Park where we all got turned around for a bit before finding our way home again. I wonder if my parents even knew we had gone. We were probably around seven at the time. 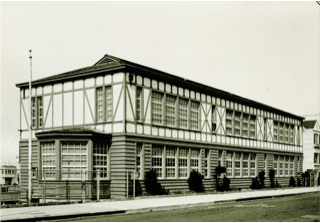 Francis Scott Key Elementary School, opened in 1908. In the late 1930s a more modern FSK school opened, but this old building, known as "The Annex" when I attended K-3, was still in use in the late 1940s
When I was ready to go to kindergarten, my bachelor uncle (unfamiliar with children, I imagine) walked me there on the first day--down 48th Ave. to Judah Street, then up Judah to 43rd Ave. The second day he sent me to walk there on my own. To my credit, when they eventually found me, I was standing in front a big house painted in the same brown and yellow colors, but many blocks away.
I walked a couple of blocks down 48th Ave. when I was probably in 4th grade, to a skating rink to take ice skating lessons. Once again, by myself. No one hovered in those days, and the term "helicopter parent" had yet to be invented.
Eventually I was allowed to go on the streetcar by myself to the library--what an adventure! I would take out as many books as the librarians would let me pile up and would start reading on the way home.
Going back to work on my puzzle now.
Posted by clairz at 11:54 AM No comments: