Have you ever heard of a place called Pie Town, New Mexico? I had read about the area in the book, Pie Town Woman, by Joan Myers, which chronicled the struggles (and the joys) of hard-working men and women scratching out a living there during the Thirties. I had seen Depression-era photos of its people by Russell Lee in a local museum, but I had never actually been to the town. Now I have, and I want to go back. 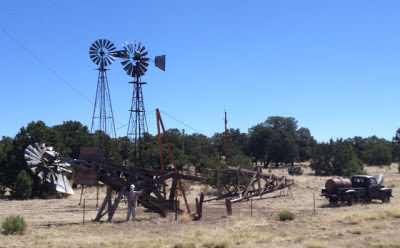 It's a small place far from the nearest city, but the people were friendly and kind (we saw a car steer carefully around a snake crossing the road) and the owners of this windmill museum stopped by while I was taking photos from the fence. They invited us to visit the free museum any time and said they were open 24/7. We were at the beginning of a big road trip and couldn't stay, but promised that we would be back to see the old log cabin on the property. 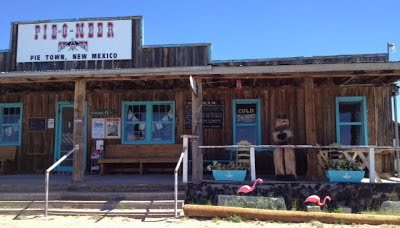 We did, however, stop for pie at the Pie-O-Neer. No one bothers with a menu here: The self-proclaimed "pie traffic controller" pointed us to the big shelf of fresh pies, all cooled just enough to eat and with hand-written labels.

Beez (of course) chose a slice of the Apple-Green Chile, and I picked Apple-Pear-Ginger with a crumb topping. The pies were scrumptious, and the coffee was strong and hot. It's a bit of a drive to Pie Town, but here in New Mexico we think nothing of driving a couple of hundred miles for a green chile cheeseburger,* so why not a Pie Town road trip? We'll be back for sure for the annual Pie Festival, always held the second Saturday in September. That will be September 14th this year, so mark your calendars and we'll see you there!