What We Did On Our Summer Vacation

You'll have to pardon my excitement, but this was our first trip to Europe, so you'll be hearing a bit more about it. I thought it might help if I told you all the places we went.

First, we headed to New York from El Paso, so that we could meet up with our son, who was traveling onward with us. Because we are such country mice and were quickly exhausted by wandering around crowded Manhattan on foot, we made our way to this peaceful sanctuary of a cemetery just across from the World Trade Center site.

The next day, we left New York and headed for Iceland, where we had a very brief layover--just long enough for a beautiful open-faced smoked salmon sandwich. Yep, it's always about the food with us.


After our late-night "lunch" in Iceland, we headed off in the summer twilight (it doesn't really get dark this time of year in Iceland) and on to Paris. Pausing just long enough to figure out the controls on the rental car and to program the navigator, we headed south through the Loire Valley to the beautiful blue-shuttered house, Les Volets Bleus, that we had rented for the week. The link below the photo will take you to many more views of the lovely interior. It was a dreamy place to stay, and it was all ours--for the week, anyway.

After an all-too-short week in the countryside, visiting chateaux and abbeys, street markets and gardens, beautiful villages and the sea, we drove back up to Paris and turned in the rental car. From that point on, we explored Paris as the Parisians do--on foot, by metro (subway), by boat, and by le taxi. But not by bike or Vespa--I drew the line there!

In Paris, we visited museums, strolled through parks and gardens, ate at sidewalk cafes, became philosophers for an afternoon, indulged ourselves at the Angelina Tea Room, and took an evening boat ride on the Seine.

Then we flew back to Iceland, swam in the geothermal waters of the Blue Lagoon, and continued on to Boston. In Boston, we did a bit of shopping and a bit of eating (you're not surprised by now, I'm sure), then drove up to New Hampshire for two days of visiting, partying, and reuniting with old friends. And then we flew once more, back to El Paso.

Phew. It's no wonder that some mornings I wake up wondering which hotel I'm in, and which language I'm expected to understand for the day!
Posted by clairz at 2:36 PM 8 comments:

Angelina: "A Genuine Romantic Poem," and Quite the Tea Room!


Here is a quote for you from the Angelina website:

...the Angelina tearoom has established itself as a high point of Parisian gourmet pleasures, Angelina became a must-not-miss venue for the Parisian aristocracy. There, Proust, Coco Chanel and the greatest French fashion designers were to be found… The decor designed by the famous Belle Epoque architect, Edouard-Jean Niermans, combines elegance, charm and refinement. Angelina is a genuine romantic poem, a quiet and voluptuous venue, between serenity and gourmet pleasure.

And here is the recipe for a lovely day: Stroll through the Tuileries Garden in the first arrondissement of Paris. Have a leisurely luncheon at a sidewalk cafe. Work off just a few of those calories in a stroll down the street, then join the line at Angelina. Don't worry, the wait will be worth it.

Because of the line, I was not able to photograph the elegant entrance, but you may see it here. Once we got up to the doorway, the delicious anticipation began with our first glimpse of the teas, chocolates, jams, and of course, the lovely macarons that were offered for sale. 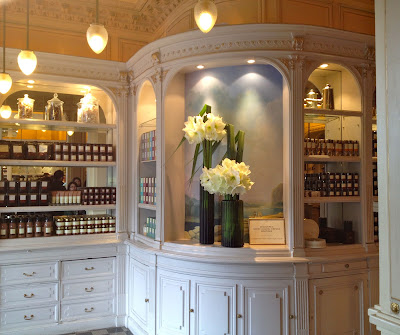 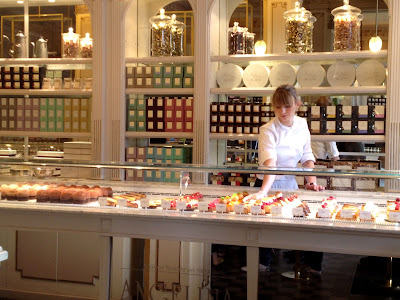 As the line inched its way forward, we could see into the seating area upstairs: 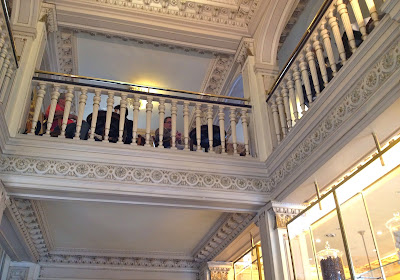 We were soothed, we chers clients, with this gracious sign asking for our patience. By this point in our vacation, I have to tell you that after our total immersion in the language out in the countryside, we simply read the words en français, and ignored the English translation: 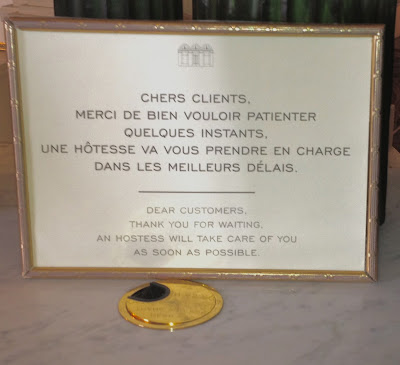 One more tantalizing glimpse of the glories ahead, of the glittering room dripping with crystal and gold and mirrors, and then we were escorted to our table. 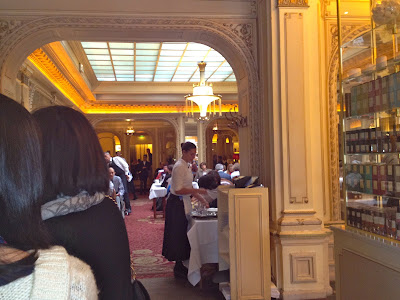 A sandwich at Angelina will run you 21€ (about $26 US), but we were there for the signature chocolat chaud à l’ancienne dit “l’Africain--Old Fashioned Hot Chocolate L'Africain--with a little sampling of mini-macarons in framboise, pistache,  caramel beurre salé , and mont-blanc.

The macarons were ambrosial. The chocolate was delicious, fragrant, and impossibly thick. Served in little pitchers, with mounds of cream on the side, it was beyond elegant. And for 7.9 € per cup, we bought ourselves the whole lovely experience.*

And we were worth it. 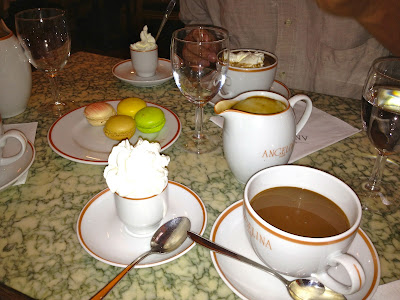 *I don't mean to be crass with all this discussion of money, but I would want to know these details if you were writing about your once-in-a-lifetime trip to Paris! You can peruse the entire menu here.
Posted by clairz at 3:49 PM 3 comments:

Best Layover Ever: The Blue Lagoon

I just came across a CNN Travel article, 14 Airport Amenities That Will Make You Long for a Layover. CNN lists airports that provide museum, music, golf and yoga experiences; and machines that pump out ice cream treats or downloadable movies to order. However, in my opinion, they missed the best and most amazing layover experience ever: The Blue Lagoon, located in a lava field in Grindavik, Iceland. You'll find it listed in the book, Unforgettable Things to Do Before You Die, by Steve Watkins. It is, indeed, one of the coolest and most unforgettable things I've ever done!

The airport and the tourist people in Iceland carefully coordinate bus rides from the airport in Keflavik; you have a short, 13 km. ride through a stark and stunningly different landscape to the geothermal spa; you are guaranteed a space on the bus to get back to your connecting flight on time. We left Paris early in the morning, and had plenty of time to play in the lagoon before continuing on to Boston later in the afternoon. The bus ride back to the airport from the lagoon was very silent, as we all had been soaking in nice hot mineral-laden water, and were too relaxed to even talk.

From the Wikipedia article on the lagoon:


The warm waters are rich in minerals like silica and sulphur and bathing in the Blue Lagoon is reputed to help some people suffering from skin diseases such as psoriasis.[1] The water temperature in the bathing and swimming area of the lagoon averages 37–39 °C (98–102 °F). The Blue Lagoon also operates a Research and Development facility to help find cures for other skin ailments using the mineral-rich water.


The lagoon is fed by the water output of the nearby geothermal power plant Svartsengi and is renewed every 2 days. Superheated water is vented from the ground near a lava flow and used to run turbines that generate electricity. After going through the turbines, the steam and hot water passes through a heat exchanger to provide heat for a municipal hot water heating system. Then the water is fed into the lagoon for recreational and medicinal users to bathe in.


You can see a live web-cam view of the lagoon: http://www.bluelagoon.com/Geothermal-spa/live-webcam/.

A million thanks to my son, Ben, for encouraging us to schedule the layover in Iceland, and for treating us to this amazing, life-changing experience.

A Philosopher in Paris 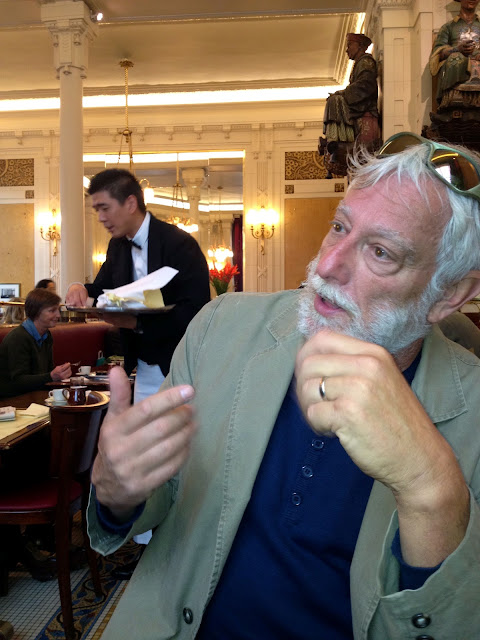 Our Beez is a lover of all things philosophical. Here he is in Paris at the famous Les Deux Magots cafe in the Saint-Germain-des-Prés neighborhood near our tiny little hotel. Les Deux Magots, now a tourist destination, was once the hangout for such intellectual and artistic luminaries as Simone de Beauvoir, Jean-Paul Sartre, Pablo Picasso, Albert Camus, and Ernest Hemingway.


Beez was doing a little philosophizing and pontificating himself over some lovely wine and an assiette de fromages. In the background you can see my second-favorite Parisian waiter, and the two Chinese figures that give the place its name.
Posted by clairz at 6:42 AM 9 comments: 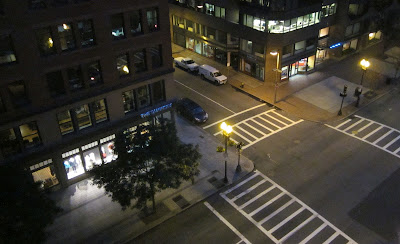 There's a moment of silence on Boylston Street that blows in through the window on the breeze from the Charles River. It arrives around 4AM, just after the last of the night time people has left for home in the last taxi. The traffic lights are blinking yellow and the streets are almost empty. 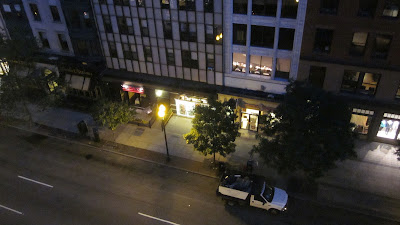 After a night of lively sounds, the silence wakes me up. I listen to the quiet, then the day starts to flow. First I hear the rubber thump of the early morning runners, then the homeless guy arrives and starts yelling about eggs again, and the trucks pull in with their beeping and clanking to deliver another load of fresh shellfish to the cafes across from the hotel.

Last night we ate ambrosial crab cakes and sweet oysters and drank California wines at the Atlantic Fish Co. We didn't order the Loire Valley wines because the price for a single glass was three times the price for an entire bottle in France. We laughed, and we thought about how really, really good we got at drinking that amazing local wine from the little Vival store in Monts-sur-Guesnes.

We laughed, and we thought about how cheaply we will be eating very soon, back on our patio under the shady trees, looking across the hot dusty valley up to our beloved cowboy mountains. It'll be pinto beans for us for a long time, after the big splurge of this once-in-a-lifetime vacation.

What We've Been Doing Lately

We are far from our southern New Mexico desert in every way. Under the cloudy and temperate skies of France, we are wandering through chateaux,

looking at gardens recreated in the 16th century manner,

seeing how people lived long ago,

and loving the old stone walls and wild poppies everywhere in the French countryside.


We are peeking into the remains of the moats around walled cities to see the gardens that people make,

going to markets where the French buy boxes of live chickens to keep them supplied with fresh meals until the market comes around again in a month,

and putting together our own beautiful table in the Poitou-Charentes.