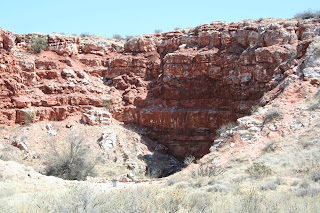 We drove down to see the Bottomless Lakes a couple of weeks ago. The name has always intrigued me and I wanted to see that part of southeastern New Mexico. Here is what I learned.

The chain of eight lakes is located in southeast New Mexico near Roswell (of UFO fame) and the Bitter Lakes National Wildlife Refuge. The area was set aside as New Mexico's first State Park in 1933.
The lakes aren't really bottomless. According to the official brochure handed out at the Visitor Center, they are "actually sinkholes that range from 17 to 90 feet deep. They were formed when circulating water dissolved salt and gypsum deposits to form subterranean caverns. Eventually, the roofs of the cavern collapsed from their own weight. Sinkholes resulted and soon filled with water and formed the existing lakes." 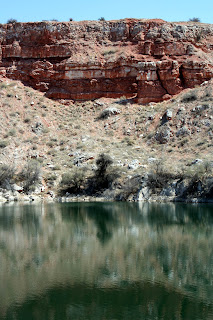 The Visitor Center was filled with interactive displays. I tested different types of water, compared the depth of the different lakes, and read a bit about the local flora and fauna. I learned there and from a wonderful New Mexico Bureau of Geology and Mineral Resources (NMBGMR) website that the lakes are actually cenotes, "small perennial lakes within deep, steep-walled sinkholes that extend below the water table." Unlike other lakes that have water flowing in and out via streams, their water supply comes from underground springs and their water loss is through evaporation.

I would encourage you to check out that NMBGMR website. It tells of legends associated with the lakes--I like the one about objects lost in the lakes turning up in Carlsbad Caverns over a hundred miles away--and it details the geology of the area, including information about "Pecos Diamonds." Here is one last quote from the site, this time about the animals found in the area: "Rare and endangered species are found in the park. The small Pecos pupfish and rainwater killifish live in the lakes. The eastern barking frog and the cricket frog, also endangered species, live in the park. Their croaking can be heard throughout the day. Other animals include deer, skunk, snakes, lizards, jackrabbits, and birds."

Lea Lake, the largest of the chain, is home to a recreational area that includes tent and RV camp sites, a bathhouse, a year-round swimming beach, and pedal boat rentals during the summer months.
There are bike trails throughout the park, and a 3-mile mountain bike trail above the lake area out on the plains. We plan to go back down for an adventure-filled Zee Camping Weekend soon. 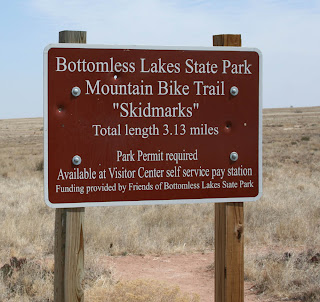 Posted by clairz at 8:17 AM No comments:

I'm a sap for little kids performing on a stage, so when my sister and I recently went to the spring musical about insects performed at the James Bickley School by the first and second grades, I was ready to enjoy myself. I laughed, I cried, I clapped, I giggled, and I even learned a little about "bugs." I got hugs from my students in the HOSTS program, where I mentor students learning to read. My sister agreed that it was a wonderful experience; she spent some time meeting and congratulating several of the performers after the show, and she honestly had a hard time believing that they were only in the first and second grades.

If you have a chance to attend a performance at a local school, don't miss out! You will see what the kids have been learning, and you will be amazed at the wonderful talents displayed by both students and teachers. I promise you, you'll come away feeling pretty good about our schools.
Posted by clairz at 7:46 PM No comments:

I am trying to toughen up. When I posted my very first video, My Clovis, on YouTube the negative comments got me down and I removed the video after a week or so. It had gotten 135 views, but it just didn't seem worth it to have to read harsh comments about the town every day from the same kind of bitter people who had posted the video Boycott Clovis, New Mexico.

I sent an email to the editor of the newspaper to ask why some people seemed so angry at Clovis, and if he thought there were any Clovis fans out there. And then the fun began. The editor, David Stevens, made my question his "question of the week" in the newspaper (scroll down to the Editors' Notebook on the March 28 edition) and on his blog, Falling with Style. You can see some of the great answers he received on the March 26 and March 27 posts.

This morning an op-ed piece by local media personality Grant McGee appeared on the editorial page of the Clovis News Journal print edition. You can read it online here. He talked about My Clovis and I scrambled to get the video back online. You can see it here and on YouTube at http://www.youtube.com/watch?v=bqX81erwpYQ.

Please feel free to comment here or on YouTube. I promise to try to be less tenderhearted this time.

Faces of the Fallen

Take some time to look into the faces of our fallen soldiers: http://projects.washingtonpost.com/fallen/
Posted by clairz at 8:24 AM No comments:

Ah, YouTube. When I saw a negative video posted there called Boycott Clovis, New Mexico I worked hard making a slide show of the photos that I have been taking since moving here. It took me quite a while to do because I have never put together a video using jpeg files before.

I thought that it might be a good idea to present a more positive view and to show the beauty that is here for those who look for it. I posted my little effort on YouTube, but soon found that I am far too tenderhearted to deal with the kind of negative comments that started appearing. Folks had apparently decided that they didn't like Clovis, and they resented any attempt to see it in a positive way. So I'm taking down my YouTube posting, and doing my best to obliterate my account there, which was under the name of "cloviscowgirl" because they already have enough clairz-type names on file.

P.S.: Things are looking up! See the March 28 posts on this blog.

The Vietnam Veterans Memorial Moving Wall has come to Clovis, prompting our local newspaper editor to send out this question to his mailing list: Do you have any Vietnam memories you'd like to share? At first I thought that I was still not ready to talk about those years or share those memories. I have never been able to watch movies about that war, and it's such a hard time to talk about. However, after some sleepless hours, this is the answer I sent. The editor of the Clovis News Journal, David Stevens, posted it on his blog on 3/17/08.

This is a hard, hard question, both for those who went to war and for those who stayed behind. I was up in the night thinking of what to say. This is not the story of the boy I knew who, having been trained to kill, came back from the war and murdered some people in a bar in Colorado. This is not the story of another young man I knew who left his family and his country forever because he did not want to kill anyone. And it is not about the boy who didn't come back at all, and who is named on the Memorial Wall. This is about yet another boy I knew during those war years.

One of my friends went away to the Vietnam War right after high school. I went away to college. We had known each other since junior high and had even "gone steady" back then. We dated each other occasionally during high school, but it was never serious. We wrote letters back and forth all the time he was gone away to war. His letters started becoming romantic, and he began to write about "our" love and future marriage. I was puzzled because this intensity was sudden and seemed to come from nowhere but, inexperienced as I was, I understood that he needed to make some kind of plan for a future that he could imagine while he was experiencing the unimaginable. Our correspondence continued as long as he was in the Army. His letters were passionate and all about the life we would have together when he got back. Mine were matter of fact and about the daily details of life at home.

After his discharge he came home tense and exhausted in a way that was beyond my experience. We went for a long drive with another couple. We were in the back seat; it was warm and he nodded off. I watched him sleep and was thinking how good it was for him to get some rest, when a passing car backfired and he woke and went into a crouch, groping frantically for an imaginary weapon. I pressed against the opposite door, horrified by his fierce reaction and suddenly understanding more about his war in that moment than I had ever understood before. I was brokenhearted for the lost boy I had known.

His job during the war was being a gunner on a helicopter. When I asked him how he could do it, he said that you had to teach yourself to see the fleeing people as targets. Just targets.
Posted by clairz at 8:26 AM No comments:

Create an Ad for Obama

MoveOn.org is running an ad contest, "Obama in 30 Seconds." It's a chance to use your creativity to help the Obama campaign. See the details and some sample video ads from the past here. And pass it on to everyone you know. Yes, we can!
Posted by clairz at 8:25 AM No comments:

Down Here in "Mexico" 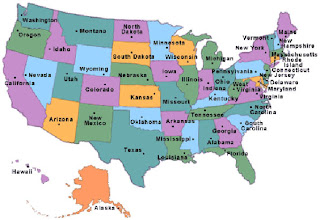 My sister is moving here from Portland, Maine and is in her little car with her cats right at this moment, driving across Arkansas. She has had a good trip so far, managing to get out ahead of yet another big snowstorm in the northeast, and hopefully arriving here before a low pressure system sweeps some possible tornadoes through the southern states later today.

Jean made me laugh until I cried, describing a waitress in Virginia who, upon hearing her destination (which J tried to clarify, to no avail), called everyone over to Jean's table. Adjust your ear for a southern accent, delivered in a slightly shrieky voice: "Y'all, come over here! She's moving herself to Mexico! Honey, why're you going to Mexico?" People crowded around, offering advice. One man said he'd been to Mexico, on the same trip when he went to Las Vegas, and they had a blizzard and the desert, all in one trip! More advice: "Now y'all bundle up, honey, the temp is going to dip down to 55 tonight! Hope it's warmer than that in Mexico!"

See One of Our Fifty is Missing from New Mexico Magazine for more of these New Mexico/Mexico mixups. People here often have a hard time convincing folks that we still live in the U.S. When we last checked, we were located right here between the states of Texas and Arizona.
Posted by clairz at 5:55 AM 2 comments: