Adobe Homes: Where Can You Find Them? 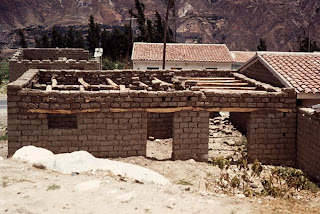 One half of the world's population, approximately 3 billion people on six continents, lives or works in buildings constructed of earth. The techniques for this kind of construction may include rammed earth, mud brick or adobe, compressed earth, and cob (a building material that is similar to adobe, and which consists of clay, earth, sand, straw, and water). 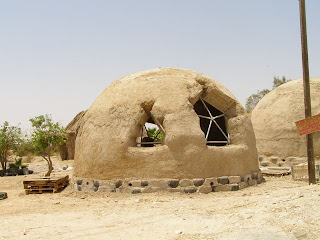 Remains of an old adobe wall and part of a reconstructed one at Pecos National Historical Park, New Mexico (my photo) 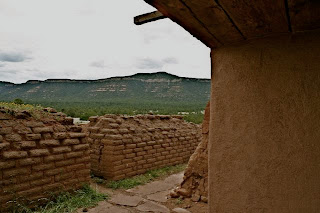 I've always enjoyed the ruins we look at while in Arizona ... Grand Canyon area or in Utah ... Bryce area. Capital Reef area had some too.

I don't think they would work in mine ... too much rain.

The red lettering on the blue background made today's post un-read-able. Back to the white type, please!

South Valley Girl, I discovered the problem after the post was published. I'm having a problem with the new background--some days the font is ok, and other days it is published that weird way. Thanks for letting me know, as I'm trying to head off the problem.

If you see it that way before I catch it, you can always press Control + A to highlight the text so you read it.

Interesting stuff. Were you or your husband in the service? How long did you live in Las Cruces? That is one place we are looking at, too.

FourWinds: No, we are not in the military, just compulsive gypsies. I believe we are ready to settle down at last, though. I can't wait to start taking photos and posting from Las Cruces. In the meantime, if you would like to take a look at some great photos of the area, see http://www.city-data.com/forum/las-cruces/367104-sticky-me-las-cruces-nm-pictures.html.

If you have any specific questions about Las Cruces, just let me know. I'd love to research and write posts in response to your interests.

P.S. We lived in L.C. for just one year in the late 1990s before family business took us back to New Hampshire. Starting next Tuesday, we'll be living there again!