Desert Dwellers in Search of Water


We're enjoying a pretty good monsoon season this year. In some places in New Mexico, we hear that the clouds pile up every afternoon and the rain comes down, just like clockwork. We aren't always so lucky here in the Mesilla Valley--the clouds often seem to slide on by (a friend calls it the teflon effect) to drop their moisture somewhere else. However, we've managed to get 5.67 " of rain so far this year, spread out over 37 rain days. Not a lot, but more than we've received in some years. Keep reading to find out about a place just up the road (in New Mexico terms) that has almost too much water at times.

Sidebar: I just finished reading The Camel Bookmobile by Masha Hamilton. The protagonist, an American librarian called Fi, has taken on a project to deliver books by camel to the farthest reaches of the Kenyan desert, spreading literacy to wandering peoples who might never have held a book before. After spending some time in a place where every drop of water is precious, Fi finds herself dreaming about water in all its lovely forms, and especially the ways she is used to lavishing it on herself back home in America--luxurious shampoos, deep baths, big drinks of icy water, and so on. I wish I could share the exact quote about her water dream with you, but the book is already back at the library. (I hope you get a chance to read it, as it is a good story that also raises questions about foreign aid and bringing "progress" to traditional peoples).

Back to the idea of water here in New Mexico. As a former New Englander living in the desert southwest, the smallest (and briefest) puddle will stop me short, and I long for the sight of a flowing stream.  Fi's dream is one that I might have had. Lovely, cool, flowing water...

And so, as a Labor Day gift to ourselves, we set off in search of water. In only three hours by car, we found it up in Catron County, near a little town called Glenwood, on the Catwalk Trail along Whitewater Creek in the Gila National Forest. 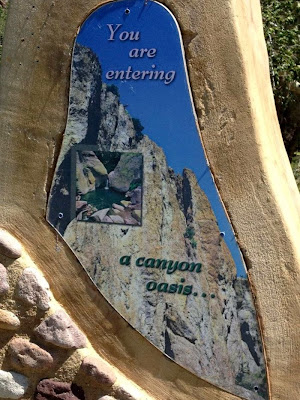 Here's where that monsoon rainfall comes in. The Catwalk Trail area is open only from 8AM to 1PM during the monsoons, because it is one of the places where the rain comes down in serious amounts in the afternoons. Because the trail goes up a box canyon, any rain at all can bring dangerous flash flooding and debris flows. The roads into the area can become impassable and downright dangerous. 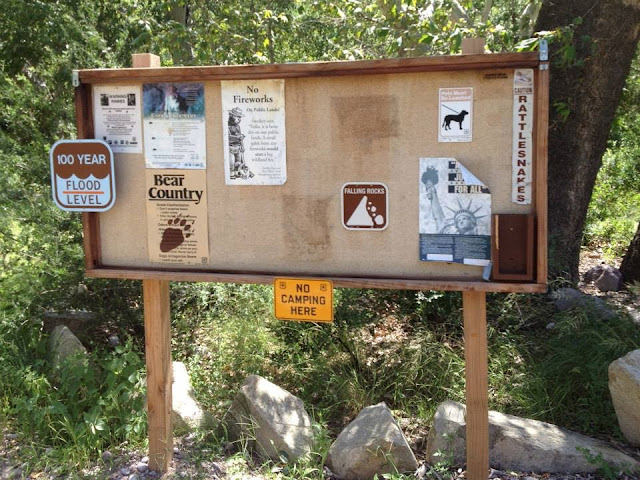 Speaking of dangers, we got a kick (sort of) out of this signboard at the entrance to the trail, which warned happy hikers of the possible troubles ahead. From the left, we were told that we might encounter flooding, rabid foxes, cougars, bears, dry conditions (no open fires or fireworks, please), falling rocks, more bears becoming angry due to the presence of dogs, and rattlesnakes. To round out the list, there was also a sign showing the Statue of Liberty and promising justice for all (which seemed somehow threatening under the circumstances). 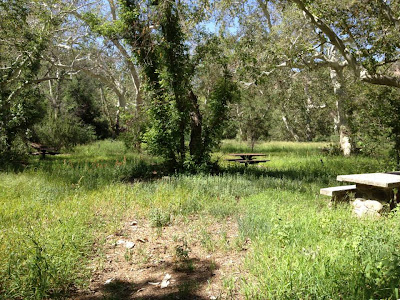 In spite of the warnings, the picnic area looked rather inviting. There were some immense shade trees that we thought might be sycamores. 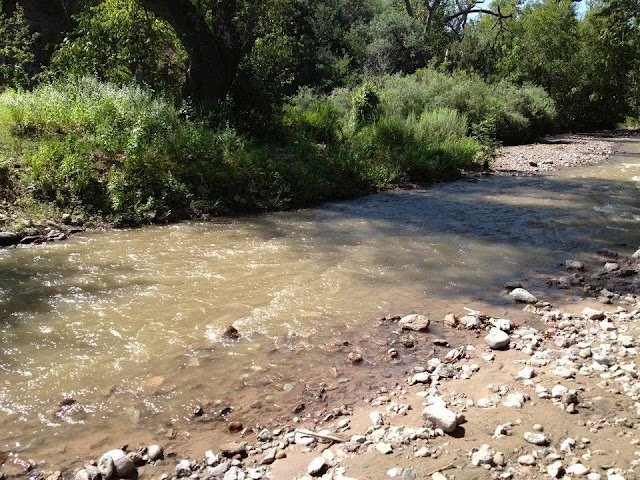 And here it was: Lovely flowing water at last! The creek was deceptively deep in the middle, flowing fast, and it was very, very cold. 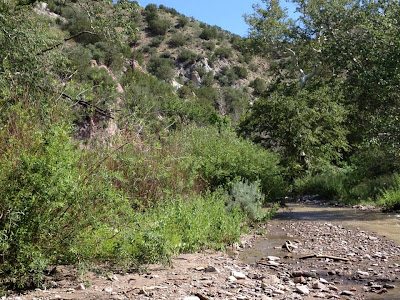 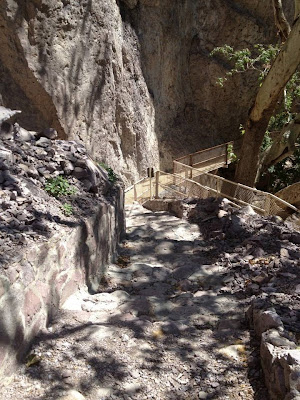 Further up the trail were the catwalks, which apparently were first put in during the late 1800s for workers who maintained a water pipe leading to an old mill at the mouth of the canyon. The walkways were eventually improved and strengthened, and became the Catwalk Trail we see today.

Every once in a while, as we moved up the trail, there were more signs reminding us to watch for rattlesnakes. By the way, have you ever seen a rattlesnake in the wild? They are usually very difficult to spot, as they blend in to their surroundings so well--good thing they have that rattle to warn us when we get too close. I'm speaking theoretically now, as we didn't actually see any snakes (or cougars, rabid foxes, or bears) during our walk, though I'm sure they were out there. 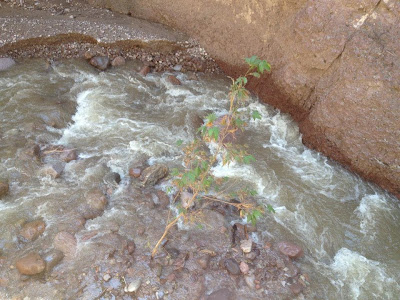 The day in the Gila wasn't terrifically hot, as New Mexican summer days go--only in the high 80s. However, because of the high altitude (something like 5800 feet), it felt blazing in the sunshine and quite cool in the shade. 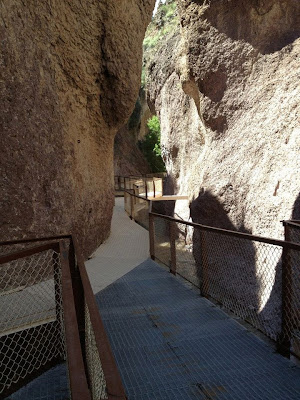 The ranger came through to remind the trail visitors to leave the area by 1PM. Indeed, on the way out, the road was under flowing water in two places (see the photo at the top of this post). We carefully forded the streams, and continued on our way, happy to have seen and heard and experienced some beautiful flowing water. Back home, it was another record-breaking high temperature day (97 F.) with lots of beautiful storm clouds sliding by to drop their moisture somewhere else in the land of rabid foxes and bears.

Thank you, Beez, for taking the photos for this post, since I left my camera in the car.

What a lovely place and a great getaway!! Love the photos and background of the area! Thanks for sharing, Clair! Looks like such a fun day. Hope your week is going well and I'm glad you didn't run into any rattlesnakes!!

We here in Taos County (and Taos in particular) have been getting really nice rains this season. We received a real "gusher" yesterday (Labor Day). Green grass is peeking up everywhere! Loved the pix and info on the Catwalks---I'll plan to visit it soon.

I want to go there! It looks like a different state - in more ways than one. Beautiful water......

I love your photos. That picnic area does look so inviting. I'm going to keep an eye out for the book you mention and add it to my "want to read" list. I'm interested in water issues and aid, and Kenya.

This is really interesting Clair. The creek (your reward after the hike) is beautiful and wow, ...you definitely want to be out of that canyon on time. The signboard's kind of funny with all those warnings, but anyone walking the trail sure better pay attention.

We learned growing up in Eastern Washington desert country to not rest on or against boulders or ledges before checking very carefully for rattle snakes. They love warm stone.

You are a great story teller! I was with you all the way aand had to smile at the intrepid hikers' adventures.

I've been meaning to read that book. I just heard on the radio that aquifers have been found in Kenya. It will change everything, I expect.
http://www.bbc.co.uk/news/science-environment-24049800