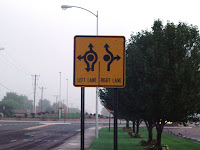 The City of Clovis has a roundabout not far from my house, at the intersection of Norris and Llano Estacado. Its construction was begun in November 2005 and completed in February 2006, when the community of the nearby Faith Christian Church provided landscaping for it. You can see photos the construction and the completed project at http://www.cityofclovis.org/roundabout/roundabout.htm.

I was curious about the history of these traffic control features, so I found out that roundabouts, also called traffic circles or rotaries, have been built to help traffic flow since the construction of the Columbus Circle in New York City in 1905. At first the circles led to traffic lockups, crashes, and increased congestion. In 1966, the United Kingdom began requiring incoming traffic to yield to traffic already in the circle, so that traffic flow improved and there were fewer and less severe accidents. Other countries adopted this approach and the circles became more popular. For a U.S. Federal Highway Administration information guide on roundabouts, which includes historical information, see http://www.tfhrc.gov/safety/00068.htm. To read a more simplified version of the history see the Maryland Dept. of Transportation page at http://www.sha.state.md.us/safety/oots/roundabouts/history.asp. For a slightly nerve-wracking (to me) animated clip showing how a roundabout works, see their roundabout home page at http://www.sha.state.md.us/safety/oots/roundabouts/index.asp.

I always approach the roundabout with a bit of trepidation, especially when there is other traffic around—of course, that’s a situation easily avoided in low-stress Clovis. I’m sure that I’ll get more used to the process with experience, but I always mutter my way through—“right lane for immediate right turns at 3 o’clock or 12 o’clock, left lane for eventual right turns at 9 o’clock or 6 o’clock.” At least I don’t do as poorly as this fellow, whose single-minded approach was captured on video by a web cam mounted on the steeple of the Faith Christian Church: http://www.youtube.com/watch?v=Jesf4xFOg1Q. The story goes that he lost his brakes and panicked. That little brick wall around the center landscaping is 2-3 feet tall.
Posted by clairz at 11:46 AM