Take a look at these two photos, taken with my old non-digital camera, which captured colors in a wonderf

ul way. The wall with the blue door is in Mesilla, Las Cruces' "old town," and the other picture is of my sister's apartment in Berkeley. These colors make me feel so happy, it's no wonder I decided it was time for the beige living room walls to go.

My intention was to paint them a beautiful canteloupe color, so here is the paint I got:

It's so hard to show true color on the computer, but the shade looked like orange sherbet (canteloupe sounds healthier). Here is what it looks like in the living room. I'll show you the "before" beige and the "after" colorwash. 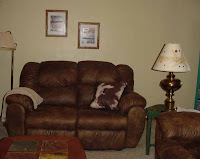 Much cheerier, don't you think? If you could see the colorwash up cl 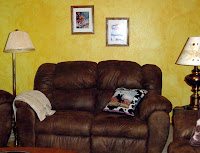 ose, you'd think that I used two or three colors of paint to obtain a layered effect. Actually, I thinned the paint down with water, about half and half, and sponged it on sparingly with a natural sponge, which had been cut to a comfortable size to handle with a sharp knife. The straight edge of the cut came in handy when painting around windows and molding and up where the wall meets the ceiling. Because the wall has some texture to it, the end result is a mottled effect that I really like. However, the walls turned out to be several tones of gold, instead of the intended canteloupe. It was amazing, I loaded canteloupe color onto the sponge and it turned gold on application because of the underlying beige layer.

The room is now a warm and lovely looking color, and it only took seven tablespoons of paint!
Posted by clairz at 3:32 PM