Sleeping with the Stars (sort of) 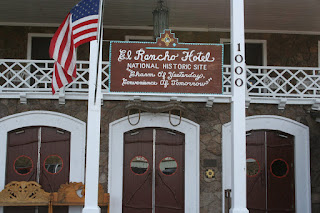 We stopped at the famous El Rancho Hotel for lunch when we passed Gallup through recently. The hotel was built in 1937 by the brother of movie magnate, D.W. Griffith. Listed on the National Register of Historic Places and protected by the National Historic Preservation Society, it is now owned by the family of the respected Indian trader, Armand Ortega.

The Hotel is located on the old Route 66. When I stepped through the door, I was reminded of some other fine old lodges in other parts of the country, built sometimes as public works projects and often during the Great Depression. The ambiance was similar, although on a smaller scale, to that of the Timberline Lodge in Oregon, Old Faithful Lodge in Yellowstone , and the Quinault Lodge on Washington state’s Olympic Peninsula. The El Rancho lobby was built with polished brick floors, massive ceiling beams, and a stone fireplace that is flanked by two handmade wooden staircases that lead to the second floor gallery. It’s furnished in that kitschy and beloved rustic Old West style. There are Navajo rugs, and mounted animal trophy heads, and longhorn cowboy furniture everywhere you look.

Because of all the movies that have been filmed in the area, a great many movie stars have stayed at the hotel and there are great old black and white autographed photos hanging on the walls of the upstairs gallery. You’ll see pictures of Burt Lancaster, Paulette Goddard, William Bendix, Jane Wyman, John Wayne, and lots more. The rooms are named for them; as are the New Mexican and American style dishes available in the restaurant, where a friendly and attentive staff welcomed us in.

Next time we go to Gallup, we plan to stay at this historic and picturesque Hotel. The Ronald Reagan Room sleeps six, and is a bargain at $128, considering the wonderful ambiance, décor, and sense of tradition. Where else in New Mexico can you sleep where the stars have slept?

Well, that would have been a nice line for an ending, but I’m sure you can think of other New Mexico places where the stars have slept—Santa Fe's Silver Saddle Motel and La Fonda are a couple that I know about. So here is today’s challenge—what other hotels do you know of in New Mexico that have a star-studded past? Please leave a comment, you know I love them!
Posted by clairz at 8:08 AM

Ah...the days when Ronald Reagan was a movie star...