Up the little trail, cave in the distance 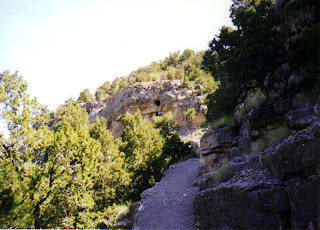 I came across this phrase in a book--a palpable silence--that stopped me right there on the page. There it was, the perfect way to describe what I feel sometimes, in some places, here in New Mexico.
On our very first trip out from New Hampshire to take a look around New Mexico with the idea of living here, we drove up into the Sandia Mountains outside of Albuquerque. About four miles up from Placitas, we saw a smallish sign saying "Sandia Cave" and took the turn, curious about what lay ahead. We parked in a little lot off the side of the road and walked the half mile trail. It ended in a concrete staircase in Las Huertas Canyon, which led straight up the side of a limestone cliff. At the top, we stepped out of the hot sunshine into the darkness of a cave. All around us was nothing but silence--no crowds, no inconsequential tourist chat--just a silence so deep that it was a separate presence. A palpable silence. 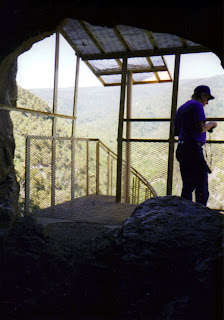 Out of the hot sunshine into the darkness
I was surprised to learn that this deserted and out of the way place, which came to our attention with so little fanfare, was the site of the celebrated Sandia Man. Why, even I remembered reading about him in some textbook or other. This was a famous guy! Here is a quote from the Albuquerque Journal: "Sandia Cave, discovered by an anthropology graduate student in 1936, was excavated by University of New Mexico archeological teams between 1937 and 1941. It contained skeletal remains of such Ice Age beasts as the wooly mammoth and mastodon and giant sloth, as well as stone lance and arrow points, basket scraps and remnants of woven yucca moccasins. The diggers found no human bones in the cave debris. At first, it was thought that Sandia Man may have used the cave as a seasonal retreat about 22,000 years ago. But more recent dating shows that Sandia Man actually lived periodically in the cave only 10,000 to 12,000 years ago. Even that revised age-estimate would make Sandia Man one of the first recorded inhabitants of North America, hunting game in the Sandias during the same era as Folsom Man roamed the plains of Northeastern New Mexico. " 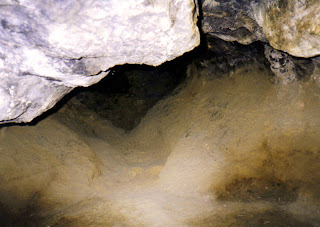 Looking into the cave
This was our first experience with the big silences of New Mexico. I'll write about more of them in the coming days.
Posted by clairz at 6:35 AM

does new mexico have vortexes like arizona purports? i say purport because i didn't get to investigate any while I was there...though I really wanted to. palpable silences would seem to go hand in hand with a vortex...

Erikka, I had to look up "vortex" and found that it is a "swirling center of healing energy" and that Sedona is thought to have several, perhaps. I can't find any scientific writing on the subject and also do not find any info about vortexes in New Mexico. I can only speak, therefore, from personal experience.

This place can be spooky! There is a reason that it is called the Land of Enchantment. Certain places, which will be coming up in the Palpable Silence series, have a strangeness about them. Maybe it is due to the long history of people in those places; maybe it is because of conflict that took place in the past, I don't know. I'm going to do some investigating to see what other people have experienced and will report back.

Sandia Cave is going on my list of "must do's". I am going to have to have to do some serious reading on the history of the state.

Yes! My boyfriend and I were in AZ and we stopped in Sedona. I so wanted to visit a vortex, but we didn't have time. :( I just see there being the possibility for them in New Mexico, due to the similar environment, histories, and peoples. If you read too much of the written stuff on vortexes, it gets a bit too...new agey, but I think the way you describe these palpably silent places is what is at the heart of a vortex - a place that feels full and sacred and a little scary. I'm sure Sedona wants to be the only place to claim vortexes, but I personally think they could be...almost anywhere. Say, the redwood forest for one place.