I found this photo of the Stillmeadow house in Google Images 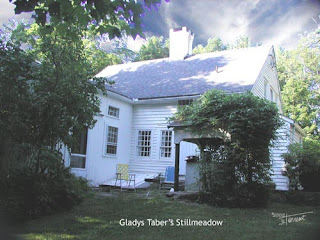 I came across my first Stillmeadow book by Gladys Taber while we still lived in Washington state. I read how Gladys and her friend Jill wandered the back roads of Connecticut weekend after weekend, looking for a country place where they could raise their children and dogs. I often thought of how they waded through knee-deep snow up the driveway of the ancient house that was to become their Stillmeadow, little realizing that years later our family would slide across an icy driveway to find our own bit of history in our own antique colonial house. I remembered Gladys' description of the old wavy glass in the small-paned windows of her late 1600s house, especially when I looked through our own wavy glass in our late 1700s home. Gladys' house, when she found it, had wide pine floors patched with flattened tobacco tins; our house came to us with graffiti-laden walls.

When we first moved to New England from Washington, we headed for the local library--Beez to find some fiction while I took a look at the books by Gladys Taber. He found me there, sitting in an armchair and gulping back sobs, holding the latest Stillmeadow book. It had an introductory note by Gladys' daughter, explaining that her mother had passed away just before the book was scheduled for publication. When he understood that my friend Gladys had died, he took me home and gave me a cup of hot tea. I felt like I had lost a member of my family.
Over the years I collected as many Stillmeadow books as I could find in used book stores. Now, with the Internet, I would be able to put together a similar collection in an afternoon and have the books delivered to my door. For some reason, when we packed to move from New Hampshire to New Mexico, I gave away all those books to lighten our load. I'm sorry not to have them now.
Here is a list of books by Gladys Taber, including the books about Stillmeadow. I found the list on this website. (Note: Sorry, that website is no longer there as of 4/14/10).
Lady of the Moon (1928)
Lyonnesse (1929)
Late Climbs the Sun (1934)
Tomorrow May Be Fair (1935)
The Evergreen Tree (1937)
Long Tails and Short (1938)
A Star to Steer By (1938)
This is for Always (1938)
Harvest at Stillmeadow (1940) -The First Stillmeadow Book
Nurse in Blue (1943)
The Heart has April Too (1944)
Give Us This Day (1944)
Give Me the Stars (1945)
Especially Spaniels (1945) New Edition (1949)
The Family on Maple Street (1946)
Daisy and Dobbin:Two Little Seahorses (1948)
Flower Arranging for the American Home (1947) New Edition (1948)
Stillmeadow Kitchen (1947) New Edition (1951)
The Book of Stillmeadow (1948)
Especially Father (1949)
The First Book of Dogs (1949)
The First Book of Cats (1950)
Stillmeadow Seasons (1950)
When Dogs Meet People (1952)
Stillmeadow and Sugarbridge (1953) with Barbara Webster
Stillmeadow Daybook (1955)
Mrs. Daffodil (1957)
What Cooks at Stillmeadow, the Favorite Recipes of Gladys Taber (1958)
Spring Harvest (1959)
Stillmeadow Sampler (1959)
The Stillmeadow Road (1962)
Another Path (1963)
Gladys Taber's Stillmeadow Cookbook (1965)
Flower Arranging (1965)
One Dozen and One (1966)
Stillmeadow Calendar (1967)
Especially Dogs...Especially at Stillmeadow (1968)
Stillmeadow Album (1969)
Amber: A Very Personal Cat (1970)
My Own Cape Cod (1971)
My Own Cookbook: From Stillmeadow and Cape Cod (1972)
Country Chronicle (1974)
The Best Of Stillmeadow (1976)
Harvest of Yesterdays (1976)
Conversations with Amber (1978)
Still Cove Journal (1981)
Reveries at Stillmeadow
Posted by clairz at 7:41 AM

I loved her books and thought I read them all when my kids were little. For me it was about the rural life and the garden more than the house. Looking at the lengthy list of what she wrote, I know I didn't read them all by a long shot but she was an author who I loved to find something new in the library and read what I could get my hands on. It was a lifestyle that seemed so idyllic in a lot of ways but it never really is what the books portray probably.

My Lord! she was prolific, wasn't she! I'll have to check and see if I can find one around here. I haven't read her before and always enjoy finding a new author -- well, new to me. Thanks for a lovely post as always.

i have not heard of this author. thanks for sharing someone so dear to your heart Clair. which would you recommend first?

and ps. did you get my link to the Nicaragua blog?

Personally, I would go for any of the Stillmeadow books. Some of the titles on this list are children's books, and some of the novels are pretty dated, but I love the ones about Stillmeadow.

Of course, I'm something like 40 years older than you, Erikka, so our tastes might differ just a little bit...

I started reading Glady's column Butternut Wisdom when I was living in the Bay Area of San Francisco and missing a "bit of country." She gave me a little dose each month as I longed to return to Oregon. It was years later that I discovered she had written books. I collected all I could and enjoy them still, reading them by the seasons. I love Fall the best with the hustle of getting the garden cleared, the canning done and preparing for the storms. We have a little cabin in the woods of Washington now and I plan to plant a moon garden like the one Jill planted for Gladys of all white flowers with an old wicker chair to sit in and ponder my blessings just like Gladys.

Yacker, 30 years have passed since I read my first "Gladys" book, and I still have my list of flowers that one would put into a moon garden. I just haven't quite gotten around to planting them all.

Thank you for mentioning the moon garden. It's wonderful to come across someone else who thinks about it.

I hope that you'll stop by my website...it's a tribute to Gladys Taber and her beloved Stillmeadow.

It's always wonderful to find someone else who loves Gladys. Stillmeadow is still there and still as lovely as ever.

If you can find her books it it so worth it. I have enjoyed them so much, I've read them all. Also look up Hal Borland. You will enjoy his books, and he was a friend of gladys'. Both great naturalists.

I would like to hear comments about Hal, if you have read him?

How did I miss this, Clair?! I've been looking around the internet this morning for info on Gladys T. and your blog entry came up! So many of the old sites about her are gone (one because, so sadly, the woman who ran it died), and I'm still looking to see if there are new ones. Lovely posting, and I'm so glad to have a list of books. I think it is time I buy them. I own only Stillmeadow Sampler. Are you a member of the Friends of GT? Have I asked you that before? :<)

Thank you all for leaving comments on this post. Nan, I went through both of my Gladys posts, and added notes on the links that don't work any more. My, I wish I still had my collection of Gladys' books!

Greeting from the Evergreen state, anyone know about who lives in Gladys' house now?

I know that Gladys had a granddaughter named Anne Colby, who spoke to the media in 2005 when Still Cove was up for sale. But I don't know who has Stillmeadow. The person who designed the website was a neighbor, a young teen at the time, and doesn't know either.

I have loved Gladys Taber for years - I am also a transplanted New Englander and keep her books to remind me of my early home. I live in TN now and have grandchildren whom I have taught to love Gladys Taber as much as I do! I have 2 grandaughters (12 and 14) who love to read and when I loaned them the book of short stories, they fell in love with her writing style and all her animals. When they returned the book, they asked if I had any others and they were off and running. Nice to know her writing stands the test of time!