Going East on the Union Pacific 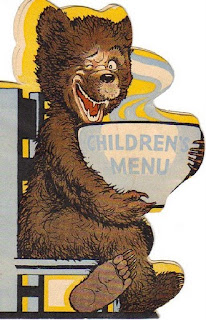 I was born in Maine. When I was just three months old, my adventurous parents put my bassinet between them on the front seat of the car and headed west to a promised postwar job in the shipyard at San Francisco. Three and a half years later, in 1948, my mother took me on a train trip back to Maine to visit the relatives. Many years later, when I had a three-year old of my own, I took him on a train trip from Washington state to northern California, a total of 18 hours. We had lots of fun, but I can only admire my own mother's fortitude in taking me on a multi-day train trip across the entire country.


All I can remember about my train trip with my mother was the new brown and pink plaid dress she had sewn for me to wear. It had a little "built-in" pink apron, and my mom and I decided that the apron would be perfect for gathering eggs when we got to Uncle Murray's farm.
Reality was quite different from my imaginings. Yes, I wore that little dress out to the hen house but, as a shy and urban child, I could not make my peace with those fierce hens. I do remember feeling extremely offended when Uncle Murray offered me some fresh milk out in the barn. I agreed that a serving of milk would be a good thing, but was shocked when he delivered it by aiming at me with the cow's teat. It was a little too fresh for my citified taste!
Luckily for me, my mother saved the children's menus from the train trip. A little research on the Internet has helped me to piece together a few facts. Two of my menus are marked with the date and I found the same menus on eBay, so now I know that we traveled part of the way on the Union Pacific Railroad. From what I can tell by looking at old railroad route maps, I am assuming that we went to Omaha, and then to Chicago, and then on to New England.
Here are the breakfast, luncheon, and dinner menus for the well-traveled child in the postwar United States. They are an interesting glimpse into our past. 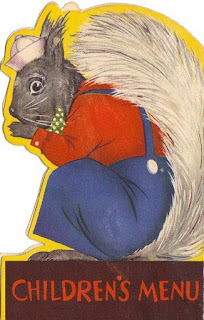 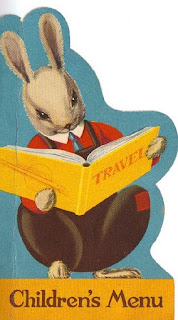 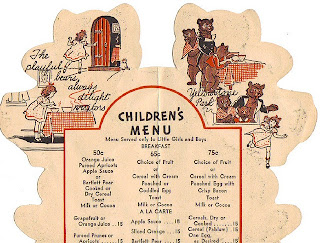 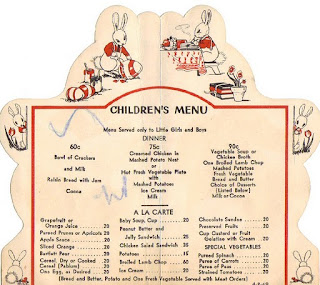 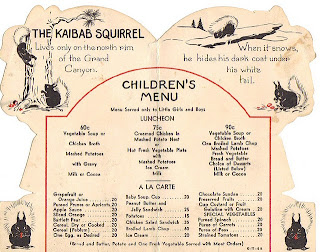 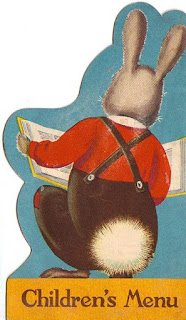 I have been interested in train menus for a long time - but have resisted collecting them. These are stunning! Thanks for sharing your story, beautiful!