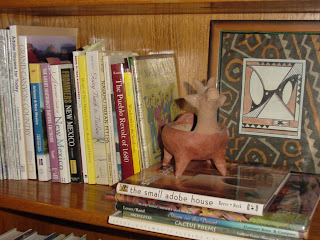 I am borrowing this idea from Nan of Letters from a Hill Farm, a blog you will love. I am going to keep track of all the books I read and will add to this page from time to time.
I have written on this blog about the books that are underlined; just click to see the post. To read reviews by other people of all the books and to see everything I've read in the past few years, plus a list of what I plan to read, see my Shelfari Bookshelf. You and I just might have the same taste in books. Who knows?
Forgive me for not capitalizing every word in the book titles; that's just the way librarians are trained to do it and I can't seem to break the habit.
Agee: River wife

Two of the books from the list I could read are Hooseni's "Kite Runner" and Friedman's "The World is Flat".

I read Friedman's book only recently amidst the ambiance of despondency set in by the recession. Friedman seems to be sanguine giving an impression that everything would fall in place because the world has flattened and whatever has not been so, they will in due course. Time vindicated otherwise.

Otherwise the book is a page-turner. A general purpose book has been presented with the readability of a fiction. It is highly informative, cogently argued and it leaves impact on the readers.

I've reviewed the book on my blog. You may have a look.

hey clair. have you thought of using Goodreads.com or Shelfari to do this? That way they track it for you and show the book covers, and you can add a review if you'd like too.

Erikka, I do use Shelfari faithfully. My lists are always updated there. You can see my Shelfari shelf of books I am currently reading on the left side of this page if you scroll way down.

I just wanted to keep an easily accessible list on the blog.

Hi Clair,
I read "Gilbert: Eat, pray, love" and since it was a good book that I had bought on eBay, I gave it to someone else who loves to read. For most of the past year, I have read at least one book a night ~~ always nonfiction with some exceptions. I read alot of memoirs and some travel books. I liked the excerpt that you included in your blog; that was a sweet albeit sad story. Nonetheless, very easy to visualize. Northanna_2001@yahoo.com (Suzanne)