If there were Terrible Twos around, he couldn’t see them. Later that night, wearing his pajamas with teddy bears, after his light was out, he peeked out from under the covers to see if the Terrible Twos were out there. They sounded scary. They weren’t anywhere around, and he was quite certain his mother had been wrong. But he put his pillow over his head, just in case.

~Lois Lowry: All About Sam

Lately, our little Bertie Pierre has been experiencing the Terrible Twos. Now, I know this must be confusing for you, as I was just recently telling you about Bertie's adolescent behavior, and now we're back to the Terrible Twos. What can I say? Life with a small chihuahua boy runs the gamut of emotions as we swing madly from one developmental stage to another, and then back again.

Bertie shows his emotional immaturity just as a two year old does--He says NO. Sometimes he says NO NO NO, in no uncertain terms. He does this by running as far from the authority figure as he can get, rolling over on his back, and covering his eyes. He figures if he can't see you, you will just go away. Let me show you what I mean...

Bertie, it's time to go outside for a little bathroom break! 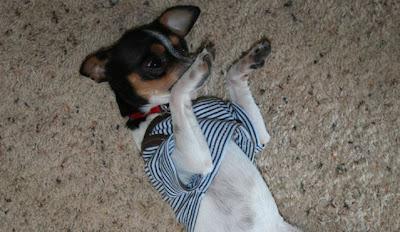 Bertie, do you know who might have unrolled the toilet paper and dragged it all over the living room? 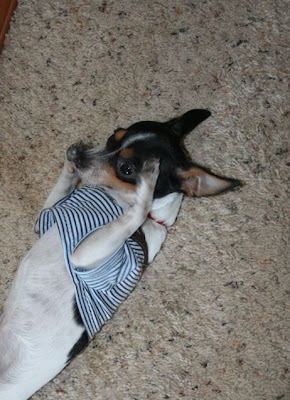 Bertie, have you and Gracie been playing Knitting Lessons again with my yarn? 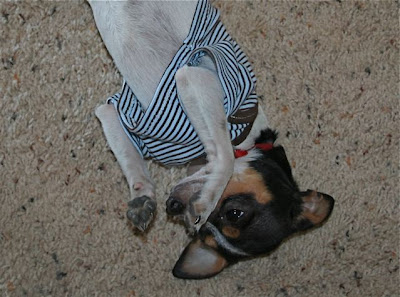 Bertie, would you know anything about this little wet spot on the carpet? 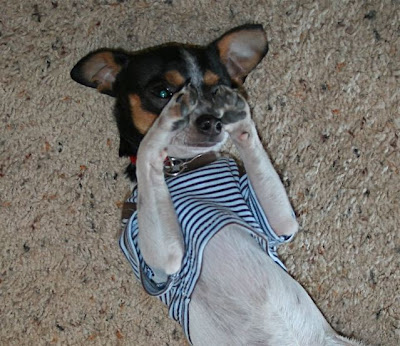 Bertie says NO NO NO!

Be sure to see the Complete Adventures of Bertie Pierre

Bertie sure is a cutie in his little striped shirt. Guess the terrible twos are the same for children and animals. My two year old grandson acts just like Bertie!

Bertie looks just like me in the middle of the night when my dogs decide it's time to wake up, rearrange the comforter and play hide and seek. No no no! Why now? Go to sleep!

Of course they could probably engage in their nocturnal shenanigans without incurring my wrath if they were tiny and cute and fashionable like Bertie.

Judy, it's ever so much more acceptable to take photos of a grandchild wearing clothes. I don't know what has happened to me. I wasn't like this before I lived here.

Buck, it's becoming obvious to me, and to everyone else, that we really need to get out more.

Having lived through two teenagers(who were actually mostly fun to live with), I'd say that the Terrible Twos and the teenage years have many similarities.

I really love your Bertie shots. They always make me laugh out loud. A big personality in a little body!