Pecans forming; this photo was taken a couple of weeks before the big storm 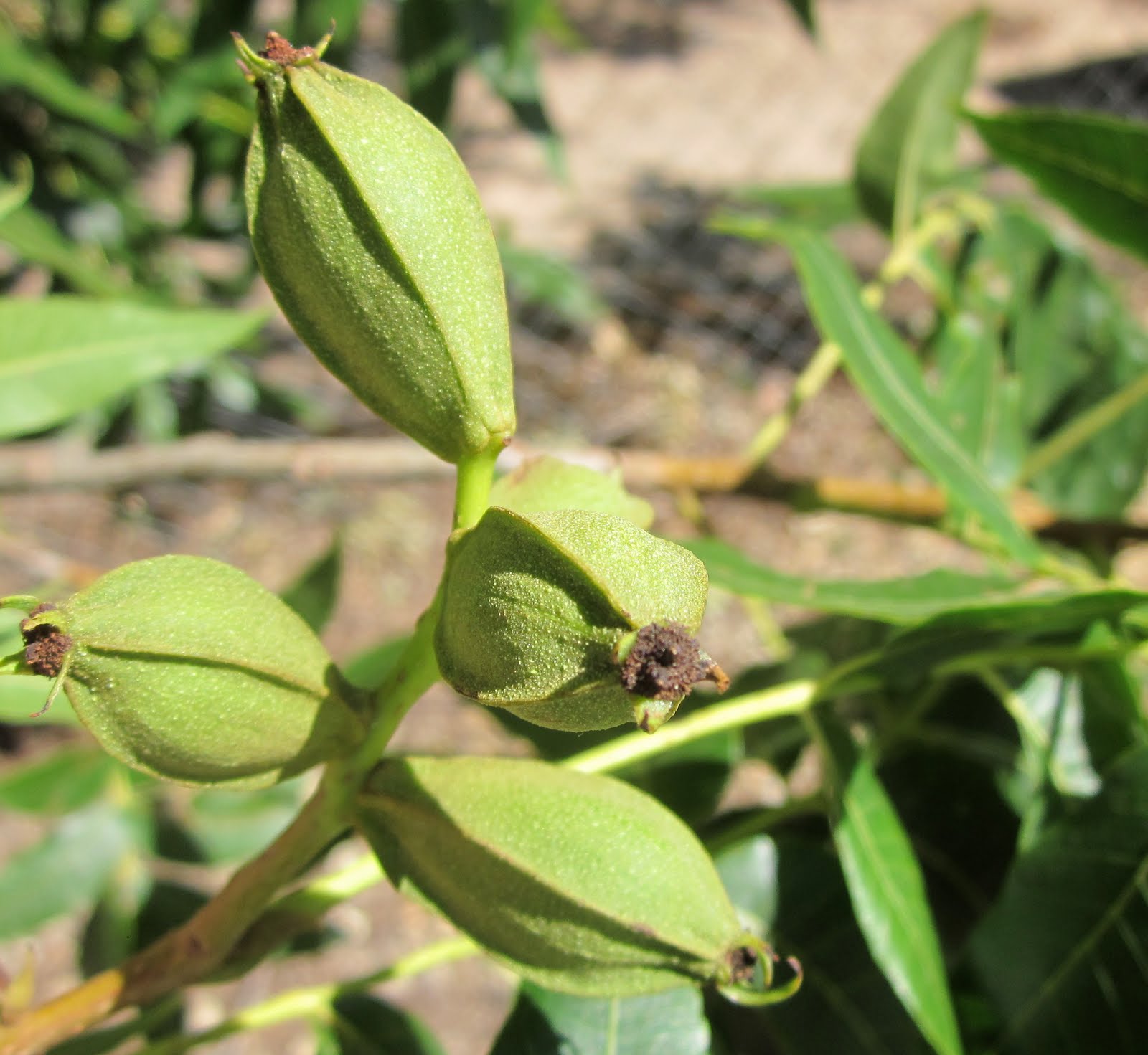 I finally got to meet the owner of the pecan orchards that surround us. He stopped by right after the big storm that caused so much damage. I was sitting in the driveway with a cell phone and the telephone book, shakily trying to remember how to look up the phone number for my insurance agent without the Internet. The power was still off at that point.

He was pretty worried about hail damage to his crop and wanted to know how big the hail was and how long it lasted. I could only see the tiniest branch down on his side of the fence, but he told me later that the hail knocked a lot of the little green pecans right off the branches, considerably thinning his crop.

While I'm talking about damage here, I can announce that yesterday we finally got gas to the house, three weeks and one day after the meter was broken off by the falling tree. I have spent some chilly mornings in the cold shower and have eaten a lot of microwaved frozen dinners, so I am grateful that we will finally have hot water and a cookstove. Yes, I know I'm spoiled.
However, the entire roof of the house still needs to be replaced (hail damage), a section of fence ditto (torn up by the falling tree), the family room ceiling ditto (I remember noticing that it was raining in there when I was evacuating), and some carpets require professional cleaning beyond what my rug shampooer can do.
The memory of the terror caused by the storm will eventually fade. For now, we all get a bit anxious when the afternoon thunderstorms begin, and the dogs follow me from room to room.
*****
P.S. Happy Birthday to J.R.--you know I'll never forget your day.
Posted by clairz at 4:00 AM

I hadn't realized how much damage was done to your house by the storm, nor that you were still gasless. Can you imagine being internetless for that long? Perish the thought. I hope that same storm didn't wreak havoc on the chile crop.

Linda, the place where I left the door open for the cats to escape was a real mess, making me wish I had nice concrete floors like yours rather than the ucky (but new) carpets that came with the house. We'll change over to tile in some places, and uncover the wood floors in other places, all in good time.

Yes, thank goodness the Internet returned quickly. I must have reached for it a thousand times (in the hour it was off, LOL) and honestly couldn't remember how to do things the old fashioned way.

Just amazing all that damage. Gosh. The poor dogs. My two are afraid of thunderstorms and wind. I called the vet one day and the assistant suggested Rescue Remedy. Have you ever heard of it? I bought some, and I put 4 drops on a pat of butter on a plate and they lap it right up. And it soothes them. They stop pacing and lie down. It is incredible. It is really a people product but it sure works on Ben and Sadie. Oh, and what a picture on your header!!! What is that water called? A canal? A stream??

I am so very sorry about your damage. I've been busy with Summer things and not reading your blog like I should be.

Nan, I used to have a dog who was afraid of storms and that remedy would have been very helpful, because nothing else helped calm the poor thing. The dogs now aren't really afraid; they are just wanting to be sure that if I'm headed for the neighbor's house that I'm going to take them, too!

That water is called a canal or a ditch; acequia in Spanish.

JC, I've missed you but am glad you are enjoying your summer!

Clair,
I think i forgot to mention I love your new header photo! I didn't know that your gas had been off this whole time! Cold showers sound miserable. Good luck getting the other things fixed... at least you'll be warm & have home cooked food while you're taking care of the rest! What do the locals say, was that kind of a "freak storm," or does damage that severe happen often in Las Cruces?

Wow, I had no idea. I went and read your other posts. I've lived in Tornado country for over 30 years and have never seen one. I rode out a relatively weak Hurricane Alicia and swore that next time I'm going to Nebraska.

I hope that you get your repairs done .

Becky, it seems that everything that has happened here with the weather since we moved in is "freak." An unusually cold winter, much more snow than normal, an early monsoon season, etc.

Yogi, I still don't really know the name of what hit us. Frankly, the insurance adjustor is the only one who thinks we need a new roof, so we are ok with the old one until it all gets resolved. As long as I don't have to take cold showers, I am happy.

Wow, what a mess you've been dealing with. So proud of you that you forged ahead...and had blog posts for all of us in spite of your difficulties! No hot showers, no means of cooking real meals...but that didn't quell your pioneer spirit. On you blogged! You make us proud! grin.

wow.. that is a big damage... hope everything is alright now..

Deb, I love the mental picture of a pioneer in a covered wagon with a laptop!

Reanaclaire, thank you for your kind thoughts.

Cool photo of the baby pecans.
I'm glad you've finally got the gas fixed and back to working.

I like your new header. Boy those Acequias are full to almost overflowing!

My goodness Clair, having been away for several weeks I come back here to find tales of destruction to your beautiful home. What power in that storm. I'm now going to read on back to get the full story.
I hope you're gradually regrouping. Sending you my best wishes.

So glad things are beginning to get back to normal for you. I love your new header. It is so pretty. We used to have an australian shepherd that was afraid of storms and went nuts when it heard thunder. Now, my daughters have an australian that is the very same way. I hope the weather settles down there but there seems to be strange weather everywhere.

Just amazing. I am so sorry. I hope you can get it properly and quickly repaired.