The Pintada Kid on the Case: Part 4, Finding More Clues

On May 22, before she knew anything was amiss on her sister's vacation, Laura Lorius' sister woke up with a fright in Illinois and told her husband that her sister had come to her in a dream and said, "I've been murdered and buried under the floor of an old building. You'll have trouble finding me."
~Leslie Linthicum, Albuquerque Journal, 6/24/10 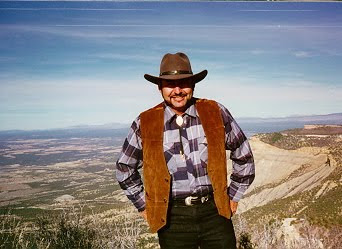 For those of you who have asked, the Pintada Kid is a real person. Because he is doing his typing on a sometimes unreliable battery-powered keyboard from somewhere in the center of New Mexico, he asks that I edit and publish his posts. I do that gladly, but remind you that this is his story, not mine.

*****
The Pintada Kid continues the story of his investigation into the Heberer Lorius case, in his own words. For a list of the entire series, click on the Pintada Kid on the Case tab at the top of the page.

Now that I knew the exact area [where the skeletons were located] more or less I decided to get permission from the rancher and go a few miles into his land where I was sure now I had been before. I went in alone in the middle of the summer and it was very hot and I managed to get as close to the top of the mountain as I could on my 4x4 and from there hiked around the top of the mesa with lots of trees and boulders everywhere. I was about to leave, thinking I had found the wrong area, but I decided to go over one last area I hadn't checked. I came to the cliffs and crevices that were 30 to 40 feet deep in places and lots of cedar trees and big boulders all around the area and cliffs that you don't want to get too close because the winds have a weird way of coming behind you and pushing you over.

Ok, so now I was sure I had the exact area and I started pretending I was a little kid playing on the rocks around these cliffs in this secluded wilderness full of big cats, rattlesnakes, deadly spiders, and other dangers. I came in from the top so I decided to go down into one big room that you could see into from a small opening at the top. After a few minutes of hugging boulders and carefully watching for my footing and rattlesnakes I made it to the bottom and there I had to rest, because my legs were so weak I could barely stand. I was wondering if I was gonna be able to get out and if there was another way out.


Anyway, after a few minutes of rest I was able to explore in that area and saw different openings and small crevices everywhere that I knew I would not fit into and even if I did they might be infested with rattlesnakes or the big cats, so I thought to myself I'm here to explore--not to find the bodies, just to learn the area so I can find it again and show the N.M. State Police where to look and leave it up to them.


One area I was going through was like a minature window rock and I was going to go through it, but decided to go around it instead. On getting to the other side, I realized that if I had moved any of the rocks at the bottom the whole thing would have collapsed and tons of rock would have buried me.


It was a weird feeling knowing that I had finally found the right place and on walking close to the cave
openings and walls it was like you could almost hear these people asking you to find them and
whispering to you. I now knew where the exact area was, according to my friends who had told me about the skeletons, so I knew I needed to have more proof.


By exploring around around the area, I found old adobe rock houses that appeared like ghosts from what seemed to be out of nowhere. All these old ruins had been baked in the sun for over 100 years and looked just like the landscape and rocks they were made of many years ago.  They are like part of the land and sometimes you have to just come up on them to [realize that they are there].  Some still have their roofs on and when you peek inside you can see the wild style these people lived in, with their horse stalls right next to their bedrooms, making them ready to ride at a moment's notice.


Whoever lived in these houses probably knew that the Heberer Lorius people were buried just a couple of hundred yards away and were very likely the ones that helped put them there.

*****
Tomorrow: Some ghostly appearances
Posted by clairz at 4:00 AM

Here are some historic postcards of OOB near your birthplace. Some go WAY back. Enjoy!

Here's the link to OOB.
http://historyoob.tripod.com/

Birdman, thank you! These will be perfect for a link on my new family history blog, Remember.

For those of you who might wonder what we are talking about, I had left a comment on the Port City Daily Photo (Birdman's blog) asking if he could travel back in time and take some shots of my original hometown, Old Orchard Beach, Maine. It turned out that he was able to do just that!