Santa and Me, Part 1

Note: This post is from my family history blog, Remember.
It's a firmly established tradition, the photo of the kids with Santa. It's also a given that the children in the photos will be scared to death, having been passed from loving arms into the lap of a stranger who looks like no one ever seen in a little kid's life.
I've been gathering up our family Santa photos from the 1940s and 1950s. Some are of Bill and his little brother, Ron; and some are of me. I'll show them here over the next couple of weeks.
The photo covers from Bill and Ron's Santa experiences were very retro. One was even done by Leonard Weisgard, who became familiar to me as a children's book illustrator when, much later, I became a children's librarian. Here are three of those covers: 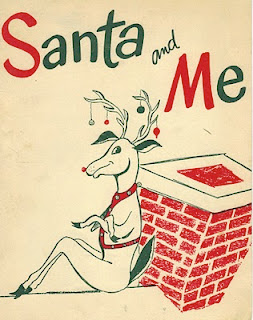 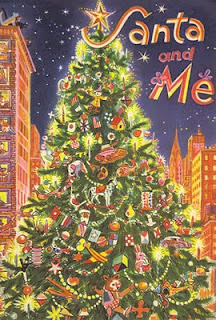 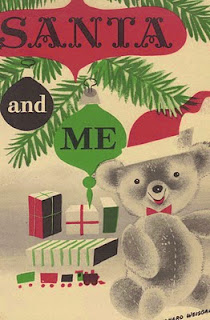 And here is the first in a series of photos of the frightened children in our family, learning about this most peculiar of Christmas traditions. We start with poor little baby Ronnie, who can't believe his eyes: 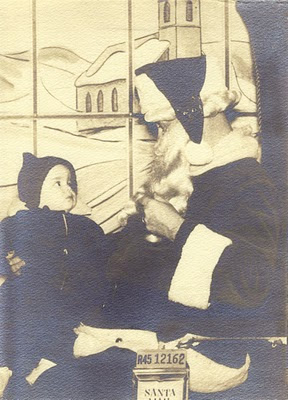 This looks like it's going to be a fun theme! I'm back posting and commenting again after my shoulder surgery, and I enjoyed these photos!

Someone is far better organized than I! will enjoy the photos. After the time I had to sit on Santa's lap to get my granddaughter into the picture, I gave up on such. She was 3, and it was a foster parent party. She was delighted with the Cat in the Hat roaming about, and insisted he dance with her. Got a print of the two of them for her to give her parents for Christmas.

Looking forward to these memories of yours.