Santa and Me, Part 2

This post first appeared on my family history blog, Remember.
*****
In the previous post [on the Remember blog], we last saw poor baby Ronnie looking at the bearded guy in fear and disbelief. This first photo shows his older brother, Billy (who became my husband much later), looking as though he is willing to give this business a try. He's not sure how the whole thing will work out, though. 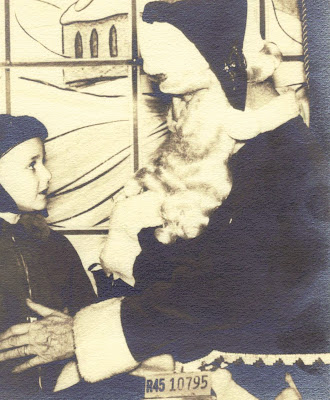 Here we are, the following year. Although Santa is really trying--note the present little Ronnie is holding and the bells the Santa is jingling--the youngest brother is still showing the good sense to be very afraid of the red-suited guy.
Billy, who discovered that the presents he listed for Santa actually showed up under his tree the previous Christmas, is anxiously waiting to get a word in edgewise. 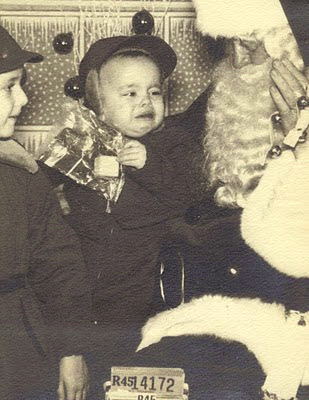 The same attitudes prevail a year or two later. Billy is starry-eyed, possibly thinking of a Red Ryder BB gun; while Ronnie looks like he is hoping that he doesn't get another darned bow tie in his stocking this time! 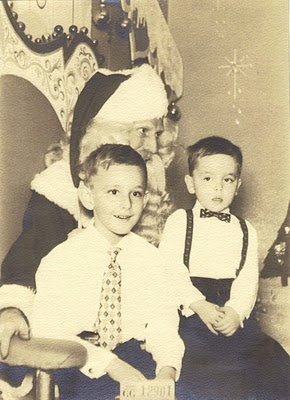 Those are adorable photos, Clair!

Loved the photos and the comment about the bowtie! Funny! Just wanted to come by and wish you and your family a wonderful Christmas and New Year. I will spend Christmas at the farm with my girls. We always cook (of course), watch movies, talk about old times, and play with the horses and dogs. We are supposed to have a white Christmas this year. Love and hugs, Judy

Precious! We have a lovely professional photo of Michael taken his first Christmas. Ten months at the time he had just learned to roll over. Since he still couldn’t sit the photographer put him on his stomach but before he could snap the picture, over he would go. His mother finally reached under the blanket that was over him to hold him in place until the picture was shot. I still smile when I remember that day.