I don't know why we are having the weather that we've had the last few weeks, but we've felt very lucky. While the rest of the country is struggling with torrential rains and blizzards, we are having relatively mild temperatures and mostly clear blue skies here in the Chihuahuan Desert.
At White Sands National Monument yesterday, families were sledding in the sand, which made it look a lot like very clean snow. At other times, when the sun came out from behind the light clouds, I could imagine that I could smell the ocean but, of course, it is far away from southern New Mexico.
It's tricky to take photos out in the dunes, especially if you aren't there early or late in the day when the sun is low in the sky. When we visited in the mid-afternoon, the clouds were helping to keep some of the glare off the sand, but it was still difficult to see potential shots on the little screen on my camera. I just kept pointing and shooting and hoping for the best.
Here are some shots of a yucca plant and its dried pods. 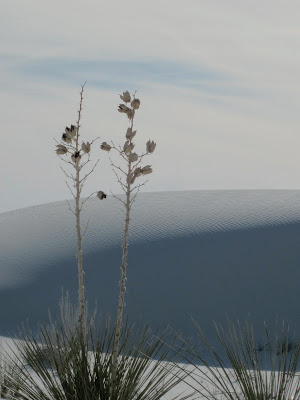 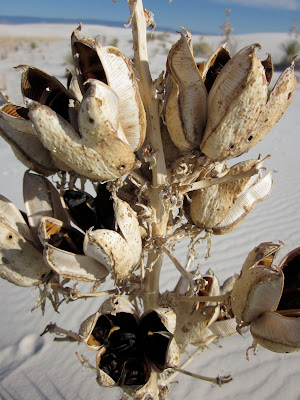 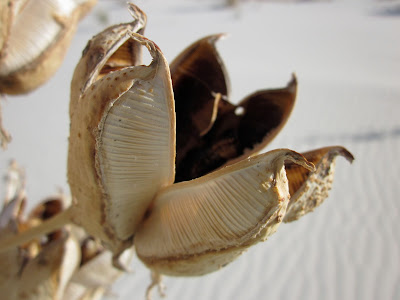 Nice pics. It is hard to get good photos in such a background but I think you did very well.

I love your pictures. You seem like you are a million miles away from me because of the sand and such I guess. Besides it is in the teens here with snow and that makes it seem even further! I hope you and your family have a wonderful healthy new year.

What a classic picture! You are such a good phtographer. Sledding down the dunes--what a great idea. We mostly just rolled down the tallest ones we could find, and that was fun, too.

Merry Christmas, Clair!
So this is what a yucca looks like in its natural habitat. I've only ever seen them as houseplants.

Sledging in sand! But why not?

That top one showing the dune pattern in the back is especially nice. And as for fixing the blown out parts, if your camera will shoot RAW format, you can do it, but if not, probably not. Email me if you'd like to talk about it. RAW is perfect for just such situations.

Sara, my son is always after me to use the RAW setting. These pix were taken with my little camera, which doesn't have that option. My big camera does, and it's just a matter of me taking the time to explore that whole thing. That's what I love about photography--there is always so much more to learn!

I agree. I'm grateful for our beautiful weather, but also a little disappointed in our lack of of a White Christmas this year....the first time in at least 7 years.

Your yucca pod photos are lovely. Especially in the sand dunes.
I'm planning a road trip with my kidlets down through Alamagordo and Las Cruces before the winter is up. There are lots of letterboxes to look for down there, of course, but I think the kidlets would enjoy sledding on the sand dunes, too.