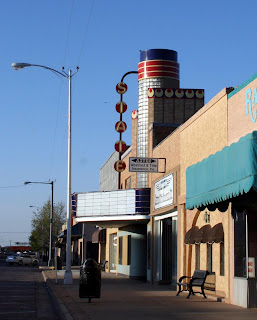 Clovis is home to three wonderful old movie theaters, in addition to a more modern multiplex. Two of the old classics are still open, and the third is just waiting for someone to come along to renovate it.

When I was a child in San Francisco, I was allowed to walk to the Saturday matinee movie with a couple of friends. We went to the Surf Theater on 45th and Irving which was just a few blocks away from our home down on 48th Ave. between Judah and Irving. A quarter would take care of the movie ticket and some Junior Mints, with plenty of change left over. The matinee started out with previews of coming attractions, then cartoons, then a serial with a cliffhanger ending "to be continued" the next week, and then the featured attraction. Read Remembering the Coliseum by Pat French Swendsen for a delightful description of kids at a San Francisco matinee just a couple of decades before I was enthusiastically watching Francis the Talking Mule movies.

The most beautiful theater renovation I have seen as an adult was The Moore-Egyptian (now called The Moore Theater) in Seattle, which was showing foreign and revival movies back in the 1970s when I went there. It earned a spot on the National Register of Historic Places in 1974.

The Cinema Treasures website ("Discover. Preserve. Protect") is devoted to movie theater preservation and awareness and is “…reinventing historic preservation on the web.” It lists theaters by architect, chain, location, etc., and shows them as being open, closed, renovating, or demolished. 98 theaters are listed for New Mexico.

I recently photographed the old Clovis theater exteriors. The information in the captions comes from the Cinema Treasures website.


The Lyceum Theatre (Restored vaudeville theater, first opened in 1921, designed by Boller Bros. in the Mission style. Still in use) 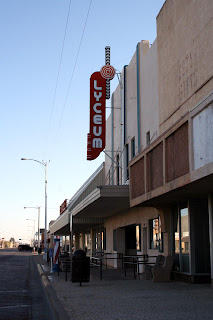 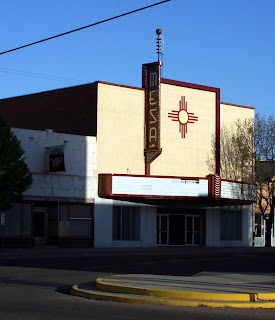 Mesa Theater (closed)
Posted by clairz at 8:28 AM