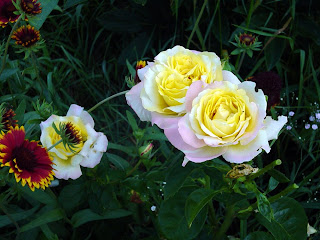 Slate Magazine, in The Midlife Happiness Crisis, reports on "a new study by economists David Blanchflower of Dartmouth and Andrew Oswald of Warwick. They document how happiness evolves as people age. While income and wealth tend to rise steadily over the life cycle, peaking around retirement, happiness follows a U-shaped age pattern... Happiness starts off relatively high in early adulthood, then falls, bottoming out on average around age 45, and then rises after that year and on into old age."

As a relatively new retiree, I'd like to second that notion. Retirement is a wonderfully happy time, after you've done a bit of adjustment. First, you have to get over the guilt you feel when everyone else seems to be zipping off to jobs and stress in the morning. Then you just have to find a way to use the lovely gift of time that you've been given, in a nice balance of service to others and giving yourself permission to do all the things you've been wanting to do--and hoping for the physical capability to do all those things.
Posted by clairz at 7:31 AM

Did you plan for retirement and have a good financial package for you and the hubby? Did you plan on your own or did you have an adviser?
I just started a 401K with my last two jobs, but I don't have a goal...or know exactly how much I'll need to live.

Well, Erikka, I was shortsighted when younger and kept cashing in my retirement funds whenever I moved to another job. Luckily, getting (finally) certified and earning my master's degree meant that I would get some retirement from NH in addition to my Social Security. I was able to buy some extra years of service in NH in the last year they offered such a deal so I ended up with a larger check from them each month. We did everything we could to get debt free (should have done that way earlier) before I retired. Even with doing all those things I still couldn't do what I'm doing without my husband's income. He has stayed with the same company and will have a variety of pensions and a 401K when he retires in a few years, so we will be just fine.

My advice? Keep your 401K going, no matter what and put in the maximum allowable that you can. Never borrow from it or cash in any retirement fund. Getting your master's is going to increase your earning power for your whole life--smart girl!!--so you'll be able to stay away from debt. And pay off your mortgage, when you get one, faster by always paying a bit more than the required payment--that will pay down your principal much faster.

We didn't use an advisor, but then my husband has a master's in business education, so we used his knowledge. We just came kind of late to our financial planning. Obviously, you aren't making that mistake!