Elva's fancy 50s kitchen.
It even had a wood-fired grill with a copper hood. 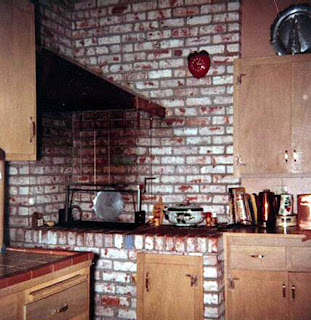 My mother, Elva, was born in 1914 on a farm in eastern Canada. In her lifetime she saw amazing things--families changed over from driving horses to driving automobiles, the national highway system was developed, telephones were installed in homes and then the cell phone was invented, and household labor savers like vacuum cleaners, automatic clothes washers, dishwashers, and the microwave became common. We got our first television set (black and white, of course) in the early 1950s, opening up a whole new world of entertainment with its three channels. Computers were invented and changed over time from room-sized to pocket-sized. The Internet was really getting going in her later years, but I could never interest her in it.

One thing always remained the same with my mother. She loved to cook--whether on the wood cookstove of her youth or the fancy GE countertop burners in her first new house in the 1950s--and she loved to try out new recipes. Here is one of her favorites, probably cut out of a magazine in the 1960s.

These pancakes are very tender.