The house on High Street 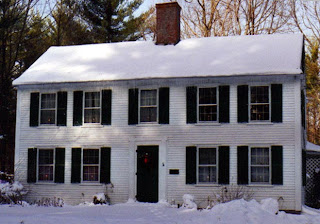 Our house back in New Hampshire was a center-chimney Colonial that had been built in 1770. We were charmed by its fireplaces. There were four, all built around that huge center chimney which gradually widened so that the base down in the cellar, built with a big brick arch, was at least twelve feet square. Each of the fireplaces had metal cranes, hinged at the side of the firebox so that they could be swung out over the hearth. You could hang your iron pot, if you had one, on the crane and swing it back over the fire.


The biggest fireplace of the four was in the old original kitchen, the room to the right of the front door in the photo above. Next to the fireplace opening was a small wooden door, covering what we supposed was a box for holding firewood. We struggled to pull that door open but just couldn't budge it. Several weeks after we had moved in, we heard a great crashing downstairs in the middle of the night. Because so many other "interesting" things had already happened to us since moving in, we chose to pull the sheets over our heads and wait until morning to investigate.

The next morning we cautiously came down the narrow curving "captain's staircase" that was built around the chimney. We were amazed to find that the little door, jammed fast the last time we had seen it, was now all the way across the room and up against the opposite wall. It was just as though the house was inviting us to look at what the door had been concealing.

What we saw were two openings, one above the other, built into the brickwork next to the fireplace and running back along the depth of the great chimney. The top opening was a much-coveted beehive oven and the bottom one revealed a storage space with all the old iron pots to hang on our empty cranes! We were thrilled to find that we owned a further bit of history. Research at the local library (in those pre-Internet days) showed that the Colonial housewife would build a small fire in the oven, close it up with a hinged iron door until the whole thing was thoroughly heated, rake out the coals and brush out the ashes with a long turkey feather, then do her baking. A good oven could hold as many as 17 pies, and could certainly bake up a quantity of bread and baked beans.

We searched around the property for years for the missing iron door to cover the oven but we never found it, although the hinges were there.

When we moved to New Mexico I was fascinated to see that many yards in the older parts of Las Cruces had beehive-shaped outdoor ovens, or hornos, made of adobe. According to this National Park Service website for Petroglyph National Monument near Albuquerque, NM, the Spanish explorers brought wheat to the Pueblo Indians, who had previously made their bread from corn meal dough flattened and cooked on hot flat rocks. The Spaniards taught them how to build hornos, which can be built of sandstone, lava rocks, or adobe bricks.

The photo below is one I took of an horno at the Pecos National Historical Park in Pecos, New Mexico. 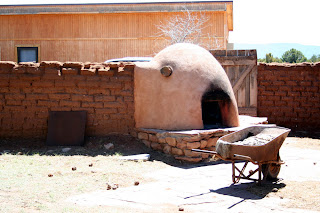 Its amazing what you can find in the old new england homes. After my grandparents home was sold, the new owners unearthed some 1800 era letters in a wall. They showed them to my mom, who didn't think to ask them for a photocopy. Would of loved that to add to my genealogy albums.

What a shame that you didn't get copies. We found a wall full of bank statements and overdrawn checking account notices in the back hall of that house. I guess the previous owner was keeping them a secret from his/her wife/husband. Not very historical, though.

you have to love history...and all the possible secrets stored in physical objects of the past. there is something about the old and the new I have to have anywhere I live...probably why I will never move out of new england.

I am considering buying a center chimney colonial (about 1800) and was looking for beehive chimneys when I came upon your site. I live off of High St in Hampton! The house I am interested in is on Winnacunnet Rd and needs everything. I would love to know if you renovated yours and what sources you might have used to accomplish this. I would like to do it right.
I would love to hear from you-we might know each other!

Pam, I hope you check back here, because I have no other way to contact you. Living in that old house was magic in many ways (some of which I will write about on some upcoming blog posts). However, we never really had enough money to completely re-do the place, and sort of lurched from crisis to crisis, trying to keep the house from falling down around our ears. Literally, I mean--the dining room ceiling fell down one night. We heard it and didn't even get up to investigate because we knew we'd need our sleep to cope the next day with whatever had happened.

So, if the house you are looking at has all new systems and has been made energy-efficient and has been updated and is in good shape and you are, more or less, wealthy enough to pour money continually into it, you should go ahead and buy it. Living in a piece of history is romantic and wonderful and an unforgettable experience. And it is very, very expensive.

On the other hand, you will gain a new appreciation for that great old Tom Hanks movie, The Money Pit.

Hi Clairz - The Money Pit is one of my fovorite movies and this house will probably be just that. Nothing has been done to it in many.......years. If it is structurally sound we may consider it because it is in a great location with an acre of land and a great price. I've always wanted and older home to restore and if
I don't do it now I might be to old to have the energy if the chance comes up again. Pam

Pam, you've inspired me to write up the details of finding, buying, and fixing up that old house. The first post will appear tomorrow at 7 AM (Mountain Time). Stay tuned, and thank you for reminding me that I have a great deal to say about living with history.

Be sure to let me know what happens next with you and your historical house!

P.S. I deleted my two previous comments because of pesky spelling errors.

Thanks - I'll check back in and let you know what happens.
Pam