Ready to go downtown in winter 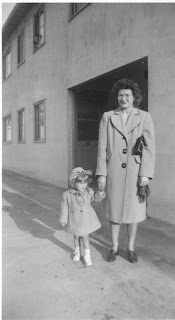 While looking at old photos and reminiscing, I remembered an annual family tradition that started in the 1940s in San Francisco. We always went downtown on the street car, my mother and me (Dad was at work, as all men were in those post-war years), to see the Christmas decorations in the big department stores. We would go for evening drives later when my father got home from work to see decorated outdoor places like Maiden Lane, which I now find was originally an area of brothels(!) that had been converted to fancy shops that were decorated beautifully during the Christmas season.
I remember going up the escalator and all but gasping at the sparkling decorations in the Emporium* on Market Street. We always went to I. Magnin's, and Macy's, too. The transformation of the familiar stores was amazing and it seems to me that the decorations were far fancier than anything we see now. 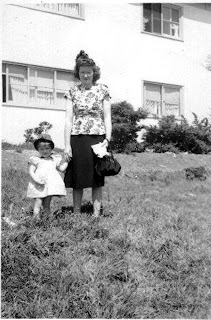 Dressed up in spring

You know, we used to get pretty dressed up to "go downtown." For me, always a coat and matching hat, if possible (my mother made a lot of my outfits), and a little purse to hold my white gloves. My mother insisted on those gloves when we rode on the streetcar. For my mother, a dress, high heels (how did she do it?), matching purse, coat, hat, and gloves. 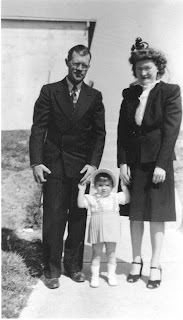 Beez and I recently received an invitation in the mail for a Christmas party, being held in a pretty fancy part of town, to honor volunteers of a local charitable organization. The invitation, in addition to giving other details, specifies "spiffy casual" dress. Whatever that might be, it points out how much things have changed over the decades. People get dressed up less often, and so do our public places, especially during holiday times.

***
*I feel so historical. While looking for links to the stores and places I remember in downtown San Francisco, I found that many of them are gone and a part of history. I guess I am, too (a part of history, not gone).
Posted by clairz at 7:59 AM

Ah, aren't we all? Kind of like other historical relics! I'm sure there are lots of good things about being one of those, but damned if I can name any off the top of my head! I do remember those days, although not in SF, but in Texas where everything was dressed down considerably! Fun post, as always, thanks!