Taking Another Look at California 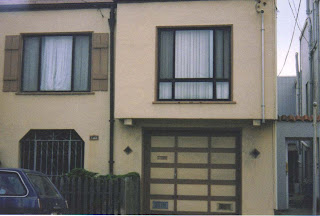 My parents moved our little family of three (Bucksnort came along a little later) to California from Maine when I was an infant. I grew up in San Francisco, just a block from the beach in a little house they sold in 1955 for $11,000; then in Marin County, in one of the suburbs that were springing up in those post-World War II decades, in a house they bought for exactly, I remember, $19,950. In recent years, either house was valued in the six hundred thousands, although prices have fallen a bit lately, even in these expensive areas.

By the time I was 21, I was anxious to leave California, finding fault with the traffic and ever-increasing development. After leaving, I lived in British Columbia, Washington state, New Hampshire, New Mexico, Connecticut, then New Hampshire and New Mexico once again.

I still see those things when I go back to California for a visit--crowded highways and the resulting smog, and endless developments that fill up the farm and ranch land that I remember from my childhood. But I was surprised, on this trip, to find that I was enchanted by the other parts of the landscape--the deserts, the mountains, and most of all, the beautiful rolling foothills, grassy and studded with bay trees and live oaks, still festooned with the mistletoe I remember from my childhood. I had brought along lots of knitting to work on during the many hours of riding in the car, but found that it sat there in my lap while I admired the scenery.
Northern California foothills 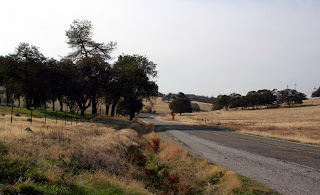 My youngest daughter lives in Santa Rosa, CA and your picture reminded me of the landscape there. There are many beautiful things in CA, but I don't think I could live there, maybe once upon a time, but not now. Thanks for the trip! Amazing about house prices, isn't it. I still can't believe what my son, Adam, paid for this 84 year house we live in here in Seattle! Mind boggling!