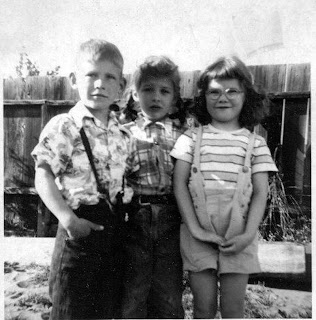 Nowadays, for whatever reason, when I walk or ride my bike around the neighborhoods, I rarely see children outside playing. Back in San Francisco's Sunset District in the 1940s and 1950s, we kids were rarely inside. We rode bikes, jumped rope, roller skated, played long and involved games of something we called "covered wagon," and, of course, we always had a cowboys and Indians series of some sort going on. The rule was more that kids were out playing, not in.
My own kids played outside a great deal at our place in Washington state in the late 1970s. There were chickens, ducks, goats, sheep, pigs, and even a donkey to either play with or run from. These kids from the two neighboring houses joined my son, Ben (the littlest), in a somewhat crowded "day at the beach."
Edgewood, WA, 1977 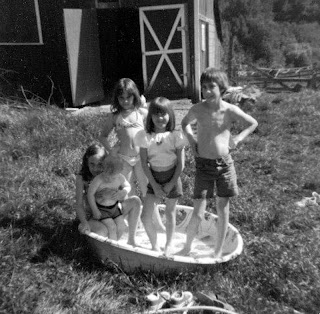 Interestingly enough, my own grandchildren posed for a similar photo in California, not too many years ago. They live a wonderfully healthy lifestyle, as their home is situated in a dead-end court where the neighborhood kids join in playing ball and riding bikes--not so different from my own childhood. Except, as my son would say, their life is in color. 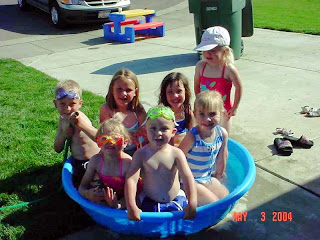 A surprising number of kids here are in the same Zee family; another has been added since!

Lovely family memories! Now, when that first photo was taken in 1950 I was graduating from high school! Don't you feel like a youngster!
Thanks, for sharing, fun post!

I really enjoyed reading this. Outside rules; it still does in my opinion! Loved the photos.