Facing Up to the Past: Visiting Trinity Site

Trinity Site is a long way from our house but the ride is gorgeous. We passed through all kinds of terrain—prairie, desert, mountains, and something that looked a lot like California before all the people came—on our way to and from White Sands.

Just before reaching the Stallion Gate we were met by some very friendly folks who gave us printed directions and a brochure. It turns out that they were counting people and pets in the cars headed out to the Trinity Site. I’m not sure why they keep track of the pets, but you can check out past counts at http://www.wsmr.army.mil/pao/TrinitySite/trnatt.htm. Then we came to the gate where the scrutiny was a little more intense. We presented our identification documents and were allowed through.

Once we got up to the parking lot, we were surrounded by groups of people who had been riding too long together in cars. We noted license plates from New Mexico, of course, and Colorado, Texas, New Hampshire (we left those people a note), Michigan, Montana, Massachusetts, Wisconsin, Virginia, Idaho, and Illinois, and then we stopped keeping track because we were also too cranky from riding in the car. 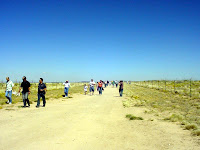 Out to ground zero—it was a big disappointment. I would have thought that such a monumental event would have left behind more obvious evidence. There is just a slight circular depression, not a crater, as you might expect. The 1945 blast melted the desert sand into a green glassy substance called trinitite and the information I had seen implied that I would see plenty of it. However, the the government had apparently taken most of it away years ago so there was none to be seen.

Apparently there is an area that contains some of the original trinitite in place, now covered over with sand, but it has a shed built around it that is no longer accessible. We saw lots of people crawling around looking for little bits that might be remaining, but no one seemed to be finding any. It’s illegal to pick it up—dangerous, too, as it is still radioactive. 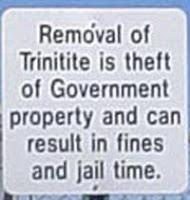 Since I wasn’t finding the site itself interesting, I concentrated on the beautiful surrounding scenery and the people crowded around me. According to past figures, around 2800-3200 people attend these open houses. I was saddened to see some young kids who must have belonged to some kind of paramilitary organization tromping around in big boots and overlarge uniforms.

Seeing them made me wonder if most visitors saw this whole atomic bomb thing as a tragedy of the greatest magnitude or as just another kind of theme park. 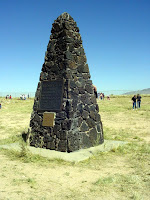 There wasn’t any ceremony, there weren’t any speeches—just a lot of tired, hot, crabby people shuffling around from historical marker to photo to bomb casing. Photography is allowed at the site, but not on the rest of the White Sands Missile Range. We left after taking lots of photos of the crowd and ground zero. I was relieved to be leaving, especially when I saw a group of what looked like Japanese tourists approaching the site. There was no right expression to put on my face, no way I could look them in the eye.