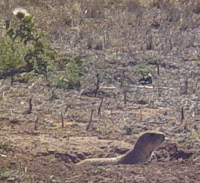 Humans and prairie dogs are, quite simply, in competition for the same land. People want the land for growing crops, grazing cattle, and for new construction, and the prairie dogs get in the way of all of those things. You can read about the history of the relationship between prairie dogs and humans in Becoming a pest: Prairie dog ecology and the human economy in the Euroamerican West, by Susan Jones. Environmental History, Oct. 1999.
Prairie dog colonies used to stretch for miles. Prairie dogs are prairie restorationists, helping undo some of the damage caused by humans. They help conserve water by channeling rainwater back into the water table, and they help improve soil health. By 1960, the population had been reduced by perhaps 98% by disease, poisoning, shooting, and habitat destruction. I see this destruction every day, right down the street from my house, where new houses are being constructed right in the middle of prairie dog towns. I suppose from the contractor’s point of view the prairie dogs are tearing up the next house lot he plans to build on.

The Prairie Dog Coalition is “dedicated to the protection of imperiled prairie dogs and restoration of their ecosystem [by providing] information and advocacy training, [facilitating] communication and planning, and [promotion of] conservation projects.” They explain that prairie dogs are “keystone species,” supporting an entire ecosystem:

For another web site with photos and general information: http://www.bobatkins.com/photos/PDZ1.HTM
Posted by clairz at 1:43 PM