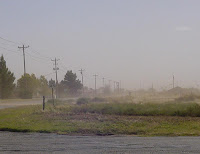 The wind has been howling now for two days. It is blowing a solid 35 mph with gusts up to 50 mpg. I “tuned” my windows by opening them just a crack to make the sound even more dramatic, but I shouldn't have done it. Tiny particles of dust are now floating in the inside air, and there is a gritty coating on every surface.

There is drama enough outside. Yesterday a field caught fire and by the time the wind wound down after sunset, 22,000 acres had been burned. This fire jumped the four lane highway between Clovis and Portales, while fire companies from surrounding towns used their equipment and even some tankers from nearby dairies to fight the flames. I was out in the wind in the afternoon, taking pictures of the good New Mexico soil blowing east on its way to Texas, and I watched as a big piece of plastic tarp just hurtled across a whole field—it must have gone 100 yards in practically the time it takes to tell it—so I can imagine the speed of those wind-driven flames.
Dust Storm, Colorado (Library of Congress)* 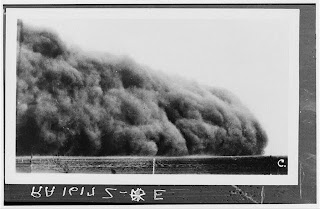 Driving to Las Cruces from Arizona several years back, my husband and I were almost caught in a severe dust storm just outside of Lordsburg, NM. The highway signs there say Warning—Dust Storms May Exist, Next 17 Miles, but there isn’t a big enough warning possible for what we saw approaching the highway from the left. It was a sky-high cloud of dark brown, gathering up more and more soil from the fields it crossed as it headed for the highway. We had no idea what the right thing to do might be, but we did know that we didn’t want to get caught in that absolutely frightening thing while either driving or stopped along the highway, so we made the almost instant decision to try to outrun it. As we sped through the valley, we could see cars stopped any which way on the other side of the divided highway. It was apparent that another storm had just passed through and caught them. I saw a figure running wildly down the fast lane, arms outstretched and mouth wide open in terror. I had just that glimpse as we hurtled forward and got to the safety of some nearby hills. 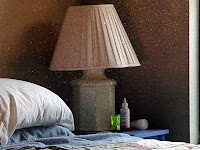 Listening to this wind, I think about what it might have been like to live during the Dust Bowl years. Here are a few web sites with amazing Dust Bowl photographs and other information about dust storms.

Dust Bowl Photographs: http://www.weru.ksu.edu/new_weru/multimedia/dustbowl/dustbowlpics.html
Dust Bowl Information and Photos—the second picture shows a dust cloud much like the one that almost enveloped us: http://www.usd.edu/anth/epa/dust.html
NASA Photos of a dust storm as seen from space: http://visibleearth.nasa.gov/view_rec.php?id=6220
Voices from the Dust Bowl: http://memory.loc.gov/ammem/afctshtml/tshome.html
Wind and Dust Storms across the Southwest (explains how dust storms are formed): http://www.srh.noaa.gov/elp/swww/v8n2/Wxbul8.2.8.htm
*Dust Storm, Colorado: The Library of Congress does not believe that there are any restrictions on the publication of this photo. If you know of any, please let me know via the comments section.
Posted by clairz at 6:55 AM