This is it—Today is Blog Action Day. Bloggers around the web are uniting to put a single issue on everybody’s mind—the environment. According to the Blog Action Day web site: Every blogger will post about the environment in their own way and relating to their own topic. Our aim is to get everyone talking towards a better future. Close to 16,000 blogs with over 12 million readers are participating. This would be a great day for you to contribute to an environmental charity. Start here. http://blogactionday.org/charities .
**********

I am certainly no water expert, but I hadn’t lived in the southwest for long before I decided I wanted to learn more about the subject. Newspaper articles often referred to the Ogallala Aquifer, so I wanted to find out what it was and why it was important. Here is what I’ve learned.

The Ogallala Aquifer is a vast deposit of water lying under eight states in the High Plains of the U.S.: South Dakota, Wyoming, Nebraska, Colorado, Kansas, Oklahoma, New Mexico, and Texas. It is variously estimated to cover between 174,000 and 225,000 square miles, and lies between 50 and 300 feet below the surface. It was formed about 10 million years ago of gravelly soil that holds groundwater down below the water table. Experts believe that the aquifer contains roughly the amount of water contained by Lake Huron. 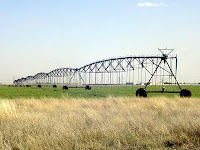 Drawdown, or water use, of the aquifer occurs when agricultural, industrial, and residential users withdraw water for surface use. About 94% of the water is used for irrigation in areas that formerly were a part of the Dust Bowl back in the 1930s. Recharge, water going back into the aquifer, comes from rainwater and snowmelt, a slow process in this dry climate area. Since the 1970s it has been apparent that drawdown is greater than recharge, leading to an ongoing depletion of the aquifer.

Adding a whole new aspect to any water discussion is our search for alternative fuels. The biofuel ethanol seems like a great answer to our dependence on oil-producing nations. However, in order to produce one gallon of ethanol, three to six gallons of water are used. Even more water is used in growing the corn necessary to make the ethanol.

The states concerned wrestle with issues of water policy, conservation, sustainability, and ethics. Should the water be used now, or should policy dictate sustainability? Do we continue with current irrigation practices to grow the corn and wheat that our economy demands, or should we conserve for the future? Do we continue expansion of biofuel production at the cost of permanently damaging water resources?

For more information, research, and discussions about the Ogallala Aquifer, see the following links.

Ogallala Aquifer and Ethanol - The Potential for Another Dust Bowl: http://www.autobloggreen.com/2007/09/21/ogallala-aquifer-and-ethanol-the-potential-for-another-dust-bo/

Thank you so much for participating in Blog Action Day and for bringing it to our attention. Thank you also for such an informative entry.

Please consider submitting it to a few newspapers (virtual as well as old-fashioned) as an article for publication. It's so well written and such an eyeopener, it should be reaching as wide an audience as possible.

After reading Timothy Egan's The Worst Hard TIme, a superlative non-fiction on the American Dust Bowl experience of the 1930s and the National Book Award winner, I set out to explore more information about the Ogallala Aquifer. I appreciate your website among the many resources available to the lay reader. I'm hoping you will share more of your research. We, as an American people, need to be more aggressive in our understanding about how precious this aquifer is to the stability of the globe.
Sincerely,
Susie
St. Louis, MO

I know that you posted this some time ago but I was just surfing the net in regards to the Ogallala and happened across your Blog. It was in interesting read and did bring up an issue that I had forgotten about. that being the use of water to produce the fuel and the amount of water that is required to grow the corn in the first place. As you know corn is not exactly the most efficient plant when it comes to using water and just wanted you to know that my class today did some discussion today using what I read in your blog. I teach a Johnson Country Community College in the Kansas City area. Thank you for reminding me of an issue that I did know about but had forgotten. Again Thank you

I just drove through Denver and Nebraska, and wanted to learn more about the Ogallala Aquifer. The aquifer falls under the "tragedy of the commons" situation - a resource with unrestricted demand will eventually doom that resource. Thanks for the info and useful links.

I found this site using [url=http://google.com]google.com[/url] And i want to thank you for your work. You have done really very good site. Great work, great site! Thank you!