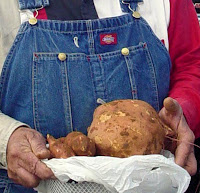 I’ve been reading Barbara Kingsolver’s book, Animal, Vegetable, Miracle; A Year of Food Life. Kingsolver, her husband Steven Hopp, and daughters Camille and Lily, moved from Tucson to the family’s farm in southwest Virginia. Their aim was to eat only food that they grew themselves or that was produced locally for a whole year.

We have gotten used to eating food out of season—food that is transported all over the world. There is a movement, variously referred to as Slow Food, or eating locally (those who do are called “locavores”), that challenges us to eat a more healthy diet and to help the environment and the local economy by not buying food that has been transported for more than 100 miles (“oily food” according to Steven Hopp). In doing so, we eat fresher, more wholesome food and support sustainable agriculture and our local farmers.

Here are some examples of “oily food” from my own kitchen here in Clovis, New Mexico. I have a package of Cape Cod dried cranberries which was purchased in Manchester, New Hampshire before we moved here. Cape Cod, where the cranberries grew, is 120 miles from the store where I bought them--a little over the 100 mile limit I’m trying for. However, the label tells me that the cranberries from Massachusetts were packaged in Kingsburg, California! That’s 3142 miles from Cape Cod, so my cranberries traveled from Cape Cod to Kingsburg to Manchester (and we know that there were probably grocery distribution centers involved along the way that would increase the mileage) for a total of 6,265 miles, plus the 16 mile round trip I made to and from the supermarket. I’m shocked, are you?

I don’t even want to try to compute the miles traveled and the gas and oil used to produce the grape juice I bought recently here in Clovis. The label tells me that it contains concentrates from the United States, Argentina, Brazil, and Chile. I could have bought fresh apple cider from right down the road.

When you eat locally, you can buy directly from the producer, often at farmers markets, or directly from the farm. Much of this food is produced organically, because it is grown on a small scale. The meat comes from animals who have lived a good life and have finished it up in grassy pastures, not in the crowded horror we see at feedlots.

We buy more and more of our weekly food from the Clovis Farmers Market. I have spent some time looking at sources for grass-fed beef and other meats, then checking maps to find which are closest to home—preferably under the 100 mile limit. Local Harvest is a good online resource for the best organic food that is grown closest to you. Check the distance from your door to the food producer’s door on Google Maps. The Animal, Vegetable, Miracle website has a good list of resources to help you start eating locally.

Sustainable Agriculture: http://www.sarep.ucdavis.edu/concept.htm
Posted by clairz at 5:50 AM