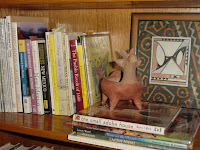 Thanks to Towanda, over at La Casa de Towanda, I have been reading Michael McGarrity books one after another. McGarrity has a wonderful web site with all kinds of information about himself, his books, and their settings. I am now about halfway through the books in the series featuring Kevin Kerney, which are set in various areas of New Mexico. Here is what McGarrity has to say about Kerney:

“When I developed the character of Kevin Kerney, I wanted to put on the page a fully-drawn individual who would run counter to the trend of quirky or emotionally damaged protagonists in mystery fiction. Kerney carries his scars and emotional baggage well, and has a strong moral fiber which rarely takes him over the edge. He is a man who knows the difference between right and wrong and practices his profession with a sense of ethics, responsibility, and pride. While he's strong-willed and persistent, he is neither overly macho or flashy.Born on a ranch in the Tularosa Basin in south central New Mexico, Kerney has long dreamt of returning to his roots, which was taken away from his parents when the military expanded White Sands Missile Range, a high-security weapons testing facility.A college educated, decorated veteran of Vietnam, Kerney's life took a different turn when he entered law enforcement after military service, advancing through the ranks to chief of detectives in the Santa Fe Police Department until a gunfight with a drug dealer forced him into a painful, unhappy medical retirement.”

The books in the series, listed below, clearly show that to Kevin Kerney the idea of “being retired” means something very different from the usual definition.

This is a list for me as much as it is for you. I wanted to be able to scan through the titles in chronological order and to know where each was set in New Mexico. The links will take you to McGarrity’s page for each title, where you will find a synopsis, reviews, a location map and information/photographs about the locale, and book ordering information. As a recent retiree, I’m always interested in how people fill their time. Read what Kerney does with his!

Hi clair! I am glad you are enjoying the McGarrity/Kerney books. I have been enjoying them so much: the character development, all the New Mexico settings and McGarrity's writing style. I am up to "Everyone Dies" but I need to wait till my hubby finishes it!