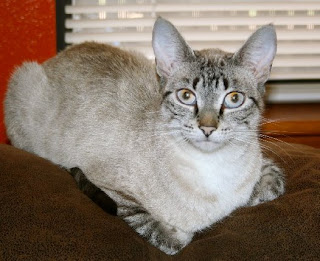 I thought about President Obama's starfish story (below, part of his recent speech on community service) the other day when visiting our local oxymoronically-named "kill shelter" with my sister. There were so many lost souls there hoping for rescue. I knew that it was kill day and that we already had enough dogs and cats at home. Even so, we brought home Gracie, who was still lactating from a recent litter, and was extremely thin and scrawny.

Gracie has been eating and resting and grooming herself. In just over a week she is looking much better and is starting to play with the other cats.

It was all I could do. We left so many behind, but we were able to make a difference for this one.

To find an animal shelter in your area, go to http://www.animalshelter.org/shelters/states.asp.

An old man walking along the beach at dawn sees a young man picking up the star fish and throwing them out to sea. "Why are you doing that?" The old man inquired. The young man explained that the starfish had been stranded on the beach by a receding tide and would soon die in the daytime sun. "But the beach goes on for miles," the old man said. "And there's so many! How can your effort make any difference?" The young man looked at the starfish in his hand and without hesitating threw it to safety in the sea. He looked up at the old man, smiled and said, "It will make a difference to that one."

Gracie is a beautiful (and very lucky) kitty. I'm glad she is starting to feel at home.

We have been visiting local shelters a lot lately looking for a dog. We can only afford to have one dog (and we haven't found the right one yet), but it is very wrenching to leave all those sweet dogs and cats behind.

Grace is the perfect name for such a graceful gentle Lostling. Thank you and thanks to all of those who do their not-so-small starfish part by rescueing a lonely frightened creature.

This isn't the first time you've rescued a sweet innocent Lostling and given it a warm bed, a full bowl and a loving forever home. I'm sure it won't be the last.

Your Kitty looks a lot like my Lilly Ann. She was a feral that I rescued. I remember thinking, oh what have I done.

What a great story Clair. That's the way we should all look at the world. If we can make a difference in the smallest of ways, we should!

Clair,
That is a wonderful thing that you did. BTW, when is 'kill' day? I have been meaning to go take a look for a new pet for us & a companion for Bear. I'm so happy for you.

Suzanne, I believe that the shelter staff once told me that the kill days were Tuesdays and Thursdays. I may be wrong, but I have kept that in mind always. I don't really want to talk to them about it too much. They are nice people doing an awful job in terrible circumstances.

There isn't enough money here for animals to be kept in the shelter more than a few days. There are an awful lot of doomed pit bulls there. Somehow they are an attractive breed to a human population segment that doesn't believe in (or can't afford) spaying and neutering.

My sister, "Auntie Bucksnort," is looking into doing some volunteer work with a local rescue group, so she is going to be our information pipeline for what's happening with animals here in town. Her blog is "but first..." listed on the side of this blog.