But No One Camps Out for the Pit Bulls

Young pit bull mix, waiting for his fate at the Clovis Animal Shelter 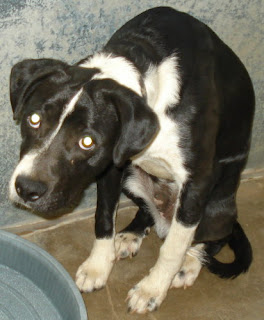 Bucksnort and I went down to the animal "shelter" last week to return Gracie's cat carrier so that someone else could use it. We said we wouldn't go back to look at the animals, but Buck wandered off and came back with big eyes, saying you've got to see this. She insisted, we went, I saw.
We knew we had to rescue that tiny Chihuahua mix pup, huddled in the back of his cage and trembling, trembling. There was so much noise from the big dogs, the desperate and doomed pit bulls, that the tiny pup just couldn't stop shaking.
The shelter's policy is to hold strays for five days to give their owners a chance to claim them. The pup's five days would be up the following Monday and he would be available for adoption at 10 AM when the shelter opened its doors. The policy also states that no dogs can be "reserved" ahead of time--it's first come, first serve.
The shelter people said that several people were interested in the tiny pup. Figuring that he would end up with a home, I would have given up at that point, but not our Buck. At 10 PM on Sunday night, she parked her car up against the locked gates and camped out there all night. I came down at 8 AM bringing coffee and was the 3rd car in line. Just before 10, when the place was due to open, a big pickup bypassed the line of cars (now numbering five), parked up ahead, and its occupants hopped out and stood at the gate ahead of Bucksnort's car.
It looked bad there for a moment, especially since the woman and her daughter said that they had been promised the tiny pup by shelter staff on Friday (not true). But the good guys won (that would be us, of course). The shelter staff knew that Buck's car had been there first and knew that the lady was lying about having been there at 7:30 all alone. Lies, lies, lies. She was setting such an awful example for her little girl.
So, thanks to my wonderful sister, little Bertie-Pierre arrived and is scampering around playing with the big dogs and Gracie. The other cats scare him. He has a great home and a wonderful Auntie Bucksnort. 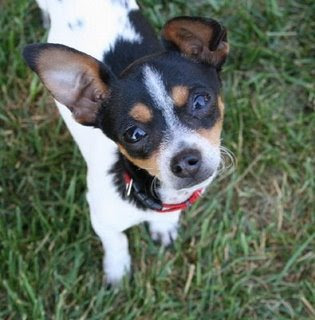 But, sadly, no one camps out for the pit bulls. Most of the cages of the shelter are filled with them because apparently the people around here who own them don't get them spayed or neutered and let them run free. I'm sure it's a nice life for a dog until it gets lost or hit by a car or scooped up and taken to the "shelter," where it is surely doomed to die.

That is so nice of you to take that puppy !!!

Pit bulls ... they are nice dogs they just get the bad rap from their bad cousins.

My mom took in a rescue who was mostly pit bull. I ended up taking her after a few years when Mom got ill.

One of the nicest dogs ever. She shook too ... scared of her own shadow.

Rescue dogs are the best !!!

Call me the eternal pessimist but I'd be willing to bet the purebred pitbulls are always adopted. There's money to be made in breeding and in a sport- that-shall-remain-nameless.

I may end up in prison someday if I ever find out about a locale where the above unnamed sport is being engaged in and wagered upon. I'd be willing to become a private rogue citizen undercover agent to bust some of those epithets-which-shall-remain-nameless. Or at least do some damage to them before they took me out.

Please promise you'll visit me in the big house? Please to bring pictures of my grandchildren and pets and some of your famous South African curry?

What a lucky little dog. Blessings on Bucksnort for her tenacious spirit.

Very sad for those pit bulls. I was around one for a little while in Alaska and it was a sweet dog. Actually, the dogs are as sweet as any other dog (my hairdresser has one and she just loves it) but the problem is the owner. I am disappointed to see the number of pit bulls (what an awful name for a dog) in the dog pound. More here than any place I've lived (where I would go to the dog pound).

Bertie is a cutie, for sure. And good for Auntie Bucksnort for her determination. So glad y'all got Bertie instead of the dishonest woman. Shame on her for telling lies in front of her daughter.

I got educated on pit bulls through both my parents having a cross of one when I was growing up and a lady in a place I used to chat who raised them loved them and educated about them. It's bad owners not bad dogs even for a breed that has the potential to be overly 'protective'. It's a shame some people have pets at all. Your new adoptee is so cute.

I went to a Pet store while back while they were having an adult dog adoption day. I had to get a product but then I saw the dogs and their woebegone little faces. These were people's pets that they had to let go and it just broke my heart. Right now with a grandson allergic to some breeds of dogs and three cats (one geriatric), I was in no position to adopt a dog but it broke my heart