Love Over Scotland; A Logophile's Delight 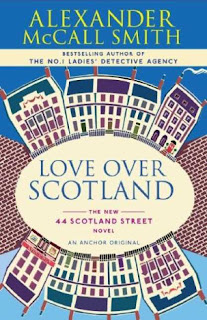 It's very easy... [to] increase the sum total of human happiness. By these little acts. Small things. A word of encouragement. A gesture of love. So easy. ~Alexander McCall Smith, in Love Over Scotland.

I've just finished reading this title, the third novel in the 44 Scotland Street series, and what a lovely experience it has been. But here's the thing: I've been reading novels since I was 8 years old--reading and reading and reading. The books I have read must number in the thousands by now, wouldn't you think? And I have never come across a book with so many words that are totally unfamiliar to me. Perhaps I have seen one or two of them before--palimpsest and autodidact, in fact, come to mind--but I still had no idea of the meaning of these words and phrases.
But here's a warning--I am in love with words (logophile = lover of words); with their spelling and pronunciation and their origins. I believe it started when I was a child, an insatiable early reader, and the passion only grew when I was first introduced to Middle English in a course on Chaucer. That class, taught by a nun dressed in a habit, was held in a very cold morning room with a marble fireplace, a room where the five students sat around a wicker table, and was conducted almost entirely in Middle English. Once I heard these words from the Prologue to the Canterbury Tales, I was a goner (although very worried about being able to pass the course):
Whan that Aprile with his shoures soote
The droughte of March hath perced to the roote
And bathed every veyne en swich licour
Of which vertu engendred is the flour...

Just take a look at these words and phrases from Love Over Scotland. Some are obviously in the Scots language and some are what I like to think of as more obscure English words. All are lovely and ha! totally unfamiliar to SpellCheck, which gives me some relief about my ignorance.
fantoosh (flashy, showy)
making siccar (making sure or certain)
...[the eyes of the moudie] would break ilka heart, but no the moudie man's... (ilka means each or every, and I believe the moudie man is the mouse or mole catcher)
palimpsest (a manuscript, usually of papyrus or parchment, that has been written on more than once, with the earlier writing incompletely erased)
orra jumper (odd pullover sweater)
bogles (supernatural beings)
anglice (in the English form. For example, in Italy, the city is called Firenze; anglice, Florence)
godowns by the river (in India or East Asia, a warehouse, especially by a river)
yonks and yonks (ages, a long time)
...run into a group of neds (a derogatory term for certain young people in Scotland, hooligans)
glens and straths of Scotland (a glen is a deep valley--I've heard the word a million times and have never had a mental picture of its meaning; a strath is a river valley, wide and shallow)
on the machair of a Hebridean island (a stretch of low lying land adjacent to the sand of the seashore)
his hodden skirts (coarse homespun, undyed woolen cloth of grayish color)
quinquennium (well, I figured that one out--happening every five years)
a study being rendered completely otiose (serving no useful purpose)
haud yer wheesht (shut your mouth, be quiet)
walked with a hirple (a limp)
smelling of school jotters (small notebooks)
ockers (used both as a noun and an adjective for Australians who talk and act in an uncultured manner)
lawyers in their stripit breeks (striped trousers)
[she was] a resourceful autodidact (a person who has taught herself)
I ken he's no a guid man (sure, you can work this one out. Doesn't it sound lovely, though? I know he's not a good man)
it wisnae meant to be funny (was not)
... reminiscent of the shades with which the Victorians liked to paint the anaglypta (thick embossed wallpapers, designed to be painted)
Posted by clairz at 7:00 AM

Words are fascinating and there are a lot here that I never heard before either. It would take me forever to read the book because I would have to look up all the words! I used to be a great speller but as I get older it seems I have to look up words I would never think about years ago. Guess my memory is not what it used to be.

Didn't our family try desperately to stage several interventions in an effort to curb these logophilic tendencies that were being exhibited at such a disturbingly early age? "Put the book down, step away from the book, come out here and watch teevee with your family!" How many times did these very words echo throughout our home?

Alas and alack, all to no avail. Obviously our loving efforts fell upon lit-addled deaf ears. At the end of the day, we failed. You wouldn't put the book down, you wouldn't step away from the book. Instead, you rebelled and read and read and read and eventually became a beloved children's librarian and made a huge difference in many many little lives!