Power of the Dog (This Time It's Really About Dogs)

Unlike the post of a few days ago, The Power of the Dog, which was about a book that wasn't about dogs, this post is actually an update on little Bertie-Pierre, who joined our family recently and who starred in these posts:
The Arrival of Bertie-Pierre
Sweet Little Bertie
But No One Camps Out for the Pit Bulls
I just wanted to share a couple of photos with you. The first is of our Bertie, back when he was temporarily named "Rio" by the dog catcher and was shivering in his cage at the kill shelter, frightened by the clamor of the big barking dogs and the sense of hopelessness that permeates the place. 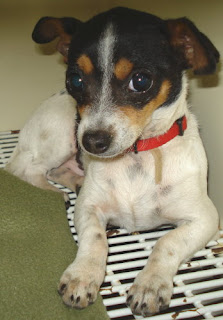 The second is of Bertie--now safe and much loved in his forever home--with his new best (and somewhat larger) friend, Leny. They are resting with Leny's beloved sock monkey (or what's left of it). In our house, the dogs nap on the sofas and the humans sit nearby on hard chairs, all the while admiring the wonderful pups. 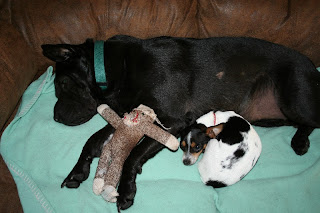 Oh my, that is the sweetest picture of Bertie with his new best buddy. (And I love Leny's beloved sock monkey!) God bless little Bertie...and God bless you and your sister for giving him a happy home and a happy life at last.

What an adorable little boy pup! He is as cute as he can be. And he couldn't have landed in a better, more loving home! I love happy endings.