Long-Nebbit Women and Babies That Girn 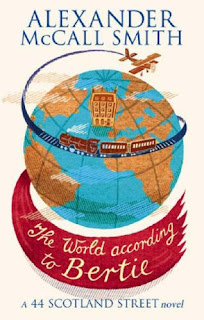 Angus wanted to paint something which spoke to that distinct human quality of kindness that, when experienced, was so moving, so reassuring, like balm on a wound, like a gentle hand, helping, tender. That was what he wanted to paint, because he knew that that was what we all wanted to see. ~Alexander McCall Smith, in The World According to Bertie.
Once again, I've come to the end of another in the 44 Scotland Street novels by Alexander McCall Smith.
I don't believe that I have mentioned before that these novels started as a single serial novel in the Edinburgh newspaper, The Scotsman. Oh, what I wouldn't give for such entertainment over my coffee every morning. For now, I have to make do with reading the lost and found ads in our tiny local newspaper. I find much amusement there:
1. Found, pet bull wearing leash and bow (it turned out to be a disgruntled pit bull, recently escaped from the groomer's)
2. Found, party poodle, black and white (apparently, it was a parti-colored poodle, although I pictured him wearing one of those little party hats one gets at the dollar store here)
3. Lost: Dockshand/Duckshund/Weenie Dog (you often see all three variations in the same day's column)
I keep a little notebook by me when reading McCall Smith's books. When I come to an unfamiliar word or phrase, I'm afraid that I still "hop over it," in the exact manner of my youth. That is to say, I do my best to discern its meaning by its context, and then move on. However, I believe that I show my great years of maturity now by at least writing it down to look up later.
I won't subject you to whole list from The World According to Bertie--you've read enough of such lists here lately. I will, however, put a few of the more sparkling examples of McCall Smith's art down at the bottom of this page.
In the meantime, I would like to recommend that you hop over to this wonderful author's website to read an interview with him, listen to some delightful music, see photos from his trip to Botswana during the filming of The No. 1 Ladies' Detective Agency, and to look around at any number of other fascinating features.
A Tiny Part of My List; Heretofore Unfamiliar Words
and Phrases from The World According to Bertie
... a wee parliament... full of high heid-yins and tsars
there is a thrill which marks them out from the quotidian
striking adjectival saliences
none of your chippan fires over there
an echt philanderer
a very couthie place
... it's a funny wee place, very narrow, with a bunch of crabbit regulars...
a long-nebbit woman
a jumble of cromachs
[the baby] tended to girn
soor plooms (this may have been in a discussion of fruits)
laws of paternity and aliment of puppies
Posted by clairz at 7:00 AM

Hi Clairz, I will check out the website. Yes, it was me that told you about the book Escape by Carolyn Jessop. I could not put it down. It is about her life as a teenage mother married to an older man in the FDLS church and how she finally escaped. There is another one called Church of Lies written by Flora Jessop that I plan to read also.